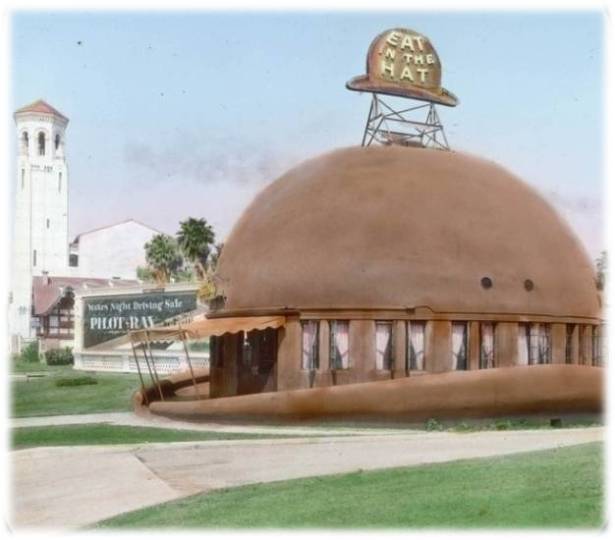 In her memoir, Swanson on Swanson, Gloria recalls being surprised to hear, on returning to Hollywood with her new husband Henri, Marquis de La Coudraye (m. 1925) in March 1927 after a two year absence, that her second ex-husband, the father of her daughter little Gloria, had opened a restaurant. Gloria’s friend, actress Lois Wilson, advised Henri to avoid it. Not because the food was lousy but because Wallace Beery, Gloria’s first ex-husband (m. 1916-1919) was a known regular. “The very notion of my three husbands sitting down to a meal together made her dizzy.”

The restaurant was the Brown Derby, located at 3472 Wilshire Blvd. between Mariposa and Alexandria avenues, across the street from the fashionable Ambassador Hotel where Somborn resided. He submitted the building permit application to the city on November 17, 1926. Raymond J. Kieffer is listed as architect. In March 1927, the “Eat in the Hat” electric sign was added to the roof.

No doubt the unusual shape of the restaurant attracted a lot of attention even though buildings shaped like giant objects were not a novelty in Los Angeles at the time. But if people came out of curiosity, they stayed for the food, which quickly gained a reputation for being the best quality, simply prepared. It was also known for its pretty waitresses and their uniforms with the bell-shaped skirts. It became the spot for a late night snack after an evening of dancing at the Ambassador Hotel’s Coconut Grove nightclub.

Wilshire Blvd in 1928. The original Brown Derby can be seen mid-block on the right. Photo: Water & Power Associates.

In 1934 Gloria Swanson had two more ex-husbands and there were two more Derbies- one in Hollywood and one in Beverly Hills- though the original was the only one to be shaped like a hat. Herbert Somborn died in January, leaving his shares in the Brown Derby Co. in trust to his daughter and the restaurant’s operations to longtime manager, Robert “Bob” Cobb. Gloria Somborn Daly would later take an active role in running the Wilshire Derby.

The new hat Brown Derby at Wilshire Blvd. and Alexandria Ave. had a patio café along the Wilshire frontage. The roof sign is the original, moved here from the old location. The wording was later changed to read simply “The Brown Derby.” Photo: LAPL collection.

In early 1936 the original Wilshire Brown Derby closed and a newly constructed hat-shaped Derby opened about a half-block away, to 3377 Wilshire, on the corner at Alexandria Ave. Its architect was Carl Jules Weyl. The “Eat in the Hat” roof sign was moved from 3472 according to city building records, but the rest of the original hat was demolished in May 1936.

2 thoughts on “The Brown Derby Restaurant”