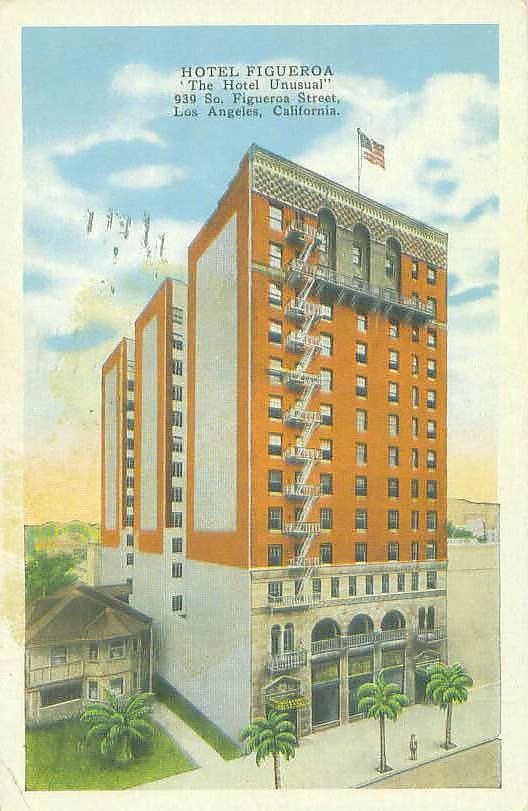 The YWCA’s Figueroa Hotel opened at 939 S. Figueroa St. on August 15, 1926 with a gala dinner dance in the Fountain Floor ballroom. The “Hotel Unusual” catered to business, traveling and professional women and their husbands and children.

Designed by Stanton, Reed & Hibbard, the 13-story Spanish-style hotel had its groundbreaking ceremony in September 1925. This was the second phase of development for the YWCA, which had added its pool and gymnasium to the rear of the lot in 1922. Hotel guests had use of the facilities. 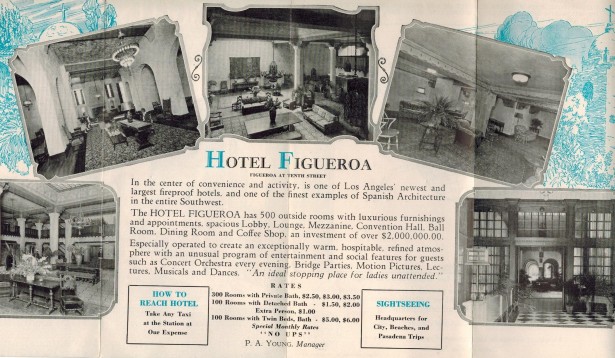 Arriving ladies could take a taxi to the hotel from the train station at the YWCA’s expense. On-site amenities included a beauty salon, coffee shop and dining room, convention hall, ballroom and newsstand. The lobby (or sala de reception) featured wrought iron and draperies of goldenrod satin with black patent leather trim. For visiting husbands there was a men’s smoking room and shoe shining parlor. Activities included bridge classes, motion pictures and concerts. The hotel staff also conducted sightseeing tours. There were three retail shops on the ground floor street frontage, initially leased to a dress shop, a florist and a jeweler.

The ladies’ retiring room off the beauty salon, furnished in rose and green with wrought iron lamps. USC.

The YWCA was struggling financially by 1928 and held fundraisers to try to hang on to the hotel. Ultimately, however, it was sold to private operators in the early 1930s. It continues to operate as The Figueroa Hotel.

2 thoughts on “The Hotel Figueroa”