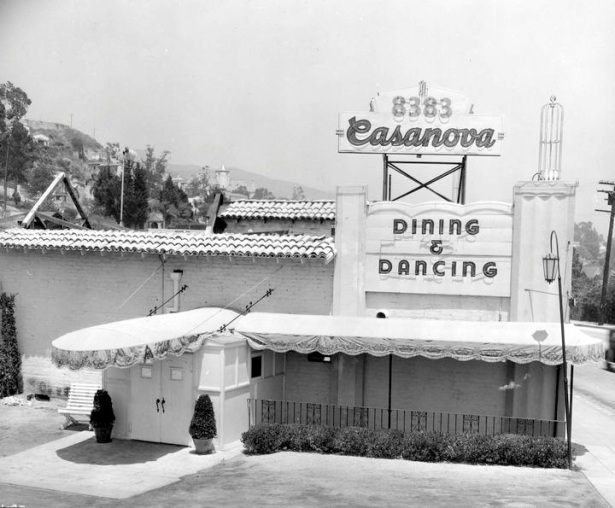 8383 was situated on a large parcel owned by the Coyne family that straddled the boundary of what was the the city of Los Angeles and Los Angeles County territory. It had previously housed Prohibition-era nightclubs, the Moscow Inn and Club Ballyhoo, addressed as 8353 and 8373 respectively. With a key location across from the Sunset Tower apartments, 8383 Sunset seemed a sure hit, but like many nightspots on the Strip, its history is one of high-turnover and frequent name changes. 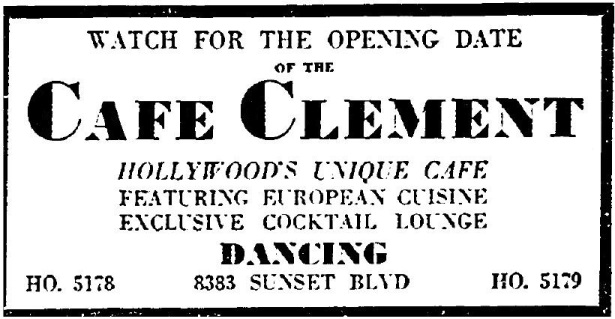 8383 debuted as Café Clement in November 1934, one of the nightspots that would earn this stretch of Sunset its nickname, “the Strip.” The exterior of the building was eclectic Spanish-Deco; the cuisine was French-Italian. Café Clement scored a coup in bringing out entertainer extrordinaire Martha Raye from New York for an exclusive singing engagement in February 1936. That same month, Café Clement became the Club Casanova.

Cafe Clement imported entertainer Martha Raye from New York in February 1936. The club changed its name to Club Casanova during her engagement. 2-13-1936

The Strip snaking by 8383 Sunset Blvd. c. 1937, captured during the brief time that it operated as Club Casanova. The entrance to Sunset Tower apartments is on the right. LAPL.

In May 1937 the Club Casanova closed “for rebuilding.” Before the year was out it had undergone another name change, to U-Gene’s Bagdad with a “Harlem in Hollywood” theme.

The Sports Circle had its grand opening October 26, 1939.

As of March 1940, 8383 was operating as the real estate office of William R. “Bob” Coyne, a one-time informant, along with underworld figure Jimmy Utley, in cafeteria owner Clifford Clinton’s effort to investigate Los Angeles vice operations, which led to the recall of Mayor Frank Shaw in 1938 and supposedly caused the big shot LA gamblers and Strip nightclub owners like Guy McAfee and Farmer Page to go stomping off to Las Vegas. Coyne had erected anti-gambling, anti-Clover Club billboards on the Casanova Club property during this period, replacing earier ones that had been burned. In September 1937, Coyne was accused of shaking down nightclub owners in exchange for not turning them over to the vice committee. McAfee had used the same mob tactic against Coyne’s friend, Dr. A.M. Wilkinson: when the evidence is against you, attempt to discredit the investigators. Coyne pleaded not guilty and fought the accusations, then suddenly in November changed his plea to guilty in a suprise move. He was given a jail term and fined. 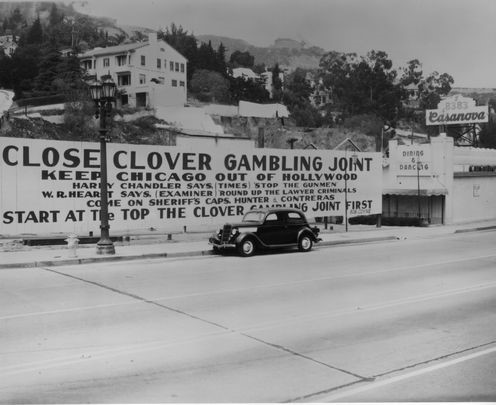 “Keep Chicago out of Hollywood- Close Clover Club Gambling Joint.” Anti-gambling signs on a vacant lot owned by the Coyne family, adjacent to the Casanova Club, 8383 Sunset Blvd, c. 1937-1938. Previous anti-vice signs with a similar message located on other Coyne vacant lots at 8381 and 8373 Sunset (site of Club Ballyhoo) mysteriously caught fire in the wee hours of August 27, 1933. LAPL.

In February 1940, Coyne accused Deputy Sheriff and vice squad head George Contreras of owning a piece of a slot machine and gambling racket. Contreras (who was around the same time being accused by Guy McAfee associate Ann Forrester of shaking her down and was implicated in the Mumsie McGonigal/Chito Sasso prostitution bust) laughed it off and was ultimately not charged. The case went to the grand jury. Jimmy Utley testified in the case on March 26. The day before, Coyne’s real estate offices at 8383 had been burglarized. LAPD detectives investigated the crime, the property being partly within LA city limits. As of 1943 it was a failed carpet business.

In January 1949, again operating as a nightclub, 8383 was the scene of one of the Strip’s many celebrated brawls, this one involving movie stunt flyer/playboy/race car driver Joel W. Thorne. After suffering fire damage in December 1950, it was repaired and converted back to office use.