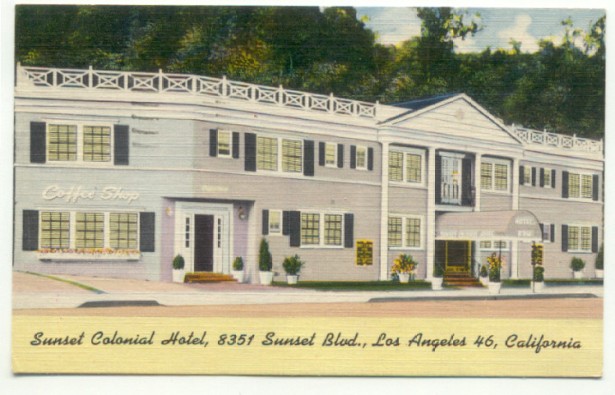 As of August 1945 there was a restaurant at this address, St. Donat’s, one of several cafes/nightclubs on the Strip cited for violation of wartime meat rationing policy.

Nothing much was heard of 8351 again until November 5, 1950, when Michael Rockwell’s 2-story Sunset Colonial Hotel opened, next door to Mad Man Muntz’ car lot.

It seems to have been a trouble spot almost from the first, with numerous reports of arrests taking place here on theft and various vice charges.

Most notably was the apprehension of James Fratianno by the sheriff’s Sunset Strip anti-gangster squad on August 28, 1952 for suspicion of robbery.

Jimmy “the Weasel” Fratianno was long known to Strip law enforcement, ever since he and 5 other “middle west hoods” were picked up by the LAPD gangster squad in 1947. Most recently, he had been booked on suspicion of murder in connection with the August 6, 1951 double slaying of Tony Trombino and Tony Brancato (the “two Tonys”) in Hollywood. While the LAPD had Fratianno in custody on the robbery charge, Sheriff’s deputies took the opportunity to quiz him about the August 18, 1948 death of Mickey Cohen’s henchman Harry “Hooky” Rothman at Cohen’s now-defunct Sunset Strip haberdashery as well as the July 20, 1949 failed ambush of Cohen outside 9039 Sunset. Fratianno revealed nothing and was ultimately released (1).

The robbery charges were quickly dropped, but Fratianno was fined $100 by the Beverly Hills Municipal Court for failing to register as an ex-convict, a law passed in 1933 after a spate of gang violence. The judge suspended $75 of it on the condition that Fratianno stay out of the Sunset Strip area.

In August 1959, another resident of 8351, Lloyd D. Woods, aka Sailor Jack, a known gambler/bookmaker, was arrested here on charges of grand theft and given a prison term for his part in a past-post betting scheme along with partner “John M. O’Hara,” an alias of Jack Whalen (“the Enforcer”) (2).

Other arrests and advertisements indicate that 8351 was still here and functioning as a hotel into 1963 at least. Then it was just… gone. In late 1975, a 50-year-old Union Pacific passenger car was moved onto the apparently now vacant site and opened as Carney’s restaurant, which it remains today.

(2) Whalen wouldn’t serve his time. On December 2, 1959, out on bail while his case was appealed, he was murdered at a restaurant in the Valley. Mickey Cohen, who had been dining at the same spot at the time, was questioned.