In June 1925, 23-year old LAPD officer “Eddie” Edwards went to see a man about a dog. It changed his life forever. The man was Frank Cornero, brother and chief lieutenant of “Bootlegger King” Tony Cornero and Edwards was there to arrest him.

It seems Frank and a neighbor got into a dispute over Frank’s pet bull terrier. The neighbor, whose name happened to be Bassett, charged that Cornero had pulled a gun on him. When the case came up in court in January 1926, Frank got 90 days.

The next heard of Edwards was in August 1926. The now EX-police officer was working for Tony.

“Eddie” Edwards, born Ernest Richard Edwards on November 4, 1901, was arrested on August 28 with the Cornero’s sister Katherine (as “Mrs. Catherine Martell”) at 2403 Wellington Rd., charged with possession of 115 cases of liquor and 25 cases of wine.

Edwards was picked up again in October near 25th & Maple with a truck holding 92 cases of liquor valued at $10,000. The papers identified the former policeman as a “henchman” of “bootleg baron” Tony Cornero. 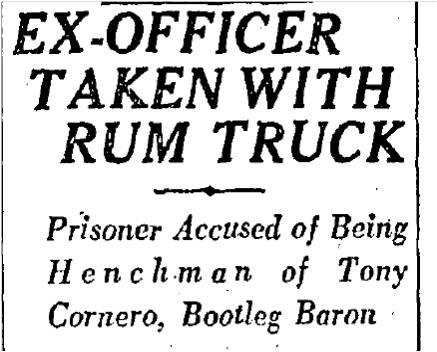 Tony was by now much sought-after by federal prohibition agents and had gone underground. In December 1926, he was named in a sweeping indictment of local rum-runners and became a fugitive until turning himself in to U.S. Marshals on October 28, 1929. He was sentenced to two years at McNeil Island.

But it was hardly the end of the Cornero liquor operations. Frank and Katherine carried on in Tony’s absence. Edwards remained a loyal part of the outfit.

On November 17, 1931 he and Frank Cornero were charged with liquor law violations and held by the LAPD’s gangster squad as part of an “intensive campaign to keep reputed gangsters and liquor dealers from extensive operations in Southern California.” It failed.

In July 1932, federal agents found 376 cases of whiskey in a warehouse at 6803 Stanford Ave. Through a months-long investigation they eventually traced it to Katherine Cornero’s home at 4908 Victoria Avenue. Thanks to a tapped phone line (then legal), the officers heard Katherine taking orders for delivery of the booze. Katherine, Frank and Edwards were arrested for conspiracy to violate federal prohibition laws. Charges against Edwards were subsequently dropped but Katherine and Frank were later found guilty.

1933 was a stressful time to be a bootlegger. National prohibition was coming to an end. Beer sales were legalized in March but hard liquor and spirits remained subject to the Volstead Act until December 5. Amidst the resulting tension came a rash of gang violence. In May, two suspected bootleggers, “Sprout” Winthrow and Victor Ayers were found strangled to death. Frank voluntarily submitted to police questioning in the matter but was not held. In August, two “eastern gangsters,” Abe Frank (alias Harry Mackley) and Fred Kitty (alias Fred Kelly) were gunned down at the Bella Napoli Café on Vermont Ave.

Less than two weeks later, on September 4 at around 10:45 p.m., a hijacker named Axel Anderson was shot dead in the streets with a .380 automatic. Witnesses saw two men in the usual “dark sedan” pull up alongside Anderson’s Ford coupe and fire at him. Anderson pulled over and ran up Gramercy Place. His attackers gave chase, dropping Anderson with another shot near the corner of 10th & Gramercy.

Police investigating the murder picked up Eddie Edwards and a partner at a garage and took them into technical custody for questioning. They’d been looking for their stolen liquor, Edwards admitted. He identified Anderson as one of three men who had stolen a truckload of 70 cases of whiskey from them less than two hours before the murder. The hijackers had posed as federal prohibition agents, he added.

Based on Edwards’ information, police theorized that the trio had had a falling out and Anderson was “put on the spot” by his partners. But, although police hinted that arrests were imminent, the murder went unsolved.

In December Prohibition was repealed. Some ex-bootleggers turned to other illegal sources of income. Others, like Edwards, never got into trouble with the law again. His association with the Corneros, however, continued for the rest of his life.

Because what the papers never reported was that Ernest Edwards was more than Tony’s henchman- he was family. He and Katherine Cornero were married. Edwards died on October 24, 1959, having outlived his notorious brother-in-law by four years. Katherine followed six months later. They are buried together with Tony and Frank, who died in a car accident in 1941, and the Corneros’ mother Madeline at Inglewood Cemetery, Los Angeles.

One thought on “Eddie Edwards”