Los Angeles papers had been reporting the antics of Edward “Spike” O’Donnell for years. Noted for his many brushes with death at the hands of his rivals, the nattily-dressed O’Donnell was always good for a pithy quote or two.

In 1925, O’Donnell had been the intended victim in what is believed to be the first use of a Thompson sub-machine by a gangster in Chicago (or possibly anywhere else), specifically Frank McErlane, then aligned with the Torrio-Capone gang. O’Donnell survived the attack by dropping to the pavement and feigning death.

By May 1926, when a special grand jury on crime hauled him in for questioning, O’Donnell had escaped at least two further attempts on his life. His brother Walter and several of his gang members were not so lucky. Spike shrugged off the attacks and in typical gangland fashion, refused to name his would-be assailants.

“I don’t know who they were. They just come driving up with their man-‘o-wars pointed at me and let go. Why? I dunno. I am not in the racket and I never was. I’m a law-abiding citizen. But nobody has got me scared. I never sent no peace treaties to those dirty rats who tried to put me out. Spike will take care of Spike.” 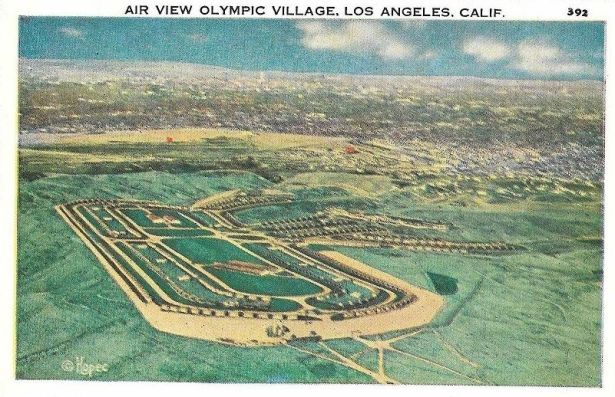 Like Bugsy Seigel, O’Donnell came to Los Angeles with his wife and children to take in the 1932 Summer Olympic Games. After several weeks, local police “discovered” his presence. Spike insisted he was here strictly as a tourist, to see the games and go to church regularly. 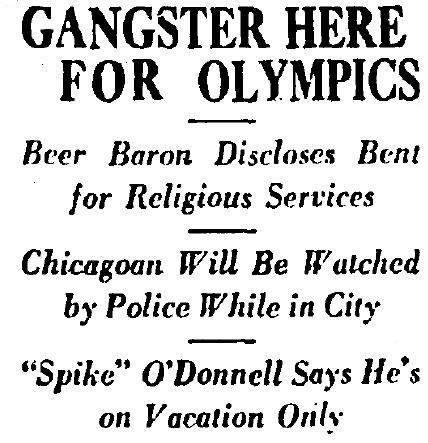 “There will be no effort on my part to engage in the beer business here in Los Angeles. I am here as any other Olympic visitor, except that I also intend to go to church probably more often than the average person.” O’Donnell assured the authorities.

O’Donnell extended his visit well after the games ended, however. He liked the climate, he said. Wearing a diamond ring that “shed about the same amount of brilliance as the beacon atop our city hall,” in late August he met with L.A. Times reporters at a “famous Hollywood café” (probably the Brown Derby) and over pancakes fielded questions “with the ease of a Congressman on the eve of election.”

The journalists were especially interested in his views on Prohibition, which Franklin D. Roosevelt, the recently nominated Democratic Party candidate for president, wanted to abolish if elected. In a soft voice with a hint of Irish brogue, he warmed to the subject:

“Prohibition will be a thing of the past within two years and I’ll be glad of it….The way things are not we are like chickens going to the butcher shop- if you know what I mean. Most of us are against prohibition became we have had enough of politicians.”

How did he like the Games? “The Games were great. The best show that I ever saw or hope to see. Athletic sports are a great racket. I’m for them.”

O’Donnell said he had no bodyguard with him and went to parties with his many friends in the motion picture industry. He insisted he wasn’t staying, leveling a low blow: “The beer in this town is rotten.”

As promised, O’Donnell returned to Chicago, where in October 1933 he spoke before a Senate Committee that was making suggestions to Congress on laws to combat crime and racketeering.

“I would like to smack the guy who said I carried a machine gun in a paper sack and offered to kill other guys for $30,000….Crime doesn’t pay! Me kill anybody? There isn’t money enough in the world to make me so a thing like that. Of course, there’s self-defense. Somebody said- maybe he was just a smart racketeer- that self-preservation is the first law of humanity.” (See film footage of O’Donnell’s speech).

Prohibition was fully repealed in December 1933 as O’Donnell predicted. He returned to Los Angeles in April 1934, but his reception was less welcoming this time. Unfortunately for Spike, the LAPD was in “round up eastern gangsters” mode. Or perhaps the town wasn’t big enough for two ex-bootleggers: Bugsy Siegel, too, made a return visit in 1934.

O’Donnell was arrested in a Hollywood Boulevard bar and charged with vagrancy and “keeping late and unusual hours.” Nattily dressed as usual in a “freshly tailored black-and-white checked suit with checked tie, gray hat and black shoes,” O’Donnell hardly looked the vagrant but nevertheless pled guilty.

Now ostensibly operator of a trucking firm, he said he’d come to Los Angeles on legitimate business, and wanted nothing to do with the rackets or racketeers. “”I got as much use for those dirty rats as some of the police have….I don’t know why the police wanted to pick me up this way, unless they just wanted to roust me. They don’t have to worry about me staying here. I got no reason to stay in Los Angeles any longer than I have to.”

He called the city jail “the crummiest jug I was ever in” and when offered the choice of spending six months in it or leaving town, he opted for the latter. He was placed in the custody of LAPD Special Investigator Dick Lucas and put aboard the next Chicago-bound Sunset Limited, much as his onetime rival Al Capone had been in 1927.

If O’Donnell ever returned to Los Angeles, his visits went unnoticed. He survived at least one other attempt on his life, in 1943 and died of a heart attack in 1962.

In the ‘teens O’Donnell had worked for the Motion Picture Operators Union.

Lucas had resigned in 1929 at the recommendation of the grand jury for his part in the Carl Jacobson case, but had recently been reinstated by Chief of Police Chief Jim Davis, himself restored to power in 1933 after taking a forced demotion in 1929.

One thought on “Spike Takes in the Olympics”