With the war over, Los Angeles- like everybody else- looked forward to the return of new passenger car production.

According to the V.P. of Chrysler Motors of California at the time, before the war, auto assembly plants in Southern California had employed 4900 persons and assembled 850 cars a day. Passenger car production ceased in early 1942, and the big automakers switched to defense work. In the summer of 1945, with victory in Europe achieved, some automakers began to manufacture small numbers of passenger autos again. Then following V-J Day, on August 24, 1945, the War Production Board gave automakers the green light to resume unlimited production.

In September 1945, GM’s South Gate plant turned out the first Chevy truck to be assembled since Pearl Harbor. Assembly of Buicks, Oldsmobiles and Pontiacs was likewise expected to get underway soon.

Also in September, the Ford assembly plant at Long Beach began preparations to go back to work, having been leased by the Army Air Forces as a storage plant for the duration. The first passenger car, a tudor sedan, would be completed, fittingly, on December 7, 1945. 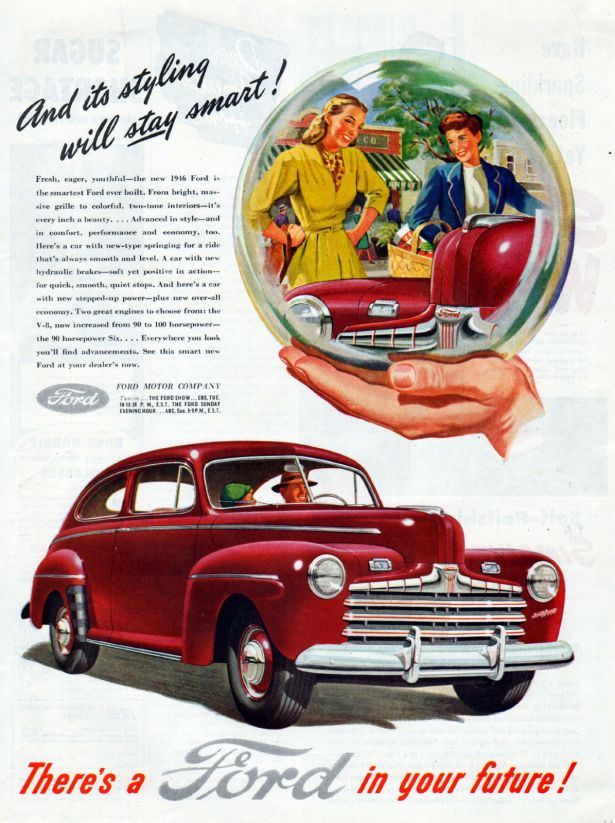 There may have been a Ford in your future, but it was not likely in your driveway in 1946.

In October, the first postwar Buicks were displayed in Flint Michigan. They looked long and low, with “airflow’ fenders extending along the door panels, and chrome-plated grills with wraparound bumpers. The first batch, mostly Series 51 Super 4-door sedans, arrived in Los Angeles for display at the Howard Automobile Company’s showrooms on November 9, 1945. They also had a special display at the Bullock’s department store’s men’s shop on Hill Street November 19-28, 1945. As a loyal Buick man, Avery would be sure to get down here and see them.

In December, while those first new Fords were being readied for delivery out of Long Beach, Mercury and Lincoln dealers gathered at the Ambassador Hotel for a preview of the new models. Mercury cars went on display to the public on December 14 at Tupman Motors, Figueroa and Jefferson. 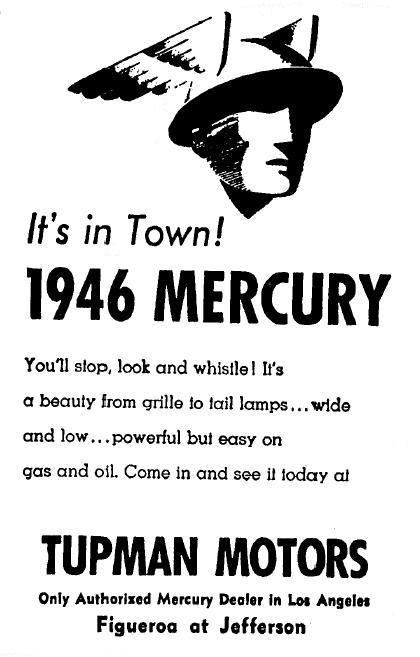 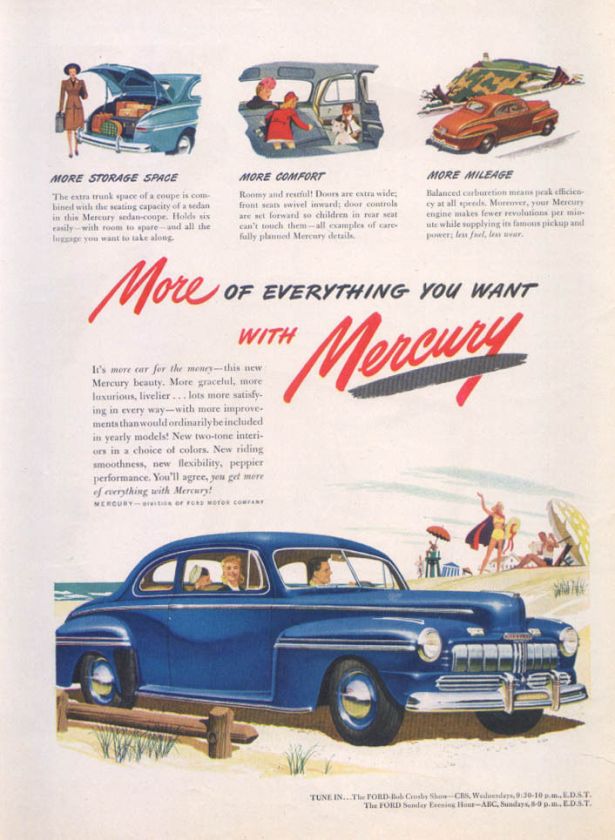 “More of everything you want with Mercury,” 1946 (except, perhaps, a Mercury).

A couple weeks later, on January 3, 1946, Ford broke ground for its new assembly plant at the southwest corner of Eastern and Slauson, across from the existing Chrysler assembly plant. Benson Ford and his wife were on hand to shovel the first spade of earth. This plant would assemble Lincolns and Mercury cars, at a rate of 250 a day. 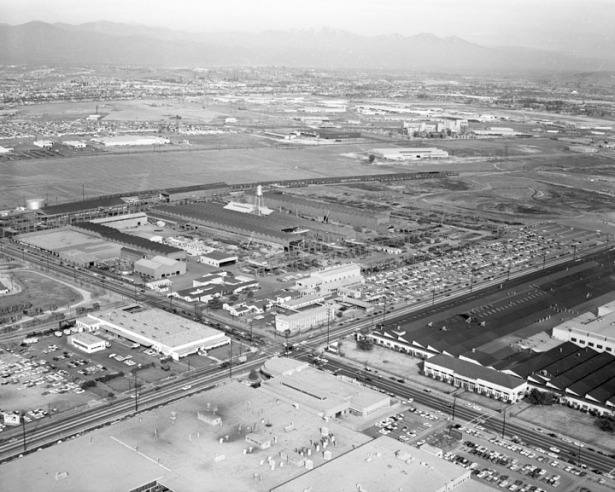 Ford’s Eastern and Slauson assembly plant (lower left) opened in 1948 across from Chrysler. Pictured here in 1955, it closed two years later when both this and the Long Beach plant were consolidated and moved to Ford’s Pico Rivera plant. LAPL

“The First By Far with a Postwar Car.” The 1947 Studebaker Champion. 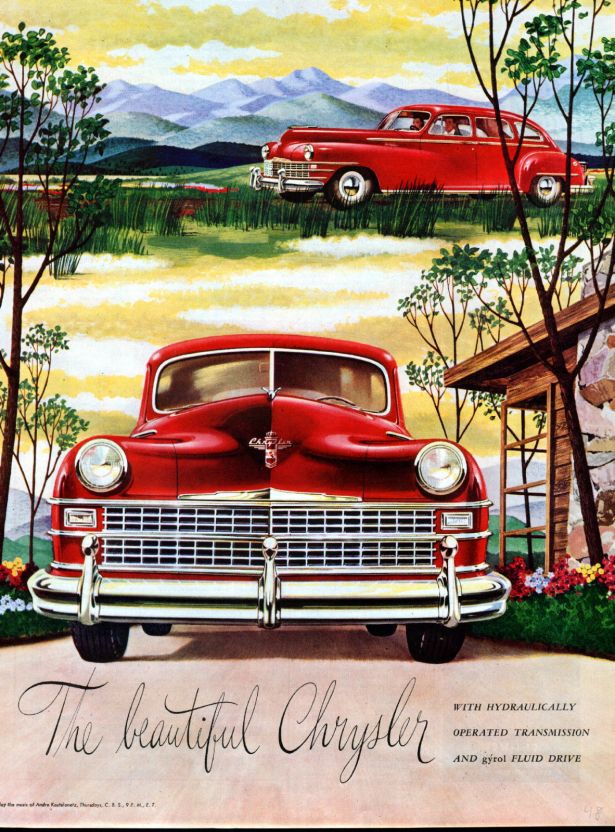 The beautiful Chrysler with fluid drive, 1946.

The Sportsman wood-sided convertible, Ford’s answer to Chrysler’s Town and Country, was advertised in March 1946. 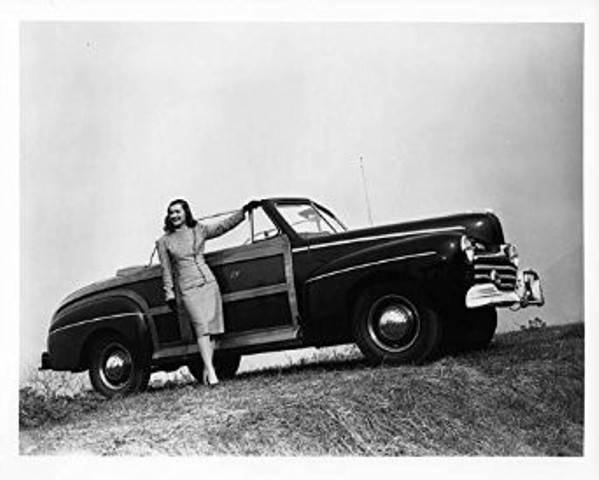 Ella Raines with a 1946 Sportsman convertible, customized with her initials.

For all the excited promotions, however, automakers were having a tough time keeping up with the demand due to materials shortages, delays in parts shipments and other factors. Chrysler would have to shut down its passenger car production at the Los Angeles assembly plant on May 10. Ford’s Long Beach plant did the same on May 17.

In April, Tupman Mercury was having to explain to customers that it was “making every effort to give the earliest possible delivery of new cars to our patrons.”

Don Lee Cadillac, headquartered at 7th and Bixel streets was displaying the new Cadillacs in April. 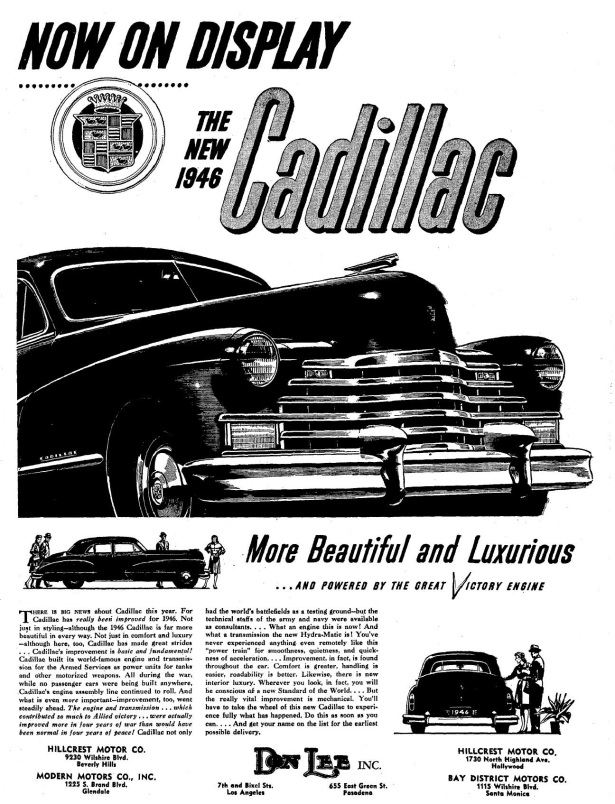 “When choice is unrestricted” Cadillac 1946.

Chrysler exhibited its fabulous new Town and Country wood sided model at the Biltmore Hotel’s Galleria from April 15-18, 1946. The cars had not yet been placed in dealers’ hands, however. 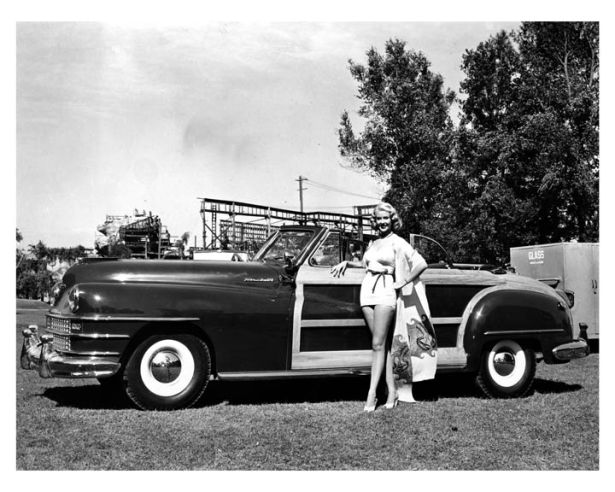 Marie McDonald posing with a 1946 Chrysler Town and Country convertible. 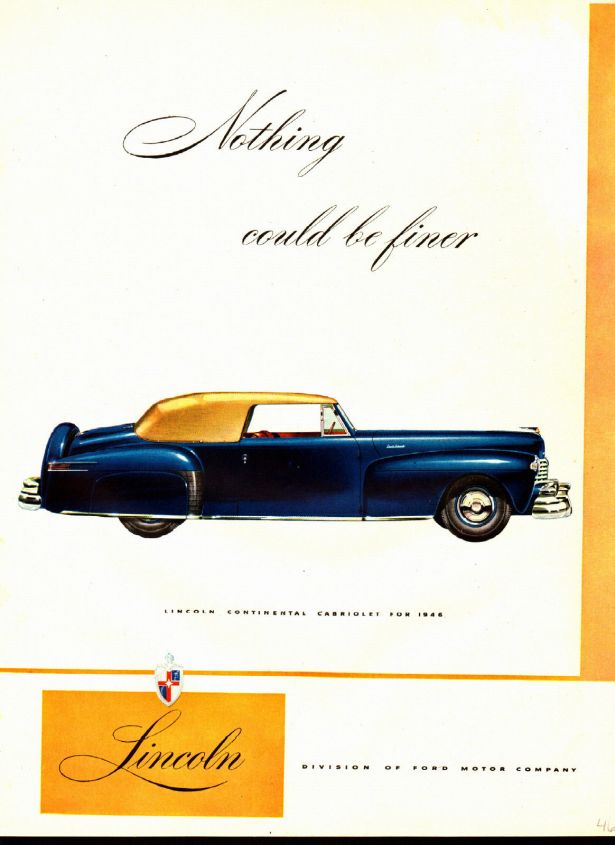 “Nothing could be finer” (except actually getting your hands on the car). 1946 Lincoln Continental Cabriolet. 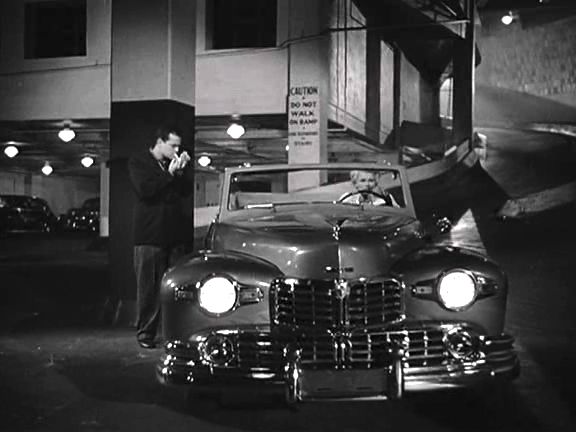 Rita Hayworth at the wheel of a 1946 Lincoln Continental cabriolet from The Lady from Shanghai IMCDB.

Between June 28-30, industrialist Henry Kaiser and partner Joe Frazier exhibited the 1947 Kaiser Special and the 1947 Frasier at the “Mad Man” Muntz Car Co. 11th and Figueroa. Kaiser, who was engaged in shipbuilding during the war, was also building affordable housing in the Los Angeles area with Fritz Burns as Kaiser-Burns Homes.

That same month, GM’s South Gate plant resumed assembly. Studebaker’s Vernon plant, having spent the war years making bomber engines for the Army and Navy, began reconverting for passenger car assembly, and expected to be able to start turning out 1947 models within a few weeks. Ford anticipated that Long Beach would be running again in July.

The automakers decided to take a straightforward approach with customers about their limited delivery situation.

1946 Hudsons went on display here in August, but as the company explained: “Hudson is stepping up production of 1946 cars as fast as material supplies permit. Still, demand is ahead of our ability to deliver.” 8/4/46. 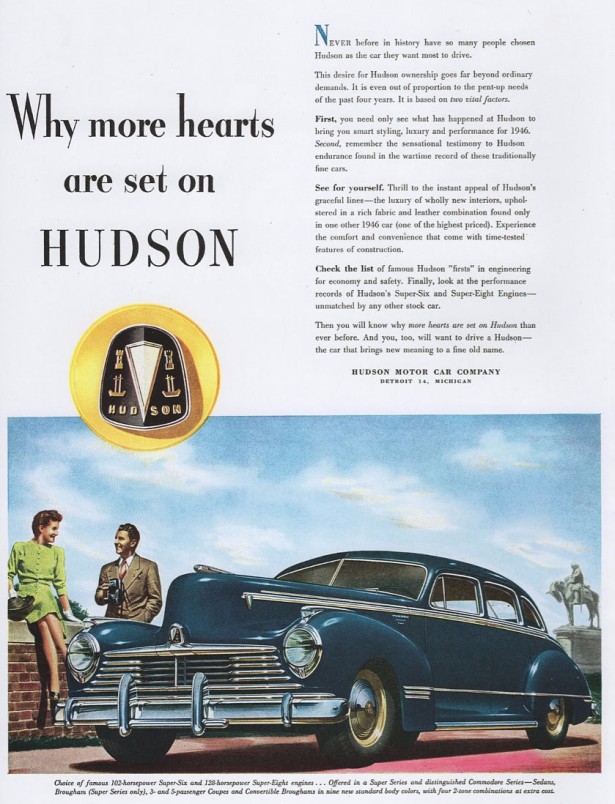 August also saw Packards on parade at Earl C. Anthony’s 1000 S. Hope St. showroom. But Packard was way behind in production too. 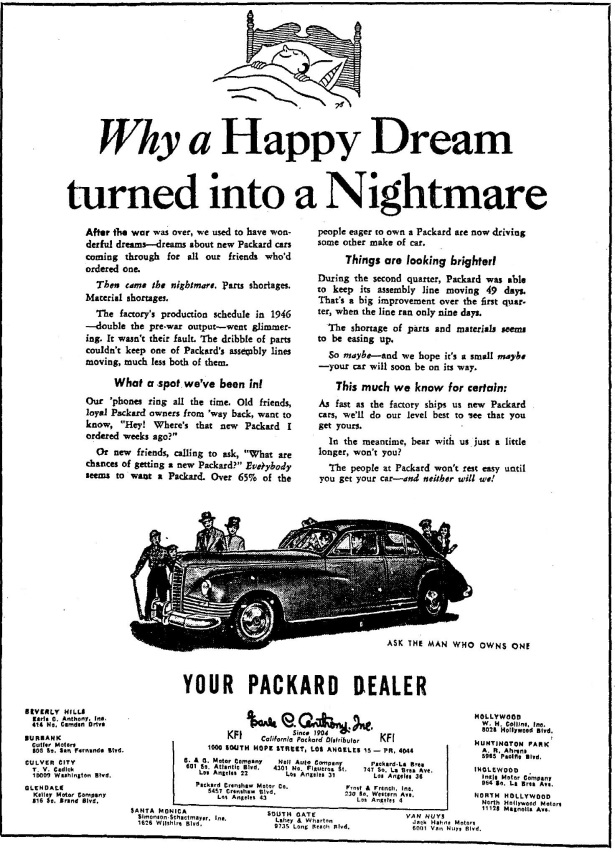 “After the war, we used to have wonderful dreams about new Packard cars coming through for all out friends who’d ordered on. Then came the nightmare. Parts shortages- material shortages.” 8/6/46.

Sure, we could’ve built your new car, but we needed the parts for our prewar Packard customer’s cars. Packard Clipper ad, 1946.

Having exhibited its new line back in November, Buick explained the delay this way: “If you’re inclined to fret because the good news that hasn’t come that your Buick’s ready, just remember this: the best is never easy to get. And top-notch goods always pull the biggest buy-lines. So it isn’t just parts and material shortages that keep our waiting list long, though they have plenty to do with it, it is also the plain fact that Buick stands today as the most wanted car in America.” 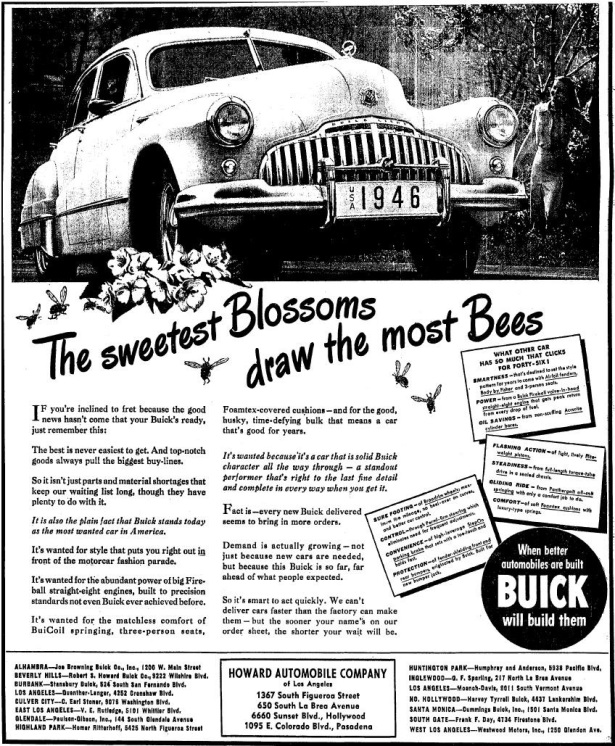 The following month, Oldsmobile appealed to its impatient customers: “We know how anxious you are to get your new Oldsmobile. And there’s nothing we’d like better to do, right now, than to say to every Oldsmobile buyer, “Your car is here. Come get it!” But frankly, it just isn’t possible to do that. There still aren’t enough new Oldsmobiles to go around. Due to shortages in materials and unavoidable limitations on production output of new cars is still behind schedule.” 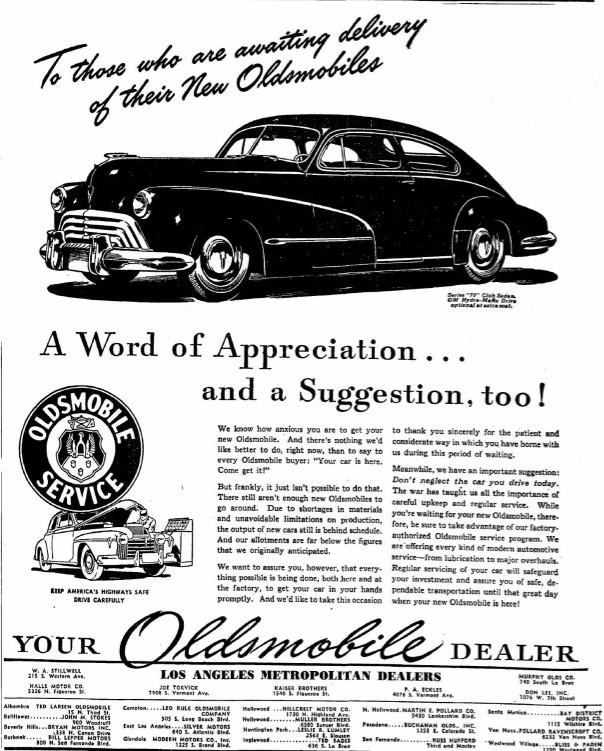 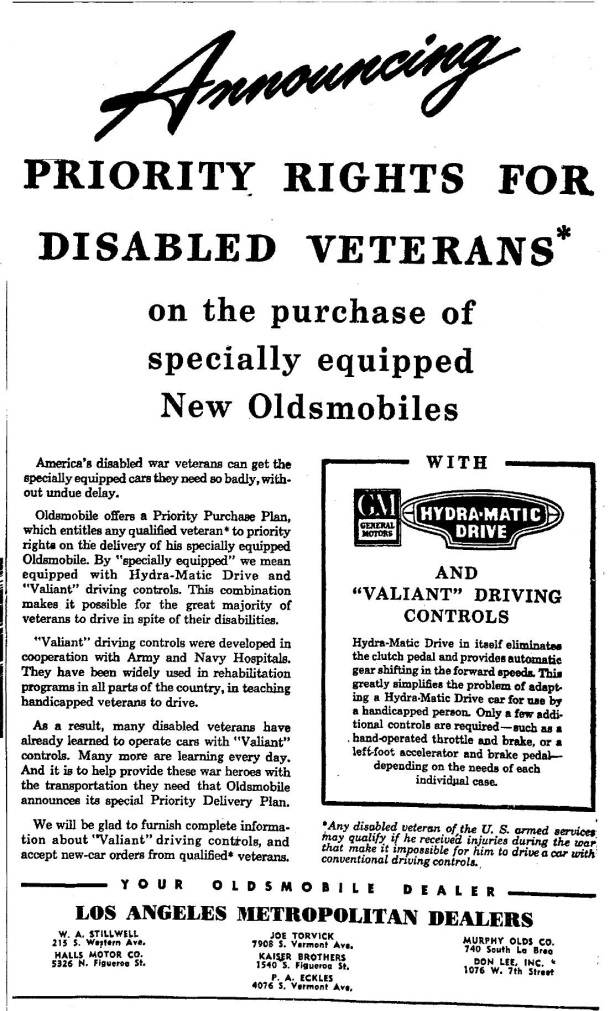 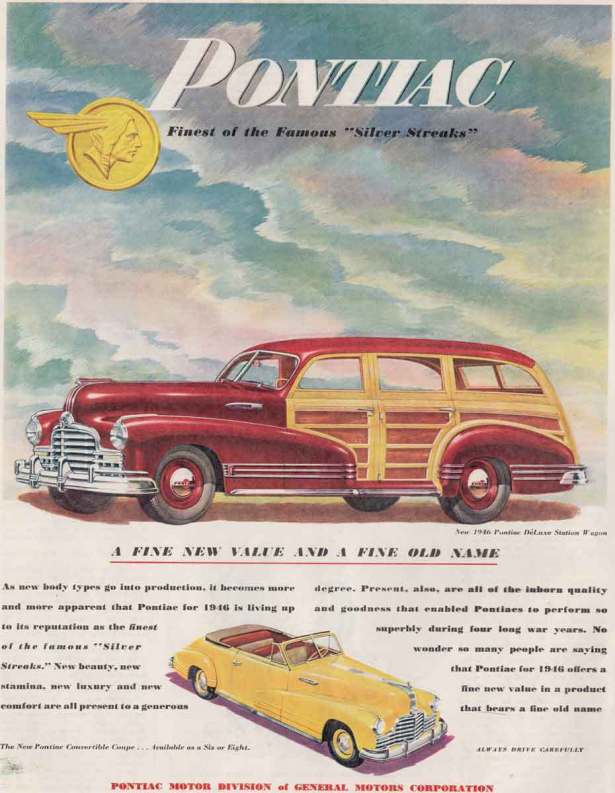 Cadillac took a more aggressive a “you’ll wait and like it” approach.

“Your Cadillac will reach you just as soon as it can be produced- to Cadillac standards.” 10/8/46.

Studebaker production at Vernon resumed, and on October 18, 1946, the first car since January 19, 1942 rolled off its assembly line. The following month, the company announced the Los Angeles showing of its 1947 Commander models, the “world’s newest postwar luxury car.” 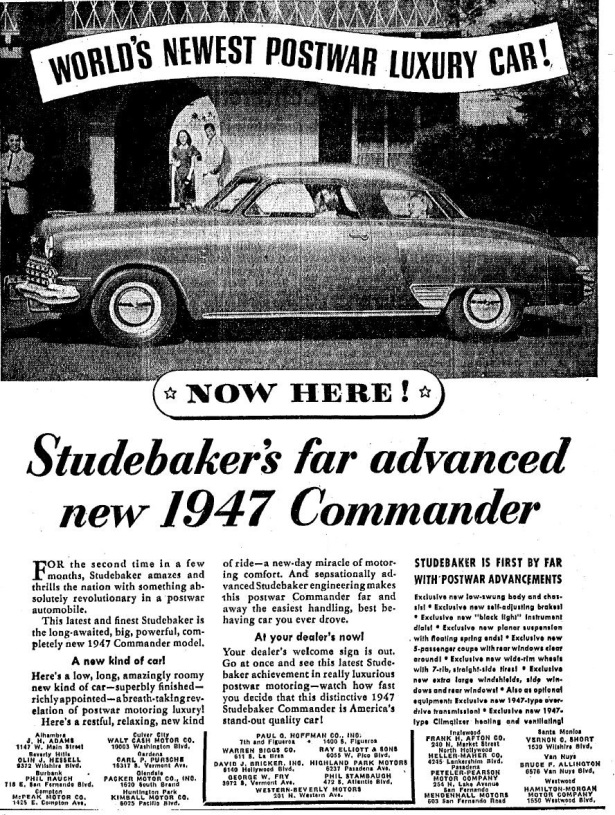 “A Postwar thrill in style and handling ease….” The 1947 Studebaker Commander.

In November Chevrolet put it bluntly: “There simply are not enough new Chevrolets to go around.” 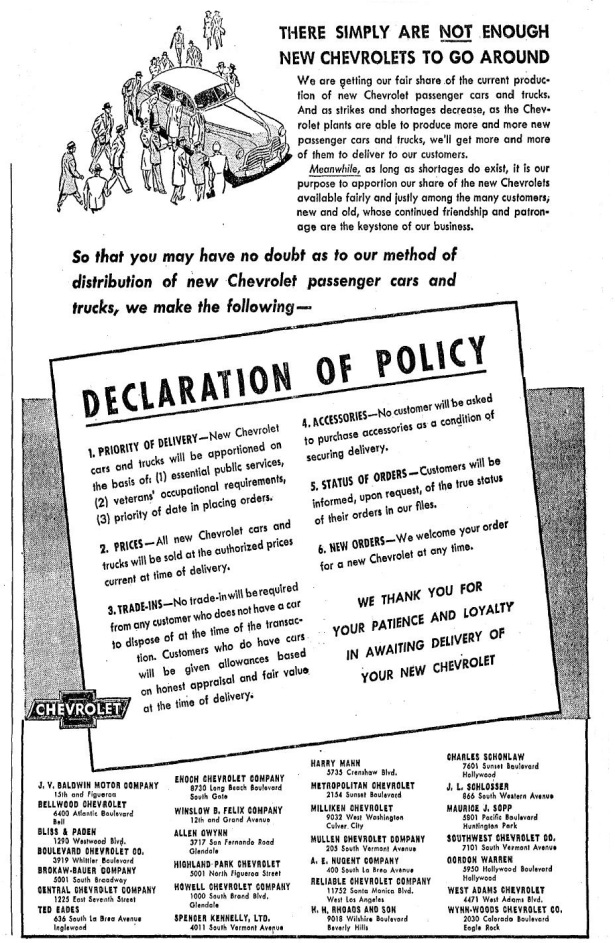 “Look at American in a new Chevrolet,” 1946. Three years later someone realized “USA” actually rhymes with the name of the car and wrote a song about it.

Eventually, finally, the backlog was cleared and enough cars were produced to satisfy even Los Angeles’ demand. The California Motor Vehicle department reported in December that registrations were coming in at an unprecedented rate, caused it believed by the “pent-up buying of new automobiles and the repeated resale of used cars.”