The film adaptation of Raymond Chandler’s debut 1939 novel, The Big Sleep, began filming in October 1944 but didn’t begin its run in Los Angeles area theaters until almost two years later, in September 1946. The usual explanation for delay is that World War II was ending soon so the studio held it back in order to rush its war-related films into theaters, and in the interim Lauren Bacall’s bad reviews for Confidential Agent led Warners to reshoot some of her scenes. A closer look at the timeline:

10-10-1944 The Big Sleep begins filming. Longtime LA Times arts critic Edwin Schallart reports this, along with the fact that Lauren Bacall has been cast for it, and that To Have and Have Not was previewed for the local press “a few nights ago.”

10-18-1944 Columnist Norbert Lusk reports To Have and Have Not previewed for NYC critics.

12-04-1944 Hedda Hopper reports Bogarts have definitely split up and Mayo has retained a lawyer. 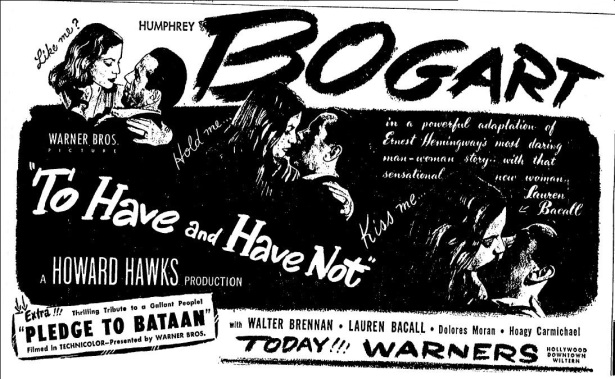 02-19-1945 Schallert reports that Bogart will co-star with Parker in Confidential Agent.

March 1945 Big Sleep edited and ready for release. But it isn’t.

03-06-1946 Hedda Hopper notes that Dorothy Malone “gave Lauren Bacall quite a run for her money in The Big Sleep.”

03-13-1945 Scallert reports Lady in the Lake purchased by MGM and Chandler will work on the screenplay. Speculates that Robert Montgomery will play Marlowe.

03-22-1945 Schallert reaffirms Bogart-Parker pairing for Confidential Agent, notes Warners is heralding the pairing of these two.

04-01-1945 R.K.O’s Murder My Sweet premieres in Los Angeles with Dick Powell playing Marlowe, the first to play the character on screen.

04-30-1945 Schallert reports that Charles Boyer will star in Confidential Agent rather than Bogart, and while Elinor Parker was previously mentioned for female lead, other actresses will be tested in light of the new male lead. Notes too that Bogie is to star in The Two Mrs. Carrolls.

05-01-1945 Schallert reports Fred MacMurray slated to play Marlowe in Fox’s The High Window and Spencer Tracy has been mentioned for the role in MGM’s Lady in the Lake.

08-21-1945 Schallert reports Bogart and Bacall to star together in Tomorrow Is Another Day, directed by Raoul Walsh.

10-04-1945 Schallert reports Bogart and Bacall to start production on The Devil Was a Lady, directed by Raoul Walsh, in “a month or two.”

11-09-1945 Confidential Agent opens in L.A. theaters. Times reviewer Philip K. Scheuer says of Bacall’s performance: “one discovers that she is not really much of an actress,” but adds “(this could be remedied),” and concludes she’s “sufficiently provocative in her sullenness to fasten one’s curiosity up on her next move.”

Advertising for Confidential Agent plays off Bacall’s famous “You know how to whistle, don’t you Steve?” scene in To Have and Have Not.

11-16-1945 Amidst stinkeroo notices for Confidential Agent, Bacall’s agent Charles Feldman writes to Jack Warner urging him to reshoot parts of Big Sleep to highlight Bacall and salvage her career.

12-14-1945 A re-release of It All Came True, Bogart-Ann Sheridan film from 1940, on a double bill with a 1942 Van Johnson B crime drama, retitled Born for Trouble (originally Murder in the Big House) opens in Los Angeles Warner Brothers theaters.

01-16-1946 Hedda Hopper clarifies Howard Hawks doing “added scenes” for The Big Sleep, not “retakes.” True, but there were some retakes, too.

02-21-1946 Erskine Johnson reports in his syndicated “In Hollywood” column that in a scene for Big Sleep, Regis Toomey (Bernie Ohls) had to kiss Lauren Bacall on the cheek as he passes her. No such scene appears in the finished film; Toomey’s part is in fact much reduced in the 1946 version.

04-21-1946 Times article about Dorothy Malone being groomed for stardom by Jack Warner says she had some very “neat and amusing scenes” (plural) with Bogart in The Big Sleep and though “spinsterish” at the outset, “proved her good looks when they went gaily nightclubbing” in the film. Malone’s only scene in the finished film takes place in the bookstore.

06-07-1946 Schallert reports Lizabeth Scott cast opposite Bogart in Dead Reckoning for Columbia. Notes Scott has been compared to Bacall, and says Bogart objected to having Bacall cast in the film as she wanted to “attain her independent cinema destiny.”

08-30-1946 Two Guys From Milwaukee opens in Los Angeles. Lauren Bacall features into the plot and has an uncredited cameo, as does Bogart.

“Hold it, Bogey! You’re on next!!” In L.A. The Big Sleep succeeded the held-over comedy Two Guys from Milwaukee, in which Bogart & Bacall have cameo roles.

The Big Sleep, “the new Warner sensation,” was not so new when it finally arrived in LA theaters on 9/18/1946.

In March 1945, Warners could only wait and hope along with the rest of the world, that World War II would end soon; the studio may have thought the forecast bright enough to begin releasing its war-themed pictures before they became old news.

But a look at Warner’s output for the remainder of 1945 reveals that only half had a war-themed or war-related plot.

In December 1945 at the height of the holiday movie-going season, Warner’s even re-released an older Bogart film, It All Came True from 1940, and a technicolor western, San Antonio, rather than showing The Big Sleep. Confidential Agent had debuted the month before and the studio had already decided to make some changes to it.

Dates are when released in Los Angeles theaters

April 20 The Horn Blows At Midnight (not war themed)

July 13 The Corn is Green (historical; not war themed)

So if the studio wasn’t limiting its released to only war themed pictures, why didn’t it bring out The Big Sleep in March 1945? Warners could have been the first to depict the Marlowe character on screen. Instead, that distinction went to R.K.O. when Murder My Sweet opened locally on April 1, 1945. There were contemporary reports of at least two more Marlowe projects in the works, at Fox and MGM.

It was nothing to do with Bacall’s notices for Confidential Agent in March 1945, as the film hadn’t even been made yet, nor was Bacall then being considered for it. The project was pegged as an Elinor Parker-Bogart vehicle in newspaper reports of February and March 1945. In April it was announced that Boyer was to play the lead male role, and that other actresses were being tested for the female lead. In May it was reported that the film would team Boyer and Bacall.

Bacall’s performance in the film, which debuted in L.A. on November 9, 1945, underwhelmed critics. Jack Warner subsequently received a plea from Bacall’s agent Charles Feldman to rework some of her scenes in The Big Sleep. The work got underway in January 1946.

Then the film sat around again, not appearing in Los Angeles theaters until September 1946. Meanwhile, other studios were scoring hits with mystery-thrillers like Gilda, The Blue Dahlia, The Postman Always Rings Twice, The Dark Corner, and Black Angel. It can’t be said that the studio was prioritizing a backlog of war-related pictures: of its 13 new releases between January and The Big Sleep’s debut, only three had any kind of war-related premise or plot point. In addition, in June Warners reissued two of its older films on a double bill, No Time For Comedy and City of Conquest, from 1940.

Dates are when released in Los Angeles theaters

January 8 Danger Signal (war-related plot point; plays not at Warner theaters but as a second feature to Universal’s Frontier Gal)

June 12 No Time for Comedy/City of Conquest (reissued from 1940, not war themed)

It’s a mystery to me.