The Hotel El Rancho Vegas opened on April 3, 1941. It was the first resort casino-hotel on the strip.

In modern times its significance has been downplayed, coincident with the rise of the Bugsy Siegel cult, which, in order to make the building of the 1946 Flamingo Hotel- contrary to the Bugsy myth, it wasn’t the first, or even the second Strip hotel, nor was it particularly ‘visionary’- into something more than it really was, dismisses El Rancho Vegas as a sawdust on the floor motel court with a western theme, lacking in the Hollywood glitz Bugsy brought to the scene.

If anyone was a visionary here, it was not Bugsy Siegel, but Thomas “Tommy” Hull, an experienced hotel man (at the time he operated the Hollywood Roosevelt Hotel and the Miramar Hotel in Santa Monica) who built the El Rancho on a nearly bare stretch of desert along Highway 91- the Los Angeles Highway- just outside the Las Vegas city limits.

Construction got underway in December 1940. Architect Wayne McAllister modeled El Rancho Vegas along the lines of one of his earliest commissions, Agua Caliente in Mexico, the gambling resort and spa resort he built for Baron Long, Zeke Caress and Los Angeles gamblers in 1928. Like Agua Caliente, the resort in the Nevada desert consisted of long, low, rambling stucco buildings with tile roofs, spread out over 49 acres. McAllister added old California rancho touches as well. The rooms, 240 initially, were set apart, arranged hacienda style around the central restaurant-showroom originally called The Round Up Room, and of course the adjacent casino. Just beyond was an outdoor terrace for dining, dancing and lounging, surrounding the sparkling swimming pool which fronted the highway, a mirage to hot, dusty travelers. Its signature neon windmill, rising above the casino roofline, lit up the empty desert. Hull called it the “Caliente of Nevada.”

El Rancho’s brand of luxurious, romantic western-style Hollywood glamour drew celebrity and society to the gala grand opening on April 3, 1941. Hull didn’t even have to bribe them with free charter plane flights. Yet, locals in cowboy hats and blue jeans didn’t feel unwelcome. Author Wesley Stout, captured something of its appeal in 1942:

“The Rancho somehow has managed to make the riveter, the carpenter and the truck driver at home in overalls in the same room with men and women in smart sport clothes, with an eloping Lana Turner posing for news photographers with her newest groom, with an Ilka Chase yawning at the floorshow, a Sec. Lieut. Burgess Meredith, in a beautifully cut doeskin uniform, idling at the roulette wheel or a John Steinbeck effacing himself in a corner.”

A corner of the bungalow wing

Hoping to help Las Vegas siphon off some of the matrimonial trade from Reno, The El Rancho positioned itself as “the new Gretna Green of the West,” a favorite destination of eloping movie stars.

Postcard view of El Rancho Vegas, “honeymoon haven of the west,” with sunbathers on the lawn between the pool and Highway 91.

A glimpse of the gaming action: slots, roulette, and blackjack.

Diners enjoy a performance in the Round Up Room.

“It’s the Round Up Room for Romance.”

In late 1942, a second hotel opened on the Strip that was not yet a Strip: the Last Frontier, about a mile down the road. Hull decided to pursue a new venture with the Hotel Golden in Reno and put El Rancho Vegas on the market. On March 4, 1943, he told the Las Vegas Review Journal that Bugsy Siegel had made him an offer, which he refused. In July it was announced that the property had been sold to the Hilton Hotel chain, represented by Conrad Hilton and Joseph W. Drown, which then operated the Town House Hotel on Wilshire Boulevard, and the Rosslyn Hotel in Los Angeles and the former Breakers Hotel in Long Beach. The El Rancho didn’t become a Hilton hotel, however; rather, in June 1944 it was taken over by local operators Wilbur Clark, hotel man Clayton V. Smith and Jack Walsh, a onetime operator of the Nevada Biltmore. 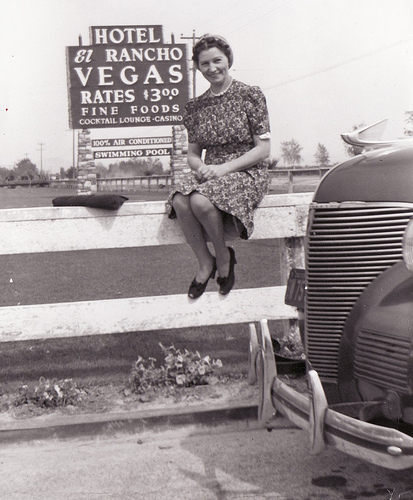 The author’s grandmother at El Rancho Vegas during World War II. Her ex-husband worked there.

The next few years were marked by a succession of owners/leasees and lawsuits.

In March 1945, the wartime Office of Price Administation (OPA) cited Clark for overcharges in violation of OPApricecap regulations- 983 instance in all between July 2, 1944 and September 17, 1944.

With the case still pending, in July 1945, Clark sold a controlling interest in the property to Los Angeles restauranteur Walter Guzzardi for a reported $1.5 million. Guzzardi leased the running of the casino back over to Clark, with Clark agreeing to give Guzzardi a 10% cut in lieu of rent.

Only a few months later, in November 1945, the El Rancho was plunged into receivership as Clark filed a complaint against Guzzardi for “missappropriation of finds and no accounting of funds.” Guzzardi petitioned to dismiss the case but Judge George Marshall, refused. In February 1946, Clark himself quietly dropped the suit, but the financial damage to Guzzardi had already been done.

The deal reeked to the rafters.

In March 1946, it was reported that Drown had leased the El Rancho to San Diego hotel man Sanford “Sandy” Adler, who headed up a “local syndicate of several corporate investors.” 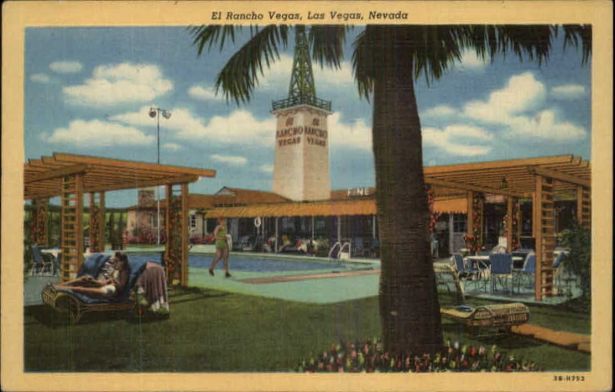 Meanwhile Clark and Guzzardi’s legal battle continued. In September 1946, Guzzardi sued Clark for damages of $1,455,000, his loss in the deal, charging that Clark had conspired with his pal Judge Marshall to defraud them of their El Rancho investment, that Clark filed the bankrupsy suit in Marshall’s court, knowing that Marshall would put El Rancho in receevership, which would require the mortgage to be paid off immediately. Clark was supposed to pay Guzzardi 10% of the casino profit but hadn’t, forcing Guzzardi to default on payments to Drown. Clark filed a $1,500,000 countersuit.

At the end of 1946, a third casino-resort opened at the far end of the Strip: The Flamingo, operated by Bugsy Siegel. Reputed to have cost $5 million, the glitzy casino had its gala grand opening over Christmas weekend. But, as the hotel portion of the resort had not yet opened, El Rancho Vegas would benefit from the overflow.

Not to be outdone, El Rancho booked headliners for the Round Up Room that weeked: The Ritz Brothers comedy team (who had been packing them in at Hollywood nightclubs like The Florentine Club), vocalist Peggy Lee, and others. Columnist Bob Thomas duly reported that the dining room and the casino were both packed. 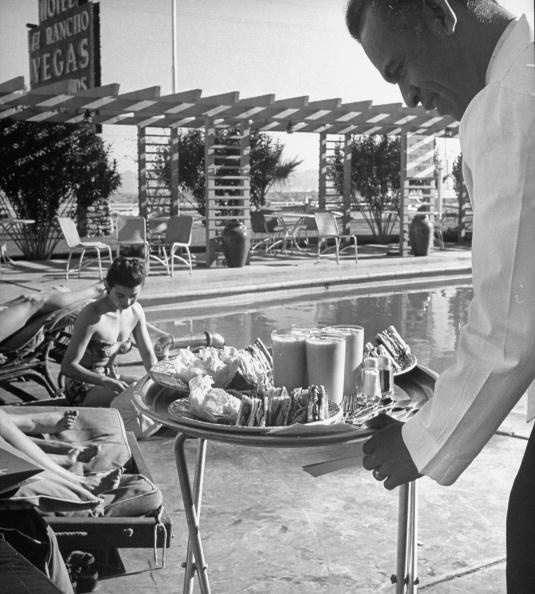 Siegel was shot to death in Beverly Hills on June 20, 1947. Barely a month later, in July 1947, it was reported that Sandy Adler of El Rancho Vegas had negotiated to buy the Flamingo.

Appealing to the LA crowd, which still accounted for most of Las Vegas’ tourist business: for $20 one could fly in on a DC-3, enjoy a floor show and Thanksgiving dinner at either of Sandy Adler’s Las Vegas hotels- El Rancho Vegas’ Chuck Wagon Buffet or The Flamingo’s Tally-Ho Buffet- and fly home again. 11-11-1947.

An overview of the El Rancho property before the Thunderbird (or anything else) went up across the street.

Round-Up Room showgirls play cards under the El Rancho sign after a rare snowstorm of January 1949. Some wag has changed the Las Vegas slogan, “FUN IN THE SUN” to read “SUN-OW” (author’s collection).

In April 1950, a fifth resort hotel opened on the Strip with a familiar name: Wilbur Clark’s Desert Inn, conceived and run by El Rancho’s own former manager. There’s a story, maybe true, maybe apocryphal, that Jake Katelman broke the house at Desert Inn on opening night, forcing Clark to turn to the mob for cash to keep it afloat. In any case, Jake was killed in a car accident in June 1950. His nephew, Belden Katelman, later took over a controlling stake in the El Rancho.

Though still popular and glamorous, the resort faced greater competition as the decade progressed, and the Strip began to turn away from Western themes to more exotic locales. The Sands and The Sahara opened in 1952, followed by the Riviera, the Royal Nevada and the Dunes in 1955. Belden Katelman and Guy McAfee bought the 1942 Last Frontier, rebuilt it with a futuristic theme and reopened it as The New Frontier. Former bootlegger Tony Cornero was building The Stardust down the street, set to eclipse them all. A fire in 1955 resulted in an extensive remodeling of the casino and the restaurant-showroom, which was expanded and renamed the Opera House, and a covered carport entrance was added off the lobby. 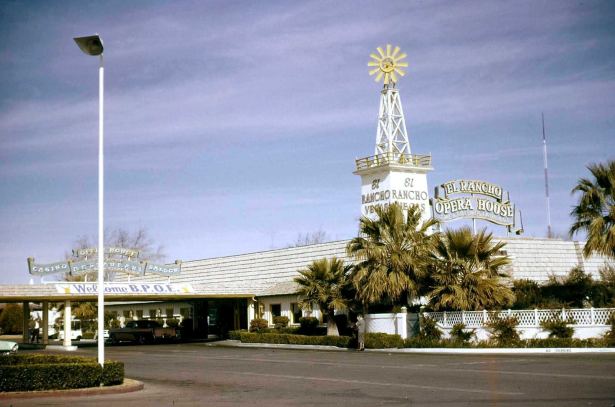 Then, in a flash, it was gone: another fire, most likely arson, on June 17, 1960, destroyed the casino, theater and restaurant. Katelman said he planned to rebuild, but never did.

The residential part of the complex, which was untouched, continued to operate as a motel until Howard Hughes bought the property as part of his Las Vegas buying spree in the late 1960s-early 1970s. At last sighting, it was still vacant.

In the 1980s, a casino called the El Rancho opened in the old Thunderbird property- no relation to the original.

The Desert Inn was reportedly Clark’s in name only. He ran into trouble and had to sell a majority interest to complete it. Moe Dalitz and other gangsters were the real owners.