Martin “Marty” Fiedler, the “Zeigfeld of softball” operated Fielder’s Field ballpark, located at the southeast corner of Sunset Bouevard and El Centro Avenue (addressed as 6134 Sunset Boulevard) from 1935 to 1938.

Born in Baltmore in 1898, Fiedler was a former baseball player and manager. In late 1934, he leased an existing ramshackle ball park at Sunset and El Centro. The lot, from the southwest corner of Sunset and Gower, as 6100-6136 Sunset, had once been the studios of the Universal Film Manufacturing Company (later Universal Pictures) and several other subsidiaries and smaller studios thereafter. It was gutted by fire in August 1926. 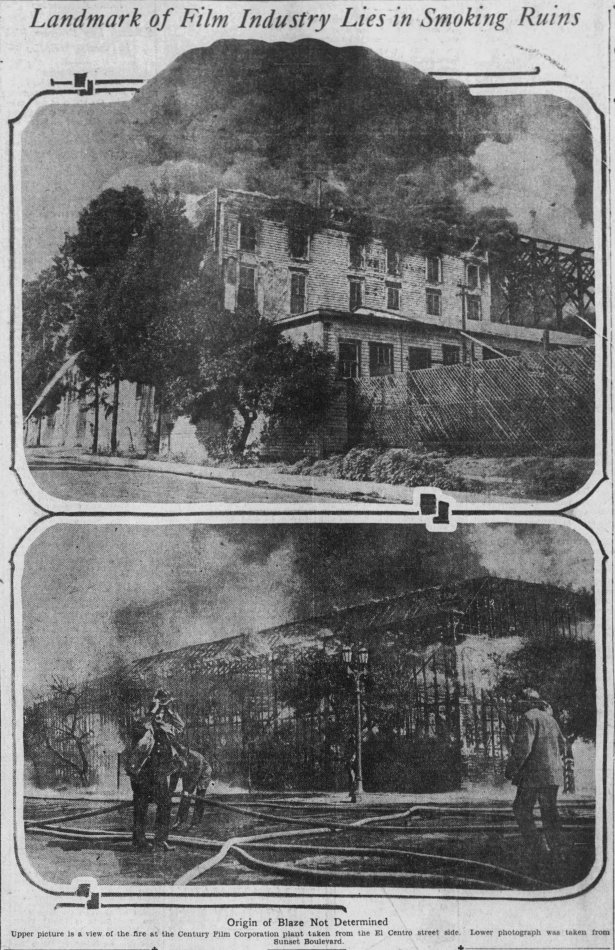 Before Fiedler came along, the lot remained largely vacant except for a cafe, built in 1927 at the southwest corner of Sunset and Gower, addressed as 6100 Sunset Boulevard. The unnamed baseball field at the opposite corner was active by 1934.

In January 1935, Joe Fiedler, brother of Marty, applied for permits to build baseball stand bleachers at 6134 Sunset. More were added in March.

On the evening of April 1, 19935, Klieg lights cut through the Hollywood night sky, marking the grand opening of Fiedler’s Field. It was a double header of mens’ softball teams Dave’s Delicatessen vs. Looney Tunes and the Clover Club team vs. Ben Hur Coffee. Only about 270 people showed up.

Between the players’ athletic prowess and Fiedler’s Sid Grauman-like promotional stunts and general ballyhoo, womens’ softball games at Fiedler’s Field became the latest Hollywood fad, their popularity compared to that of the miniature golf craze of 1930. All the major film studios had teams.

By June 1935, attendance at Fiedler’s Field was up to 1100 fans. Games were held nightly. Admission was 10 cents. Fielder added restrooms in July, and additional bleachers in August, when a record 2400 fans jammed in. In all, according to Fiedler, 150,000 people attended games at the venue in 1935. That number increased to over 200,000 in 1936. Fielder said that fans enjoyed the intimacy of the park, which was small enough that even fans in the last row of bleachers had a ringside seat.

A glimpse of the Sunset Boulevard side of Fiedler’s Field before CBS’ studio went up across the street.

View of Fiedler’s Field c. 1938 after the construction of CBS studio. The cafe on the southwest corner of Gower at 6100 Sunset was Jack White’s when Fiedler’s Field first opened. It became Chappell’s in 1936. After Chappell’s closed in 1940 it was vacant for a time. It later became The Copper Skillet restaurant and was demolished in 1976. 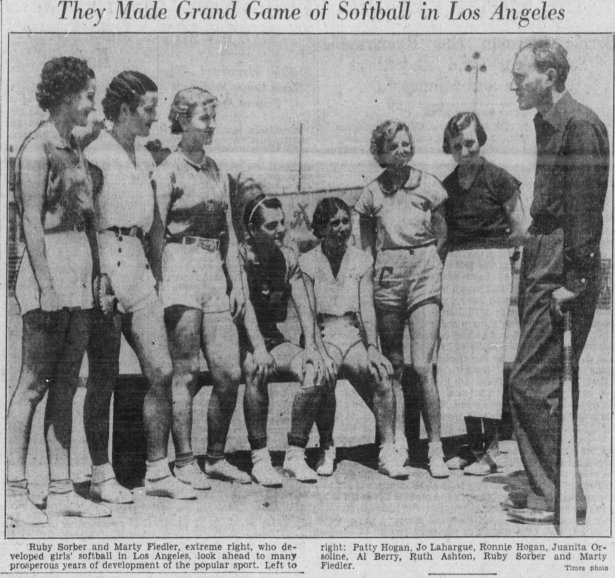 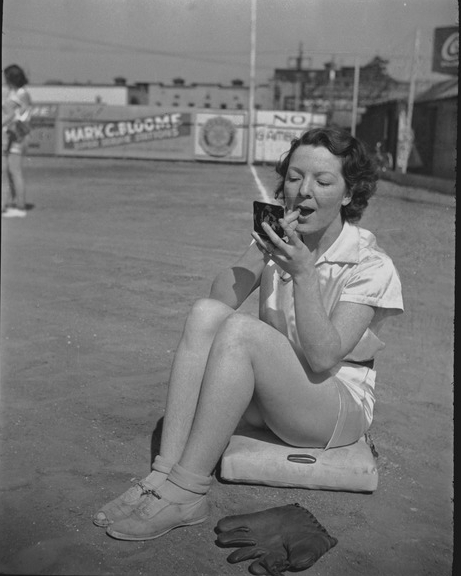 Bernice Maxon, who played second base for the Coca-Cola womens’ softball team at Fiedler’s Field in 1936. Sponsor Mark C. Bloome’ tire store was a neighbor, on the other corner of El Centro at 6210 Sunset Blvd. UCLA digital.

In February 1937, Fiedler announced he was opening a second $15,000 softball park on Fairfax Avenue and Fourth Street. Modeled after the Sunset Boulevard park but with more seating (it could hold 5000), the gala opening was held on April 5 1937.

Thereafter, the original park was often referred to in newspapers as Fiedler’s Sunset Field (not to be confused with Sunset Fields golf links) to distinguish it from his Fairfax Field.

Lois Terry, the “Babe Ruth of girls’ softball,” pictured here in 1936, was often seen pitching at Fiedler’s Field in 1938. LAPL.

After the 1938 season ended, in September 1938, Fiedler took some of the womens’ teams on a three month tour of Japan, the Phillippines and Hawaii. Fiedler never saw the promised cash promised for the tour. In the resulting financial fallout, Fiedler’s Sunset Field did not reopen for the 1939 season. The parcel between Gower and El Centro, excluding the restaurant space, was used for parking.

An August 1940 photo of the Sunset & El Centro intersection during construction of the Hollywood Palladium at 6215 Sunset shows a surface parking lot where Fiedler Field had been. 8/25/1940. LAT.

In 1976, the L-shaped, western-themed Gower Gulch shopping center, anchored by a Thrifty Drug store, was built on the site. A new restaurant was also built at the southwest corner of Gower and Sunset that housed an Alphie’s and later a Denny’s.

While the Sunset and El Centro location was no more, Marty Fieldler continued to operate his softball field at Fourth and Fairfax for the 1939 and 1940 seasons. As of September 1940, it was also referred to as Fiedler’s Fairfax Stadium.

On April 1, 1941, Fieldler announced that he was moving his field from the Fairfax location to a new spot at La Cienega and Beverly Blvd near Third Street. The new softball park, once again called Fiedler’s Field, held its first game of the season on April 20, 1941.

Partway through the season, on July 1, 1941, the new Fiedler Field La Cienega closed. Two weeks later, on July 13, 1941, remodeled, redecorated, and, as it turned out, renamed, it reopened as “Beverly Stadium” with Ruby Sorber as general manager.

Marty Fiedler joined the Navy after Pearl Harbor and in 1942 was directing sports activities at the US Naval Training Station in San Diego, helping organize the base’s baseball team, among other duties. After the war, in 1947, again teamed with Ruby Sorber as well as Griffith Park club concessioner Wilson Atkins, he announced that he was building a new softball park to be called Fiedler’s Field, in Burbank near Lockheed, addressed as 2235 N. Hollywood Way. It opened on June 11, 1948 as Fiedler’s Field. Later that summer, the name was changed to Atkins Park and, in 1952, to Burbank Stadium.

Marty Fiedler died in 1952 while working as a sports director in the Shouth Pacific on a federal defense project. Atkins offered the 5-acre property to the City of Burbank at cost for use as a recreation center, but the deal never went through. In January 1953, Lockheed purchased it and razed the facility.

A man outstanding in his field: Marty Fiedler c. 1948. LAPL