The Blessed Sacrament Catholic Church on the north of Sunset Boulevard near Las Palmas opened in 1928, 5 years after the parish’s parochial school located just to the west, which opened in 1923. Today the school is addressed as 6641 Sunset, the church as 6657. Previously the site had been the home of former police commissioner H.W. Lewis.

Harbert William Lewis came to Los Angeles in 1897 and took up real estate. In February 1904, was appointed to the Police Commission by Mayor Meredith “Pinky” Snyder, during Snyder’s second non-consecutive term. At that time the Mayor was also head of the Police Commission. Owen McAlear succeeded Snyder in December 1904 and Lewis continued in real estate. He brokered several deals for Thomas Higgins, a retired mining man from Arizona. In 1905, Higgins built a 6-story hotel at 115 East Third Street he named the Bisbee Inn. It became a notorious dive, managed by James E. “Chowder Jim” Dunne, with drinking parties and secret passages and elevators that whisked guests to private dining rooms and even more private bedrooms. When citizen complained, the police raided, yet somehow the place was always quiet when authorities arrived. 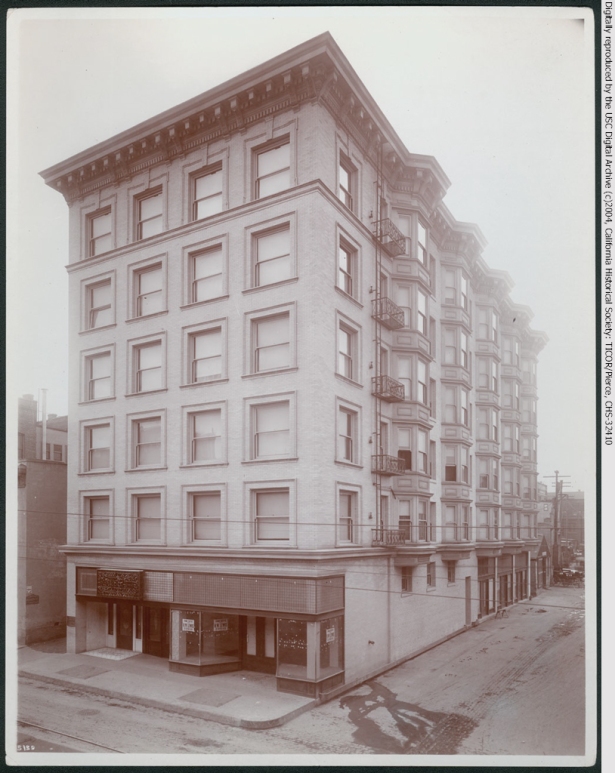 Citizen outrage over the death of a young girl named Minnie Blough in February 1906 at another notorious dive down the steet called the Del Monte Tavern and the apparent attempt by police to over up the circumstances of her death, was too loud to ignore. Both establishments lost their liquor licenses.

Once the outcry died down, however, both were operating again under new names and ostensibly new management. Chowder Jim brought in fronts from San Francisco to run the Bisbee and changed its name to the Manhattan Inn.

On March 22, 1908, Thomas Woolwine was named the City’s new Prosecuting Attorney. I can count on one hand the number of LA City officials I think were trustworthy. Thomas Woolwine is one of them.

Woolwine began hearing rumors of misconduct by city officials with regard to the opertion of the red-light district. In May, with the help of private detectives, he began a secret investigation which ultimately found that Los Angeles was on the brink of becoming an “open town,” with widespread gambling and bookmaking as well as a thriving Tenderloin, and allegations of protected vice that went all the way to the mayor’s office. On August 3, 1908 wrote to Mayor Harper in Harper’s capacity as head of the Police Commission, demanding Harper launch an investigation. Harper told Woolwine to go ahead and investigate him.

D.A. John Fredericks, rather reluctantly, made Woolwine a temporary Assistant to the D.A. The red-light district brothels abruptly closed by order of the police on August 20 but did little to stop the rumprs, especially when Edwin Tobias Earl, owner of the Los Angeles Evening Express, ran stories about the Harper administration’s protection of vice. In October 1908, H.W. Lewis and other city officials sued both Earl and Woolwine for libel.

On October 15, 1908, as Woolwine was about to begin grand jury hearings, Fredericks fired him, ending the official investigation. E.T. Earl, however, continued to conduct his own investigation, seeking evidence in the libel case.

One of the things he exposed, in January 1909, was the fact the H. W. Lewis had been Higgins’ bagman, collecting rents from the Bisbee Inn/Manhattan Hotel from Chowder Jim for Higgins, including while a Police Commissioner. Property owners loved to rent to shady businesses as they could charge exhorborent prices and, when the inevitable expose came, could cling to respectability, claiming to know nothing of what went on in the buildings they owned. What the Express saw at the Manhattan Hotel was too terrible to be printed in a family newspaper. 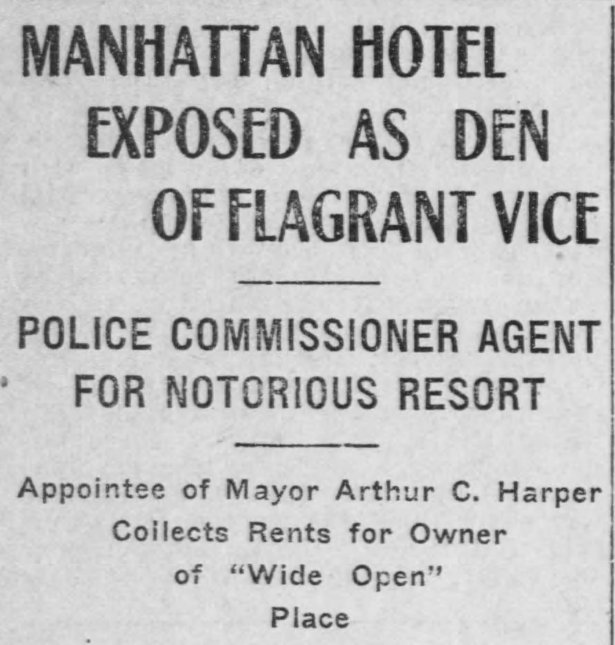 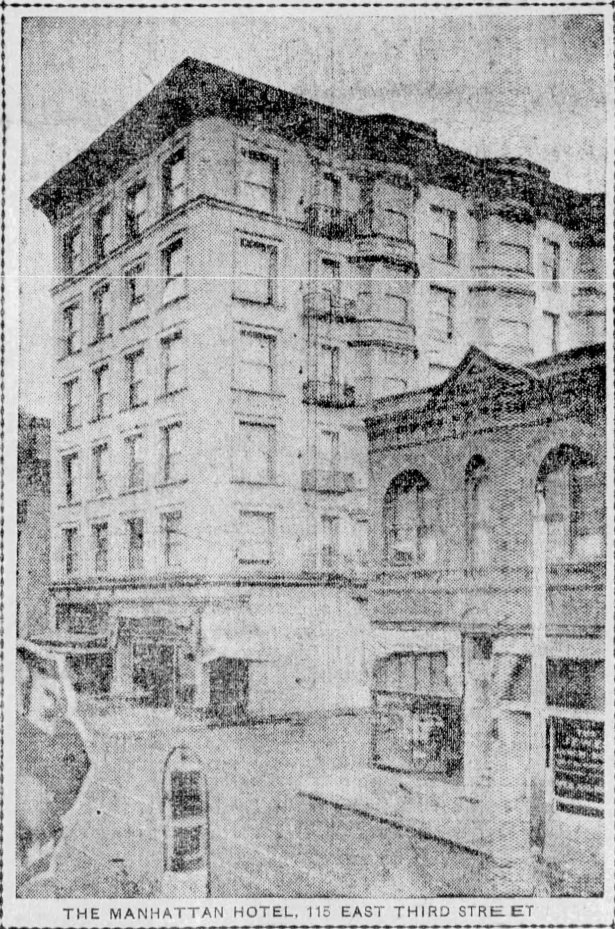 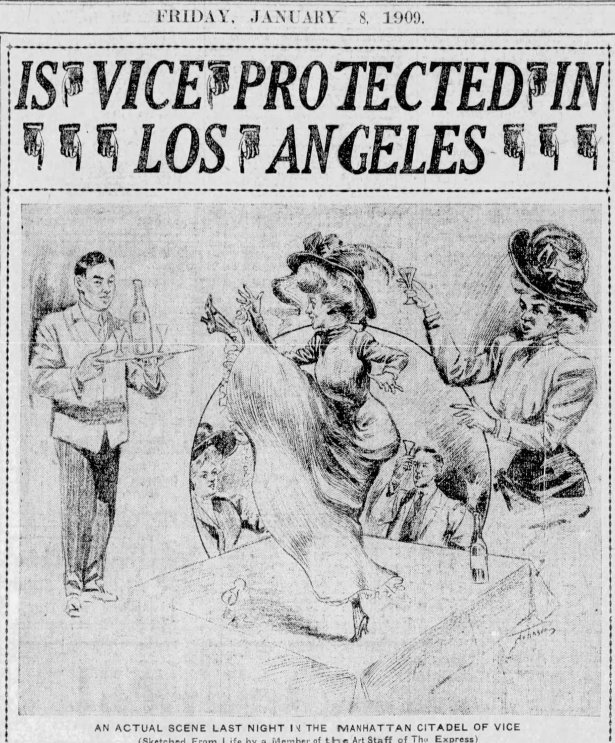 The LA Express’ undercover invetigation into doings at the “citadel of vice,” the Manhattan Hotel and its connection to Police Commissioner H.W. Lewis. 1/8/1909 LA Express.

Foreshadowing the successful ouster of Mayor Shaw in 1938, a recall effort was launched against Mayor Harper, and a special election scheduled for March 26. Harper, with the same gall later exhibited by Frank Shaw, put his own name on the ballot to succeeed himself, should Los Angeles vote to recall him.

The Grand Jury was investigating, however, and concluded in a final report that Harper had committed “offensive acts” both as a private citizen and in his capacity as mayor. Harper abruptly resigned on the evening of March 11, 1909. Lewis tendered his resignation as police commissioner the following month.

After his “retirement,” in 1911, Lewis bought an existing house with extensive gardens on what was then 369 West Sunset Boulevard (later 6657), formerly home to Mrs. William Squires. 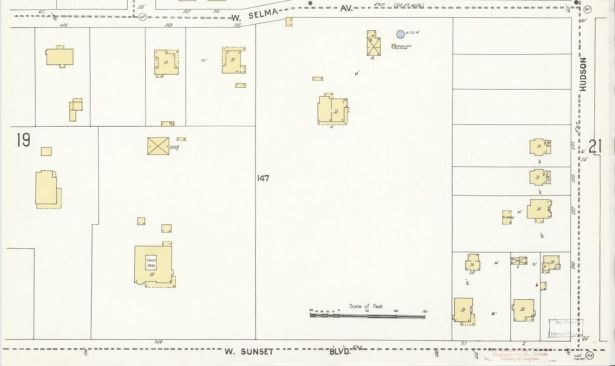 Lewis died here in February 1915 at age 62. His memorial service was held at the residence, the first of many funerals that would be held at this address.

Lewis’ widow continued to live at 6657 Sunset with her son and daughter-in-law. They are listed here in the 1920 federal census.

In November 1920, the Hollywood Daily Citizen reported that the Blessed Sacrament was planning to build a new school adjacent to its present church at the southeast corner of Hollywood Boulevard and Cherokee Avenue. The church had been at this corner, originally Prosepect Avenue and Eulalie Street, since 1904.

Interior of the Church of the Blessed Sacrament at Hollywood and Cherokee. LAPL.

By the Spring of 1921, however, the parish had acquired 6657 Sunset Boulevard and put the Hollywood Boulevard property on the market. In August 1921, The Hollywood Daily Citizen  reported that architect Thomas Franklin Powers was drawing up plans for a new Blessed Sacrament complex on the Sunset property, to consist of a 2-story, 12 room school building, a convent to house 16 sisters, a rectory, an auditorium to seat 800, and a church to accomodate 1200. 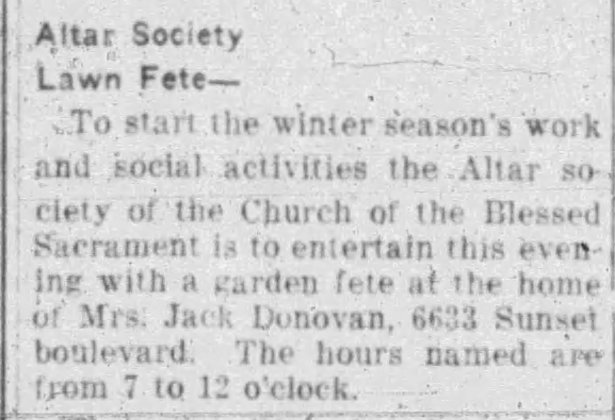 The Alter Society of the Church of the Blessed Sacrament held a garden fete at the home of the parish’s future neighbors Jeanette Donovan and her son Jack next door at 6633 Sunset. 10/12/1921 Hollywood Daily Citizen.

Speculation ran high as to who would buy the Hollywood Boulevard and Cherokee location and what would be built on the site. The sale was announced in October 1922, the $300,000 price said to be a new record for boulevard frontage. The church continued to hold services here for another year.

On June 18, 1923, the cornerstone was laid for the new Blessed Sacrament school.

Classes began here in Spetember 1923 although work was still continuing on the structure. 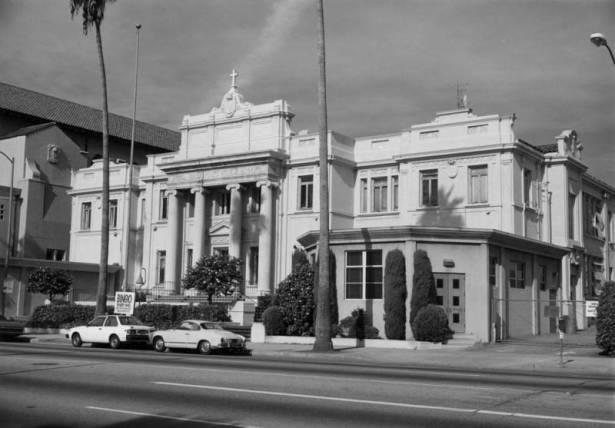 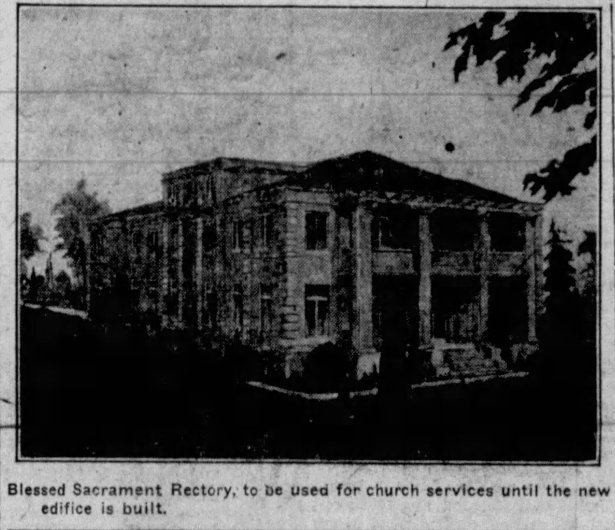 Drawing of the Church of the Blessed Sacrament Rectory. 9/22/1923. Hollywood Daily Citizen.

On October 28, 1923, the church held its last services in the old building on Hollywood Boulevard and thereafter operated in temporary quarters at Sunset. 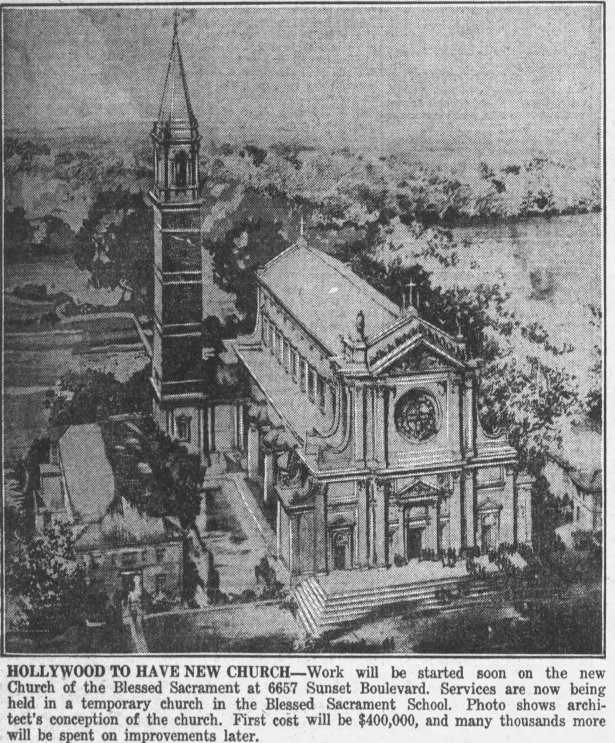 The cornerstone of the new church building was place March 13, 1927.

The chuch held its dedication on June 3, 1928. The interior would still need work, to be finished over time. 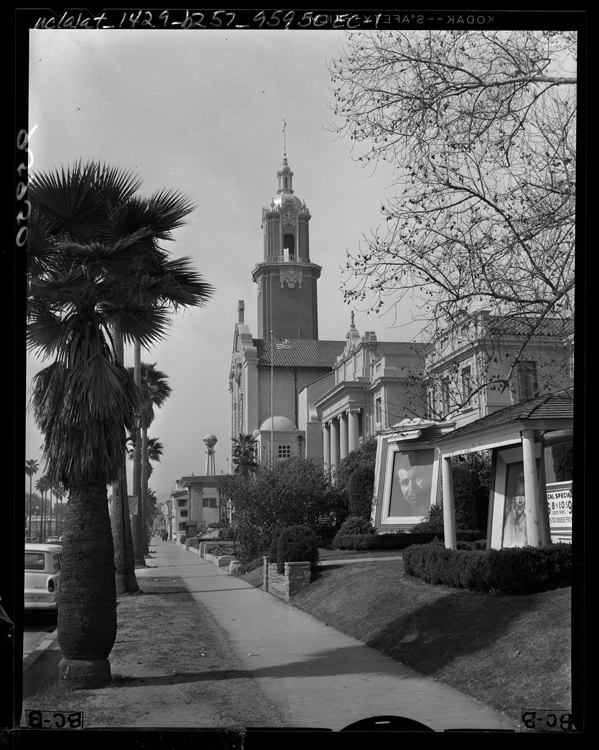 View of the Blessed Sacrament School and Church looking north. 6633 is at the lower right. UCLA digital,

One thought on “6641-6657 Sunset: Blessed Sacrament Church and School”