Depending on when you arrived in Los Angeles in 1926, the main branch of the public library would be found in one of two locations: in rented quarters in the Metropolitan Building at Fifth & Broadway until July, then in the spectacular new library we know today.

The Metropolitan Building on the northwest corner of Fifth & Broadway in in 1926. Designed by Parkinson & Bergstrom in 1913, it housed the library on its 8th and 9th floors from 1914 to July 1926. LAPL collection.

The library in the Metropolitan Building, photographed in June 1926 shortly before it moved into its new home. Photo: LAPL collection.

Early postcard view of the library showing landscaping work along the Grand Ave. and Flower St. boundaries still in progress. It also illustrates the cut made through old “Normal School Hill” to open Fifth Street to traffic to the west.

The new central branch was designed by New York architect Bertram Goodhue in a Spanish-Colonial/Moderne style. It took up two city blocks, bounded by Grand Ave, and Hope, Fifth and Flower streets, on a property originally occupied by the 1882 Los Angeles State Normal School. Work was still being completed on its art work and bas relief sculpture when it opened to the public in July 1926.

The Newspaper Reference Desk, 1926. People are reading bound volumes of newspapers, which is how they were preserved prior to the development of microfilm. Photo: LAPL collection. 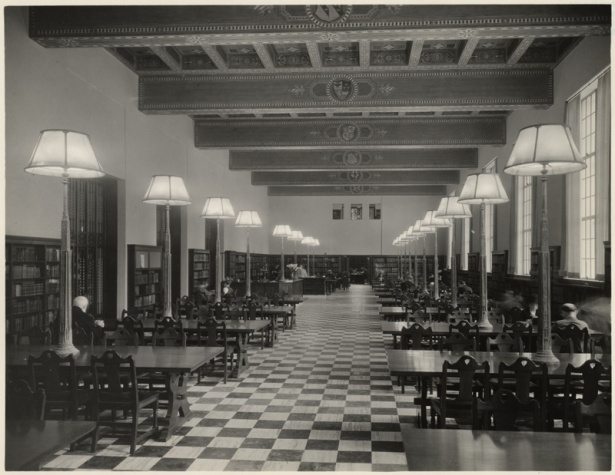 One thought on “The Public Library”