Harold “Red” Grange was a college football player, an all-American halfback who rose to national prominence after his remarkable performance in a 1924 game against Michigan. In 1925 he turned professional, signing on with the Chicago Bears. He kicked off 1926 with a football game at the Memorial Coliseum playing against the Los Angeles Tigers, then returned in the spring to star in his first Hollywood feature film.

In December 1925 came the exciting news that the National Professional Football League’s Chicago Bears with Red Grange would culminate their cross-country tour in Los Angeles. Who the Bears would be taking on became clear on January 7, 1926 when it was announced that George Wilson would captain P.H. “Puss” Halbriter’s hastily assembled team of college all-stars, the Los Angeles Tigers.

Like Red, George was an all-American halfback and a college grid star. Only days before, Los Angeles had seen him playing for the Washington Huskies against Alabama at the Rose Bowl in Pasadena.

Los Angeles seemed more excited about seeing Red Grange than having its own football team. Grange and manager Charles “C.C” Pyle arrived in Los Angeles on the morning of January 14. That afternoon, Red and George attended a luncheon held in their honor at the Biltmore Hotel, with musical entertainment provided by the Dixie Blue Blowers of Fred Solomon’s Penny Dance De Luxe dance hall.

The game was originally to be held at the new Wrigley Field baseball park, but ultimately took place at the Memorial Coliseum on January 16, 1926. 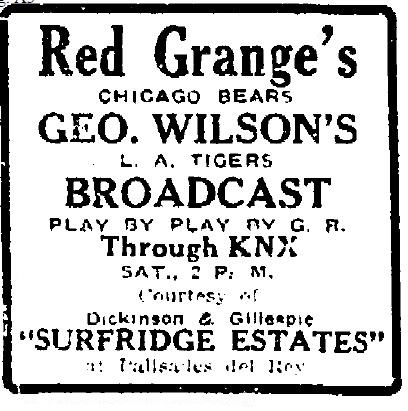 The game was broadcast over local radio station KNX, sponsored by Dickenson & Gillespe’s “Surfridge Estates” in Palisades Del Rey, one of many new beach developments being proposed at the time. 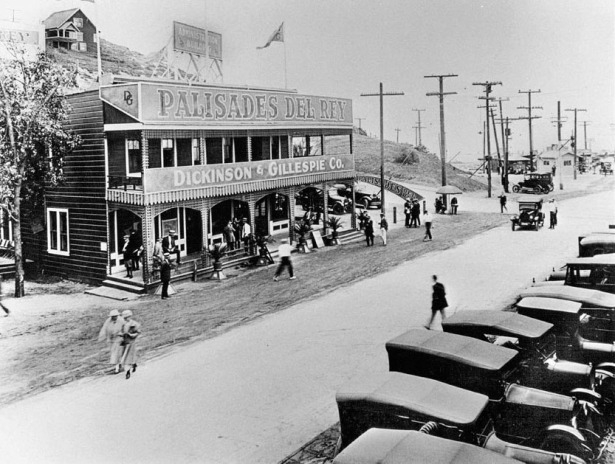 On game day, the Los Angeles weather performed beautifully as advertised, and some 70,000 fans crowded into Memorial Coliseum. It was generally agreed that Wilson outperformed Grange in the game, but the Bears whipped the Tigers 17 to 7.

By early February, Grange and C.C. Pyle were organizing a rival football league after the National Football League denied the pair a football franchise at Yankee Stadium in New York. The league would be called the American Football League and Grange called his team the New York Yankees. George Wilson threw his helmet in with Pyle and Grange, and organized a professional team of his own. 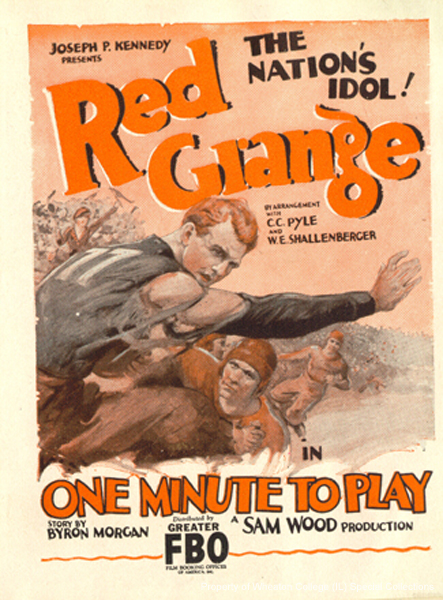 With the new league preparations underway, Grange returned to Los Angeles in May, arriving aboard the California Limited at Le Grande Station, where he was met by a contingent of Hollywood film stars who welcomed the gridder into their ranks: he was going to make his first movie. 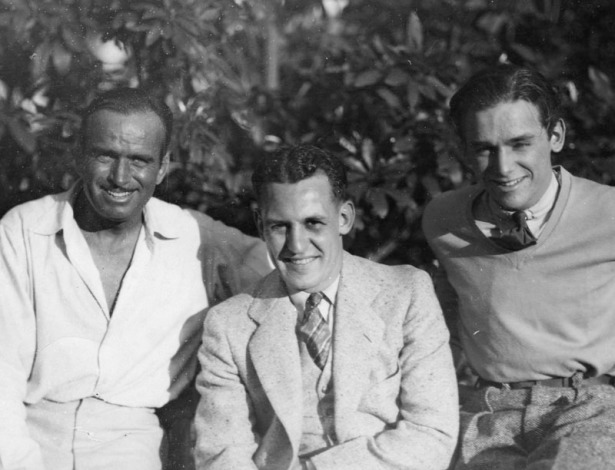 Red (center) in Hollywood with Douglas Fairbanks (left), 1926. In his autobiography, The Red Grange Story (1953), Red tells of being given a suit by Fairbanks, possibly this one, a pastel tweed. LAPL.

Originally titled The Halfback, One Minute to Play was produced by Joseph P. Kennedy’s F.B.O. studio in the summer of 1926. The story revolves around college football player “Red Wade.” George Wilson led the opposing team for the football game sequences, which were shot at Pomona College in Claremont. When not working, Red relaxed at the Ambassador Hotel and mingled easily with the Hollywood film set but didn’t let it go to his head; when shooting wrapped he returned to Wheaton, Ill and resumed his off-season work as an ice delivery man, hence one of his other nicknames, the “Wheaton Ice Man.”

Praise for the film from actress Gloria Swanson (paramour of FBO’s Joseph P. Kennedy at the time), sportswriter Grantland Rice, and Mayor Walker of New York!

One Minute to Play opened in Los Angeles on September 18 at the Million Dollar Theater (where Rudolph Valentino’s final film, Son of the Sheik had premiered in July) to generally favorable reviews. The football sequences were called out particularly for their realism, as opposed to the “hokum” used in most gridiron-themed films.

Los Angeles boys could get an authorized Red Grange football and an autographed picture of Red by securing subscriptions to the Los Angeles Times. 11-14-1926.

In the fall of 1926, C.C. Pyle was orchestrating the US tour of women tennis champions Suzanne Lenglen and Mary K. Brown and Red Grange’s New York Yankees and George Wilson’s Los Angeles Wildcats, more commonly referred to as “Wilson’s Western Wildcats” or just “George Wilson’s team” by the press, faced each other on the field again in a series of road games. In the meantime, Los Angeles had gained another professional football team, the Los Angeles Buccaneers. 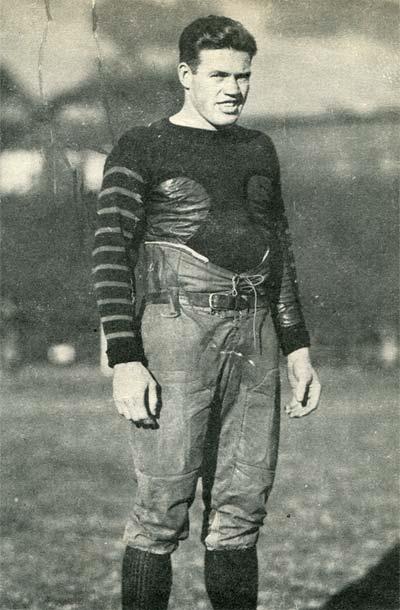 Harold P. “Brick” Miller had been coaching football while attending medical school in L.A. In 1920 he’d been part of Cal’s undefeated “Wonder Team,” was an all-American end, and could still play a good game. He was recruited to captain the new L.A. pro team in August 1926 and they began holding practices out at Palisades Del Ray, near the Surfridge Estates.

In January 1927, the two famous redheads of football met at Los Angeles’ Wrigley Field for the final games of the 1926 season.

The first, held January 16, was an overwhelming victory for the Buccaneers, who trounced the Yankees 30 to 6. Only about 20,000 fans saw the game, however, compared to the 70,000 who had witnessed the Bears-Tigers clash this time last year. The low turn out was blamed on high ticket prices.

Hollywood’s Marion Davies (center), Hobart Henley (right), Eddie Kane, and Bebe Daniels were among the 20,000 who turned out for the clash at Wrigley. LAPL.

The Los Angeles Buccaneers and the New York Yankees met again on January 30 for the final game of the 1926 season. George Wilson, of the Wildcats, had joined the Yankees in the interim, and helped bring them to victory at 14-0. But, although “popular prices” prevailed, with seats going for $1, $2 and $3, only an estimated 10,000 fans saw the game.

The Wildcats and Yankees would play again at Wrigley the following year for the conclusion of the 1927 season, but the “rogue” American Football League was being dissolved. Red continued playing football until retiring from the game in 1934. George Wilson later turned to professional wrestling. Brick Muller went on to practice medicine.