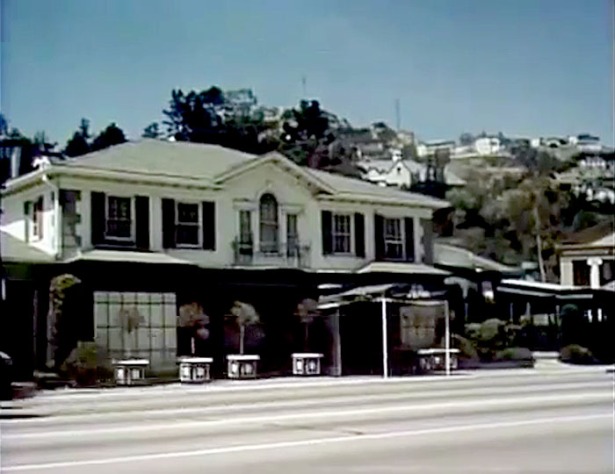 This 2-story colonial-style building housed retail shops such as jeweler-to-the-stars Leykin et Cie and the “Club 86” cocktail lounge before opening as Restaurant LaRue in 1944, the latest venture of Billy Wilkerson, Hollywood trade journal publisher and former owner of popular Strip nightclubs Café Trocadero and Ciro’s. A restaurant-restaurant rather than a restaurant-nightclub, LaRue quickly caught on with the movie colony. It wasn’t noted for brawls and rarely advertised, because it didn’t have to. As Time magazine wrote in a piece on Wilkerson for its July 4, 1944 issue, “All Hollywood knows that Restaurant LaRue is the fashionable place to dine. Every evening some 280 fortunate film colonists jam the pistachio & cocoa-striped booths, patiently wait their turn in the ebony-&-red-leather bar, or crowd the overflow tables on the flower-boxed French terrace. Every evening hundreds of disappointed latecomers must take potluck elsewhere.” 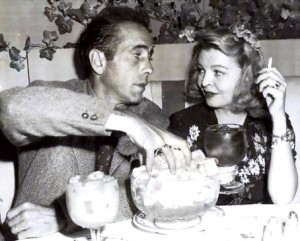 Bogart and wife Mayo Methot at LaRue in 1944. 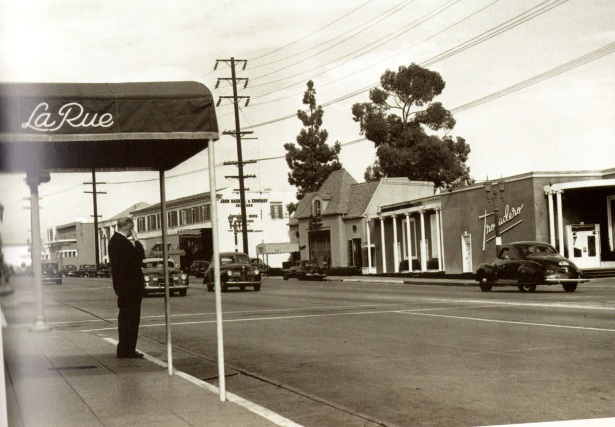 A view of The Sunset Strip from LaRue c. 1947. Across the street is the Trocadero; next to the Troc is 8606 Sunset (formerly Adrian’s antiques and interiors), then Mocambo and the Crillon restaurant.

Wilkerson sold his interest to a partner and his longtime chef in 1950 and opened LaRue Las Vegas the same year with partner Nola Hahn. LaRue operated until 1969. The remodeled restaurant became Nicky Blair’s in March 1972.