9131 is another Sunset Strip address with a rocky history. During Prohibition there was a roadhouse here called Beverly Tavern. By February 1935, with liquor sales legalized, it made no bones about what went on inside, calling itself the Hangover Café only to be promptly raided for violating the 2 a.m. closing law. Proprietors Larry Arlen and Elsie Robinson accused the State Board of Equalization (SBE), who regulated liquor licencing, of shaking them down, claiming that they were raided because they refused to pay and were raided. The SBE denied the charge. In any case, as of October 1935 9131 had become the Centaur Club (shown in top image). As of February 1936 was run by underworld figure James “Jimmy” Utley and lost its license but continued to operate without one.

By November 1941 it was one of several Sunset Strip nightspots over the years to be called Club U’Gene (also spelled U-Gene and Eugene) run by Eugene H. Jarvis. As Club U-Gene it was raided several times between 1941 and 1944 as a so-called “bottle club,” operating sans license. As of December 1945 it had become Elmer’s Fireplace, owned by Pierre Vidalis. In July 1946, Elmer’s Fireplace was threatened with the loss of its liquor license for selling liquor after hours; it ceased advertising in August. 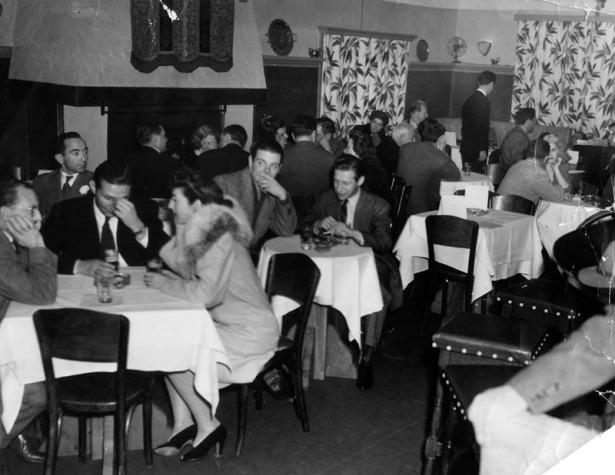 The fireplace of Elmer’s Fireplace, when it was Club U-Gene, during one of its many raids- this one in November 1941. LAPL.

The location subsequently became the first location of Scandia restaurant, operated by Teddy Hansen and Ken Hansen. Scandia moved across the street to 9040 Sunset in 1958. 9131 became a Belgian restaurant called “Brussels,” run by the Frascati family; the name was soon changed to Frascati Grill, one of a mini-chain (there was another Frascati at 8117 Sunset).