Technically, it was a few paces beyond the generally recognized boundary of the Sunset Strip, but that didn’t stop 9236 from proclaiming itself as Strip real estate. Situated near the eastern terminus of Sunset Boulevard equestrian path, it is yet another Strip address with a history of frequent name/ownership changes and raids.

9236 started out as The Willows in the early 1930s. In December 1933 the former Willows was being run by Strip regular Eugene Jarvis and experienced its first (post-Repeal) raid of record. In March 1935 Club Eugene was again under fire for violating the 2 a.m. closing law.

On May 26, 1938 it opened as Club Morocco but by Oct 1938 it had become Jerry’s Mandaly (affiliated with the famous Jerry’s Joynt restaurant in Chinatown) and as of February 4, 1939 it was Neville Fleeason’s Mandaly and raided for liquor violations in October. In 1940 it operated briefly as The Sphinx Club run by George Goldie, a gambler once associated with the Clover Club at 8477 Sunset, which had once been known as The Sphinx Club itself. As of June 25, 1941 “Gogi” announced that it would be doing businesses as the Garden at Scheherazade. In early 1942, Felix Young, formerly affiliated with both the Trocadero and the Mocambo, the opened the “Little Troc” Club (or Little Club) here and was raided for after-hours liquor sales in 1943. 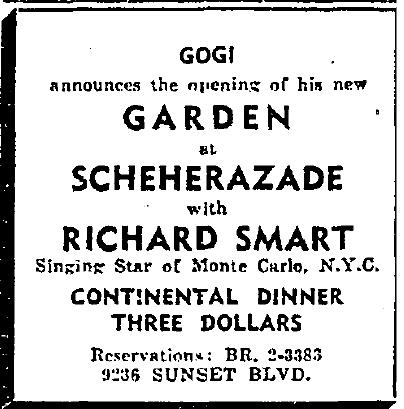 As of late 1945 it had become Colony House, run by gambler Eddie Nealis, who was also once associated with the Clover Club and had apparently also been running a gambling club at 9216 next door. 9236 was still Colony House in April 1946 when it was robbed, but was Henri’s by June 1946, run by Henri Chapentier and offering luncheons on the patio. The top image shows Henry’s signage and umbrellas on the right, with a glimpse of 9216’s tile roof also. Henri’s yielded to Le Pavilion by December 1947, again with Felix Young as its (asserted) owner.

Henri’s, “where the Sunset Strip meets the Bridle Path.” 3-26-1947. Gala Easter Hat Show featuring Keneth Hopkins Hats. Hopkins designed many hats for the movies in the 1940s, most notably the “phantom lady” hat in the 1944 film of the same name.