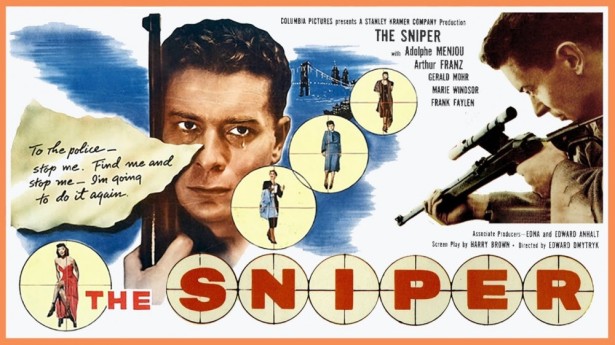 The Sniper is a disturbing serial-killer themed film noir from 1952. To Los Angeles audiences, the film’s theme- a lone male stalking female victims at random and shooting them from a sniper’s vantage point- must have seemed awfully familiar. The city had just caught its own “phantom sniper” who had had local women on edge since the previous summer.

The first two mystery shootings barely made the news. The evening of August 27, 1951, 21-year-old housewife, Lois Kreutzer, was calling a doctor about her sick infant from a phone booth near her home in semi-rural Pico Rivera when a bullet shattered the glass, striking Mrs. Kreutzer in the left lung. She was taken to the hospital in critical condition. The bullet had been fired from a 22-caliber rifle by an unidentified person. 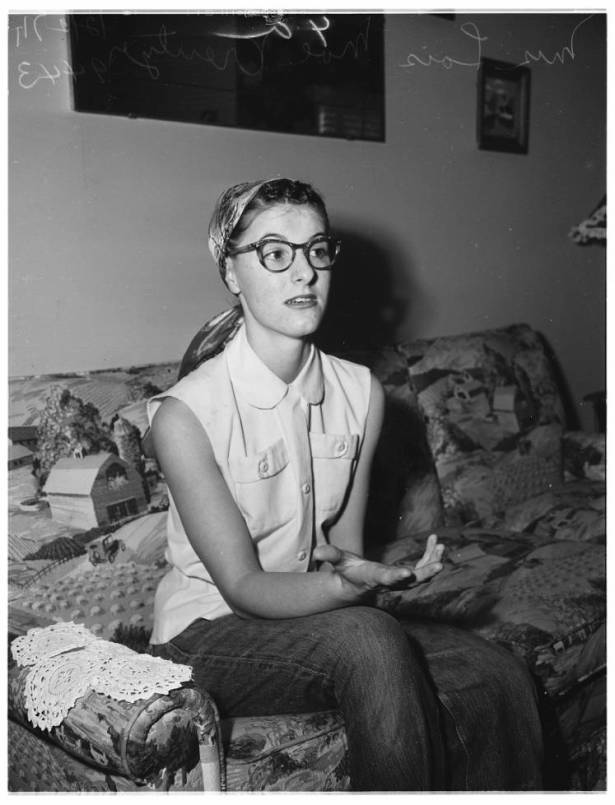 The next night, August 28, a bullet whizzed through a window of a home less than 3 miles from where Lois was shot in what is now Rancho Santa Fe, as the owners, Mr. and Mrs. Lloyd Walter, sat in their living room. No one was injured. The slug turned out to be a 22 caliber.

Then on August 29, Nina Bice, a 25-year-old divorcee and mother of three young children, who worked as a waitress at the Holy Cross Hospital grill, was shot in the head and killed instantly as she sipped coffee at a Scriver’s hot dog stand on South Atlantic Boulevard. A teenage girl seated next to her narrowly missed being struck as well. The unseen gunman vanished.

Even before sheriff’s ballistics experts confirmed that the bullet that killed Mrs. Bice came from the same hunting rifle Lois Kreutzer was shot with, as well as the shooting at the Walter home, newspapers went wild over the story of a phantom gunman. The city was still on edge from a string of unsolved brutal murders of women in the all too recent past. The idea of a maniac picking off victims at random was unsettling. The investigation ultimately revealed nothing, other than the fact that there were a lot of young men roaming the city environs toting well-stocked arsenals in their cars.

Just as tensions were starting to die down, a 10-year-old girl, Patricia Bryant, was struck in the arm as she waited for the school bus in semi-rural Downey, shattering a bone. It was believed the shooter had concealed himself in an orange grove across the street, and, although sheriffs recovered neither the slug nor the shell casings, newspapers speculated that the phantom sniper might be on the prowl again.

A month later, housewife Irma Megerdle, 40, was shot in the thigh in the garden of her Pico Rivera home. This time, the sheriff’s ballistic expert concluded the bullet had probably not come from the same gun as the one used in the Nina Brice and Irma Kreutzer shootings.

The day after Christmas, housewife Audrey Murdock, 42, was shot just below her heart while she stood in the kitchen of her rural San Gabriel area home doing the family ironing. It was believed the gunman had lurked outside her window. She was taken to the hospital in critical condition. Sheriffs investigated a possible link to the “phantom sniper” but his trail seemed to again go cold. 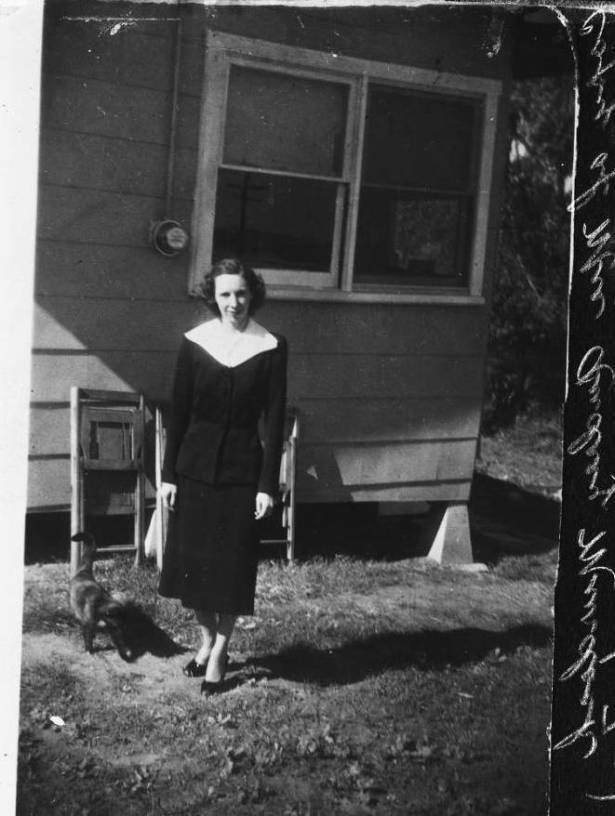 On the night of April 1952, Evan Charles Thomas of 9416 Pioneer Boulevard, Rancho Santa Fe, enjoyed an evening of socializing and television watching at the home of his two-doors-down neighbors John and Joann, departing about 9:45. Only minutes later, a shot rang through the Hines’ living room window and lodged in the wall not far from where their small son lay sleeping. Before Mrs. Hines could call the sheriff, the phone rang. It was Thomas, wondering if she’d heard a gunshot. Sheriffs arrived and began questioning the curious neighbors who’d gathered outside on the trim lawn. One of them was more curious than anyone else: Mr. Thomas. So curious, in fact, that the officers grew suspicious. They decided they had some questions for him of their own and brought him in.

Once in custody, Thomas blurted out a confession: he was the phantom sniper.

Joann Hines points to where the shot rang out. Herald Examiner Collection.

Originally from Ohio, Thomas, who was in his late 20s, had come to California while he was serving with the Air Force. He now worked as a railyard switchman. Far from a moody loner, he was married, with two young children and another on the way. When his wife left to visit her mother on August 27, 1951, he felt “at loose ends” he said, so he grabbed the rifle and went driving around. He spotted Lois Kreutzer in the phone booth and took a shot at her “on impulse,” hiding among a stand of avocado trees to get a bead on her. He described lurking in an orange grove across from Irma Megerdle’s before shooting her, and spotting Nina Bice at the hot dog stand. He admitted shooting up the Walter house, and firing on Patricia Bryant and Audrey Murdock. “I just drove around and picked them at random,” on his way to work or on household errands he said, admitting the selection of victims was “erotically motivated.” Later the same day he led D.A. investigators and sheriff’s officers on a tour of the locations.

At Scrivner’s, where Nina Bice was killed.

Thomas told authorities he leaned on rail of an empty home, 9410 Pioneer Boulevard, to fire into the home of his neighbor, Joann Hines at 9402 Pioneer Boulevard. Thomas’ own house is on the right. UCLA Herald Examiner collection.

Thomas claimed he’d purchased the rifle used in the shootings a couple of months before the spree began, but investigators later found he’d bought the used weapon at a Monterey Park hardware store for $10 on August 25, 1951- just two days before using it to critically wound Lois Kreutzer. 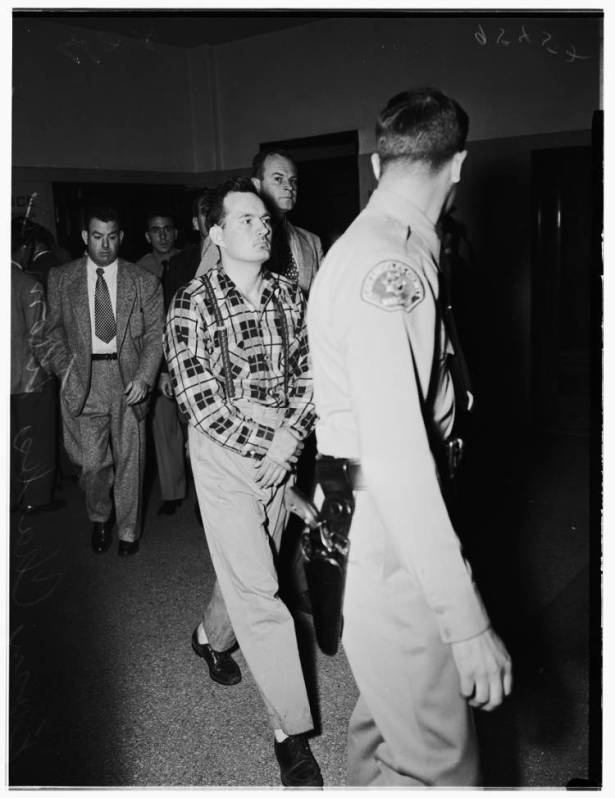 He was charged with 1 count of murder and 6 counts of assault with a deadly weapon.

By coincidence, The Sniper was released in Los Angeles theaters on May 14, 1952. On May 15, Thomas pleaded guilty to the charges against him. 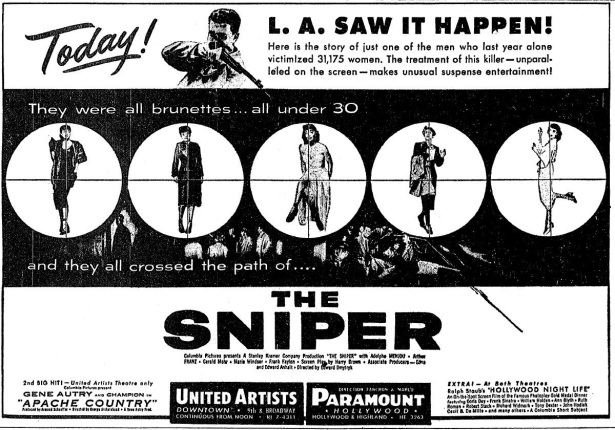 The Sniper was definitely not about the Thomas case. LA Times’ longtime film critic Philip K. Scheuer reported back on May 31, 1951 that Stanley Kramer Productions had purchased “The Sniper” story from husband and wife writing team Edna and Edward Anhalt. Thomas didn’t begin his shooting spree until three months after that. (Arthur Franz was cast in the role of sniper on August 27, 1951, the day of the first Thomas shooting). But the opportunities to capitalize on the headline-making sniper case were not overlooked. “L.A. saw it happen!” the local ad for the film blared. Chief of Police Bill Parker was said to have signed a letter praising the film’s realism in its “handling of intensive methods” to track down the killer. In his review, Scheuer noted, “the parallel is too close for comfort, but even without the similarity between Eddie Miller and an alleged local “sniper” the picture would be distasteful.”

Whether influenced by all the “psychological mumbo-jumbo” of The Sniper or not, on May 23, Thomas’ lawyers withdrew his guilty plea and pleaded innocent by reason of insanity. The court appointed psychiatrists to examine Thomas, who remained in custody in the Los Angeles County Jail.

In a noir twist, Thomas’ cellmate during part of his stay was film producer Walter Wanger, convicted for shooting agent Jennings Lang on December 13, 1951 in a scuffle over Wanger’s wife, film noir favorite Joan Bennett.

Mental expert Dr. Edwin McNeil examined Thomas on June 30 and pronounced him sane and mentally competent. County Jail physician Dr. Marcus Crahan described him as a “low-grade moron,” a sort of sub-normal Mr. Everybody, “the much-used protagonist of psychological novels,” who “let his frustrations and worries lead him into strange channels.”

The Sniper was still playing in some area neighborhood theaters when the four-day trial began July 1. Witnesses to Nina Bice’s murder and Thomas’ living targets, including 10-year-old Patricia, testified, just as they had at his preliminary hearing. “He stalked his victims like a beast in the jungle, making sure that these women he shot would be unaware of his presence,” Deputy D.A. J. Miller Leavy said in his closing arguments. The defense argued that an auto accident in May 1948 had impaired Thomas’ reasoning. 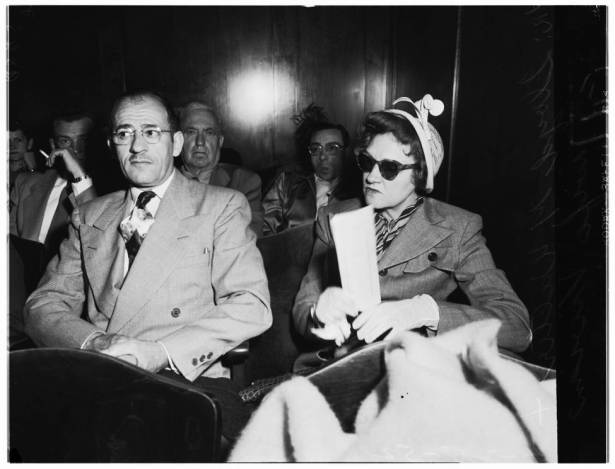 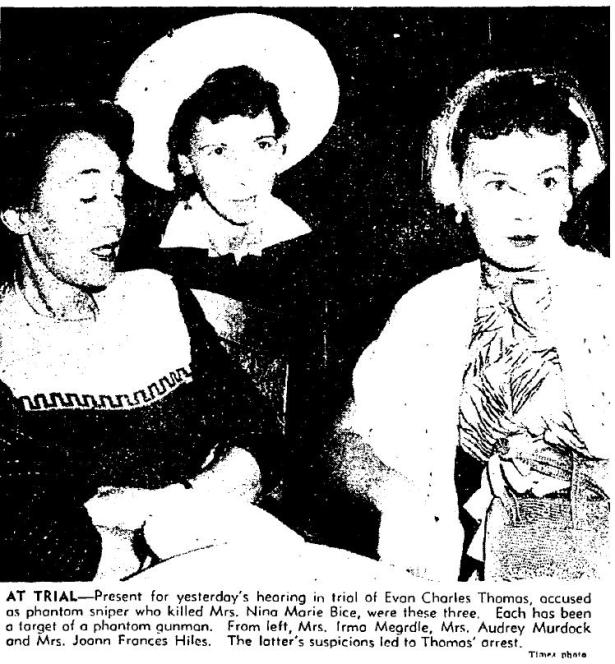 Itma, Patricia and her mother at the preliminary trial 4/25/1952. Herald Examiner Collection.

The jury came in with a verdict of guilty and recommended the maximum punishment: the death penalty. The judge agreed, and the sentence was meted out on July 7.

Thomas was transferred to San Quentin while the State Supreme Court reviewed the case- required for all death penalty cases. The court upheld the sentence on September 18, 1953 and on January 29, 1954, Thomas was executed.

Though filmed largely on location in San Francisco, the Long Beach Pike stood in for Playland at the Beach in The Sniper.

The Sniper’s Eddie Miller walks past the “Laff in the Dark” funhouse, where, years later the mummified remains of bandit Elmer McCurdy would be found. 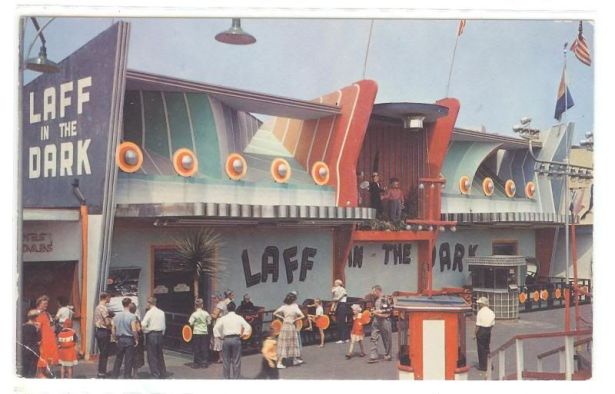