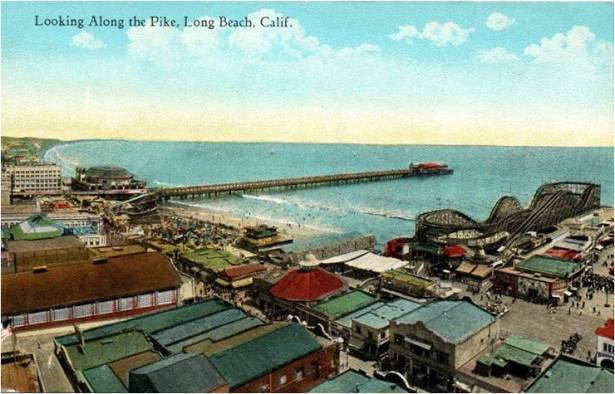 The Pike was an amusement zone that ran parallel to the Long Beach shoreline between the municipal pier at Pine Ave. to the east and Chestnut Place to the west. Silver Spray Pier, with its Jack Rabbit Racer roller coaster, extended out over the waves at the west end of The Pike. 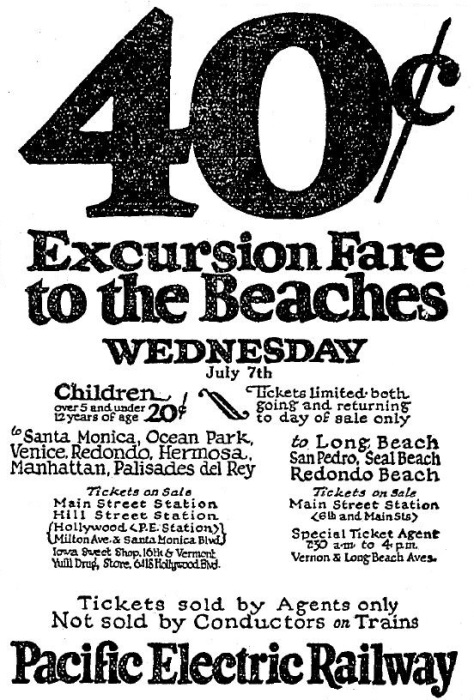 The Pike had been around since 1902, when the Pacific Electric Railway’s red cars reached Long Beach from Los Angeles.

The double-decked pedestrian-only municipal pier extended from Pine Avenue. It was used mainly for strolling and fishing. This c. 1926 view shows the new Breakers Hotel (right).

The building at right is the 1905 Municipal Auditorium. Located at the foot of Pine Avenue next to the pier, it was built out over the ocean with an open arcade on the 2nd floor. The tall building on the inland side is the 1919 Markwell Building, which was bought out by Andrew T. Jergin’s Jergin’s Oil Co. in 1926 and became known as the Jergins Trust Building. 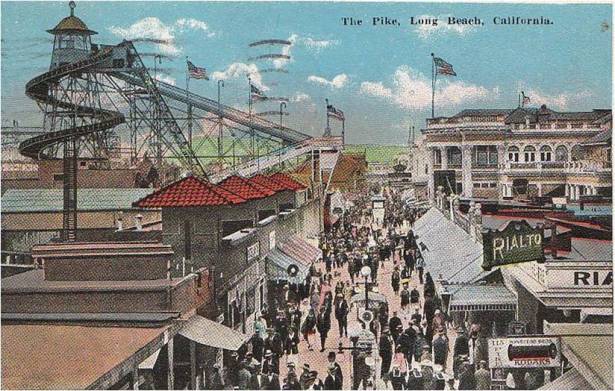 The Pike’s attractions changed over time. Entrance to the Rialto Theater at 117 W. Pike, is on the right. A souvenir shop next door is selling Kodak film. The tall structure on the left is the sky-high Bamboo Slide.

Charles I.D. Looff, who also operated the carousel down the way, commissioned The Whip and the bamboo slide, aka the Dragon Bamboo Slide, in 1918. 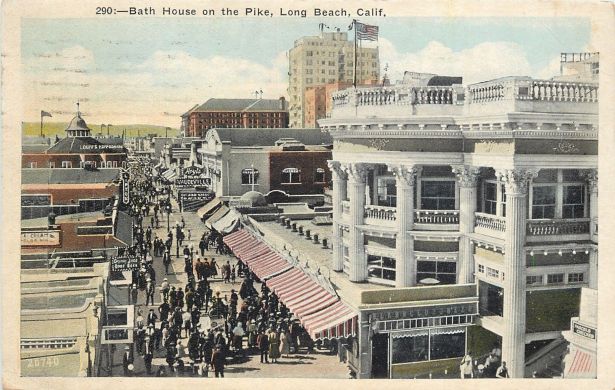 The classical-columned Long Beach Bath House and plunge (swimming pool) was a landmark of the Pike. Just beyond is Lipton’s jewelry store, the Looff Hippodrome and Hoyt’s vaudeville theater (later renamed The Strand).

The Long Beach plunge was one of several promoted by the Southern California Plunge Bathing Association as an aid to health. Thanks to the modern indoor plunge, swimming could be enjoyed year round, day or night. 4-1-1926. 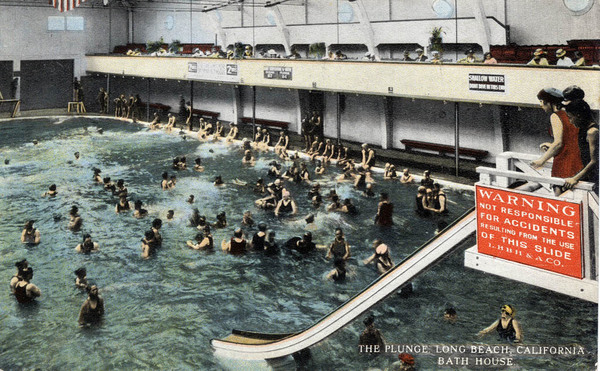 The courtyard of the Bath House showing the Bee Stand popcorn vendor (later George’s). The curved storefront with the awning between the staircases housed a cigar stand. The double-awninged stand housed Pearl Rogers’ embroidery shop. LAPL. 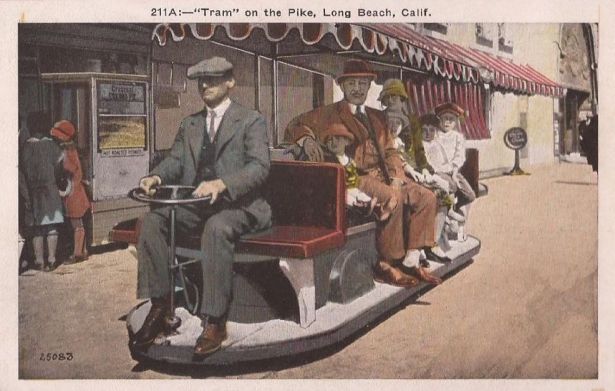 One of the electric trams that cruised The Pike. 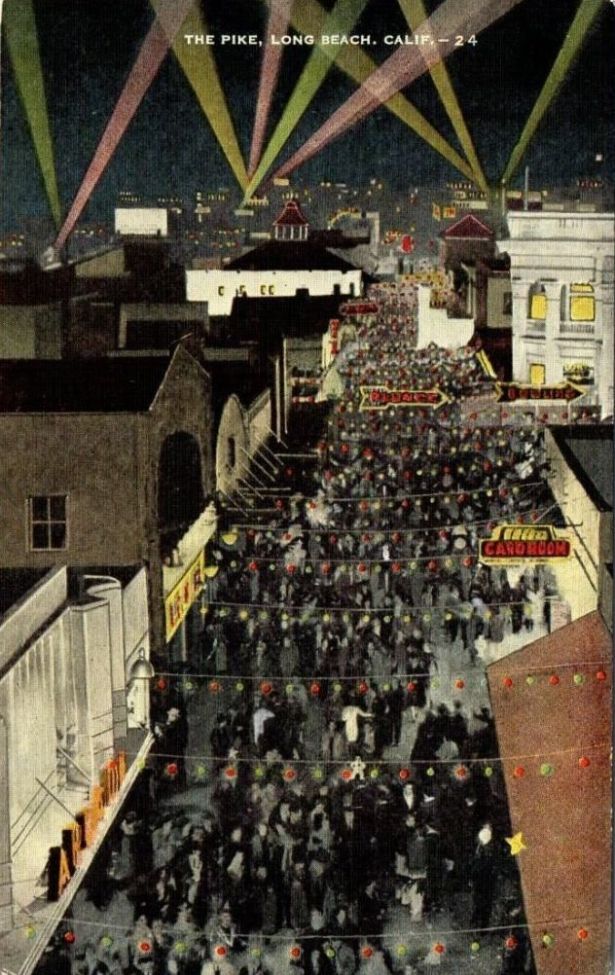 It’s doubtful anyone actually counted them, but the midway’s “Walk of a Thousand Lights” lit up the Pike at night all the way to Chestnut Place.

In the thick of the midway. The Majestic Ballroom (later renamed the Lido) had originally been a skating rink. The beach towns typically flouted Los Angeles “blue laws” that prohibited dancing on Sundays. Hoyt’s Theater is just beyond, with the tower of the Breakers Hotel peeking out behind the flagpole. On the ocean side: the arrow-shaped sign of Lipton’s Jewelry; Benjamin F. Simond’s Aquarium, “The finest collection of ocean fish in America;” and Cunningham’s lunch counter. 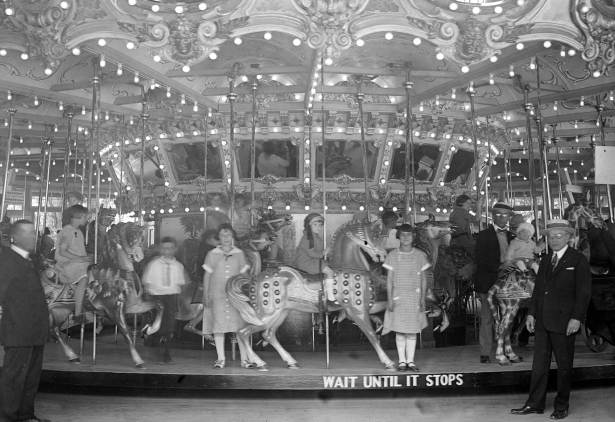 Charles Looff built the Pike’s merry-go-round in 1911 and housed it in the Looff Hippodrome near Cedar. Circa 1927-1932 it was moved across Cedar. LAPL

In May 1914, the Neptune Pier Co. received a 35 year lease to operate an amusement zone at the west end of the Pike.

The Jack Rabbit Racer dominated Silver Spray pier from 1915 until 1929. The Cyclone Racer opened in its place Memorial Day weekend 1930.

The Dodg’em cars (right) were one of the longer-running attraction on the pier. LAPL 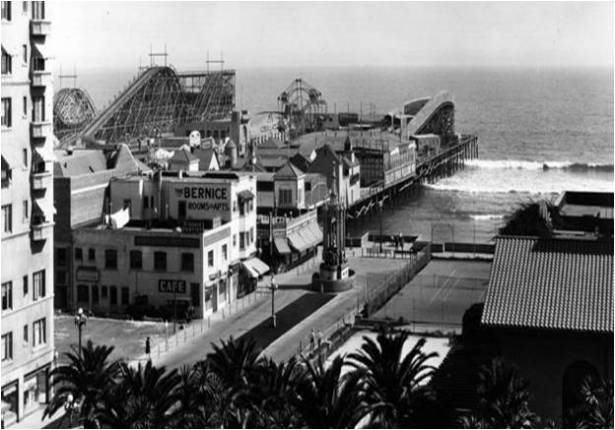 The west end of the Pike at Chestnut Place c. 1926 showing Silver Spray Pier. The newly-erected Victory Fountain stands in the center of the street. The Virginia Hotel’s tennis courts can be seen at right. LAPL.

The Victory Fountain was a new addition to the north end of the Pike at Chestnut Place in September 1926 in remembrance of World War I veterans. Designed by Edwardes Sproat, it stood 45-ft. high and was equipped with electric lights that flashed in time to the water’s spray. At the top was a mirrored ball that reflected the lights at night. Postcard view and 9-26-26 LA Times.

The red-roofed Virginia Hotel opened in 1908. It fell on hard times and was demolished in 1933.

In just a few years, the Pike area would change drastically. March 1929 saw the beginning of dredging and fill work for the construction of a new municipal auditorium and concrete horseshoe-shaped pier to the south that replaced the old wooden structures. The Pike and Silver Spray Pier suffered through the Depression and the 1933 Long Beach earthquake, but kept going, as popular as ever, for many years to come.

2 thoughts on “The Long Beach Pike”