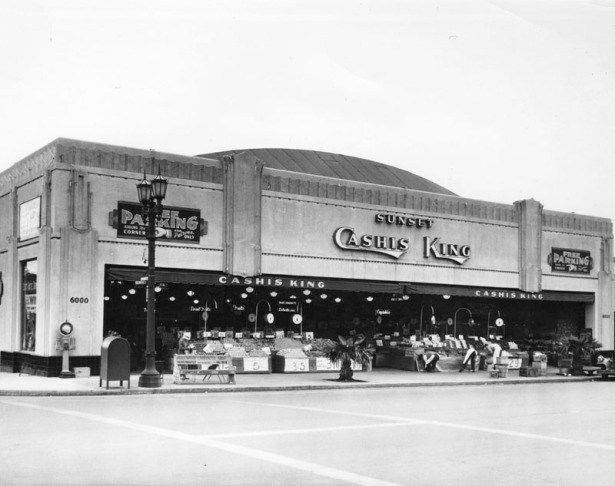 6000 Sunset Boulevard, on the corner of Gordon Street, was designed in the art moderne style in April 1933 by architect Harry L. Pierce. It opened that summer as the Sunset Cashis King Market.

Cashis King was one of Hollywood’s famous open-air markets (much commented-on by tourists) where the colorful displays of fruits and vegetables spilled out over the sidewalks year round.

1933 ad for Cashis King Market, 6000 Sunset Blvd. The NRA “We Do Our Part” eagle at left has nothing to do with guns- it’s the National Recovery Administration, one of FDR’s new New Deal programs. 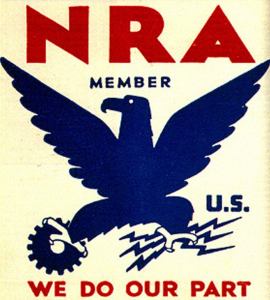 Cashis King remained at this location through 1937. In August 1940, it became Columbia Square Market.

In June 1942 6000 Sunset Blvd. opened as the Hollywood Casino nightclub, run by Joseph Zucca. This involved alterations to the building, such as enclosing the Sunset facade, as well as interior modifications.

Yvette Dare and her sarong-stealing parrot at Hollywood Casino, November 1943.

By November 1943, with thousands of US military personnel passing through town, Hollywood Casino was featuring burlesque acts like “Yvette Dare and her sarong stealing parrot.” 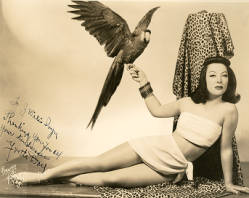 Yvette Dare and her sarong-stealing parrot in 1942. University of Washington digital.

But it wasn’t enough, apparently, to keep the struggling nightclub afloat. On February 2, 1944, it reopened as Madame Zucca’s Hollywood Casino. Joseph Zucca’s mother, Victuria (Victoria) Zucca had operated Madame Zucca’s Inn, a cafe and hotel, in downtown Los Angeles until her retirement in 1932. But even nostalgia, Mama Zucca’s French Italian cooking, or new names were able to save the venture, which changed its name to Madame Zucca’s French Casino in June 1944. The fixtures and equipment were put up for auction in September 1944. 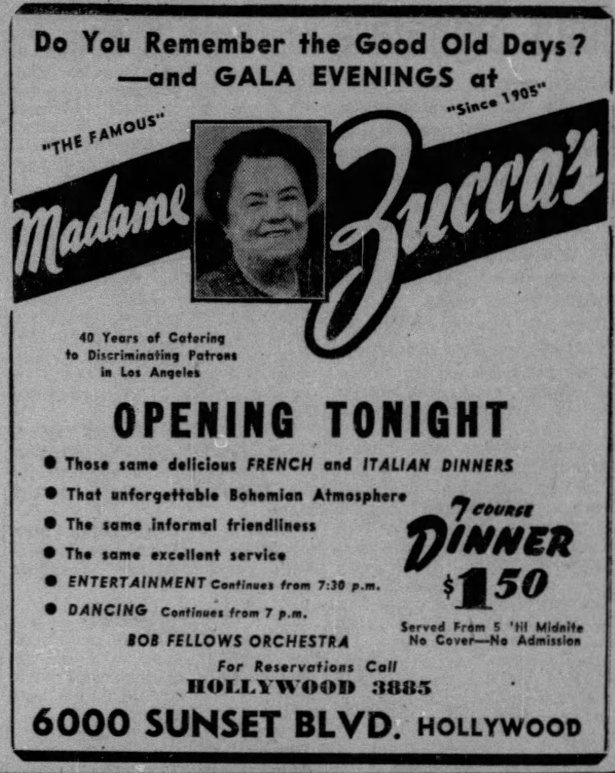 February 1944: no sign of Yvette or her parrot, just the wholesome image of Madame Zucca. 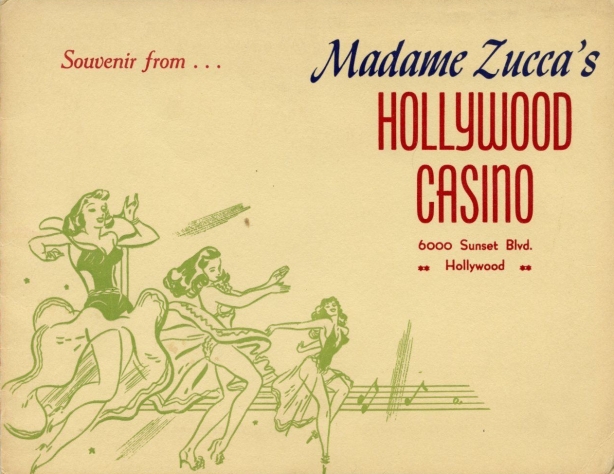 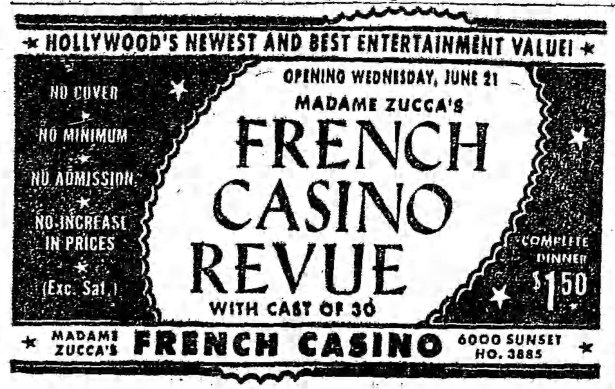 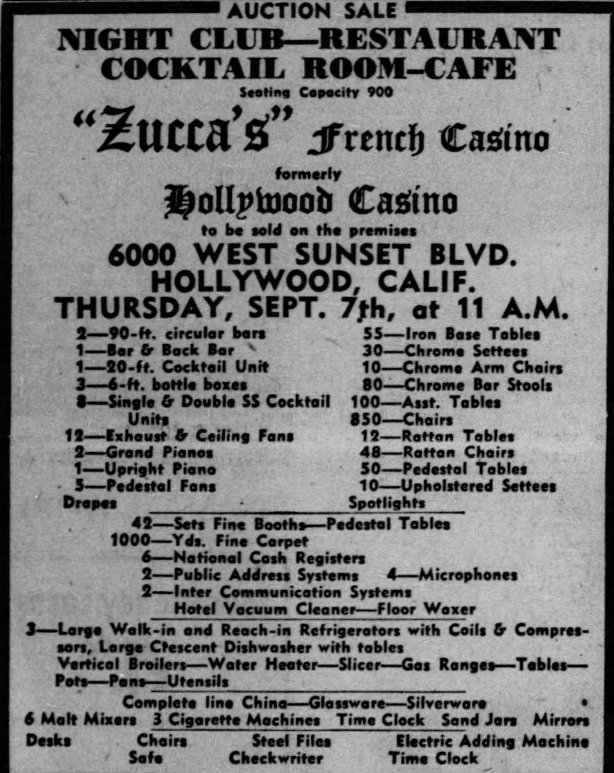 Others tried to make a go of 6000 Sunset Boulevard as a nightclub. On September 30, 1944 after undergoing a theme change from French to Western, it reopened as the Sunset Rancho with headliner Spade Cooley (this was the heart of Gower Gulch, after all). But the place didn’t click, and 3 months and yet another theme later, on December 30, 1944, it opened as the Gay ’90s style Bowery Music Hall Follies. It, too, fizzled. 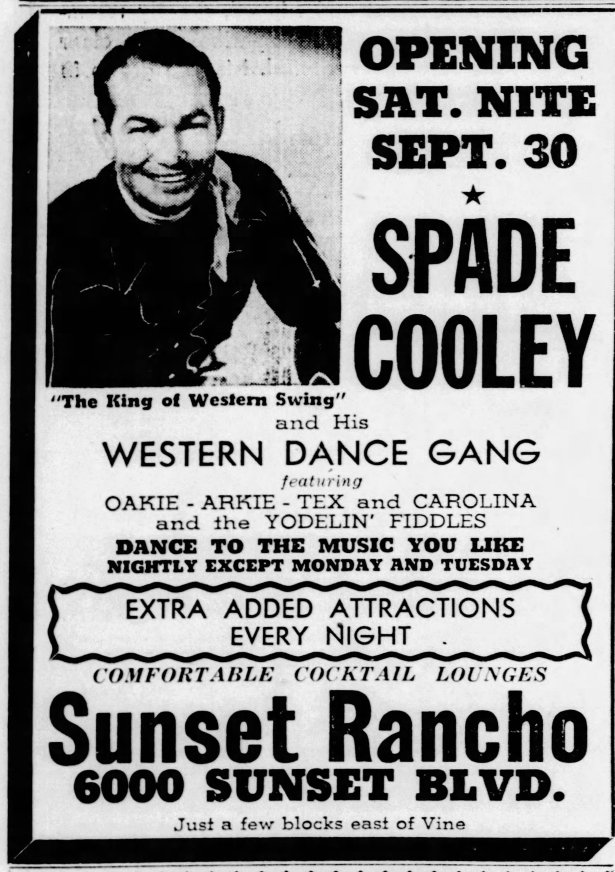 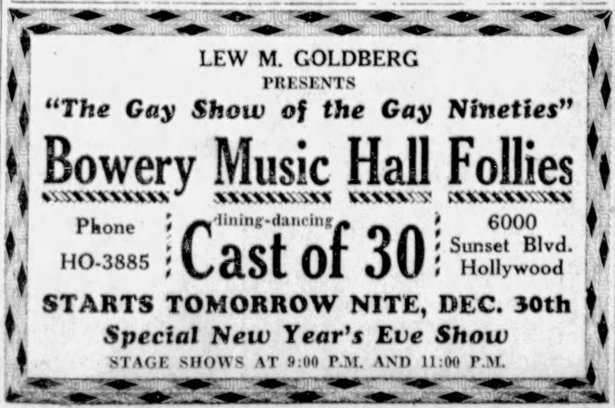 After this, the building’s market and nightclub days were past. It was used primarily as a radio broadcasting center and recording studio, with offices and schools (some of them shady, fly-by-night operations) for television and radio professionals. It also housed a auditorium available for large meetings, events, and theatrical performances. The building is extant and is presently still used as a recording studio. 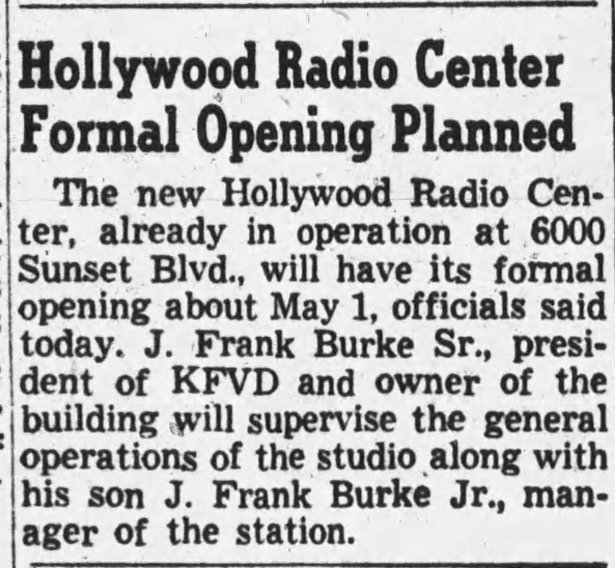