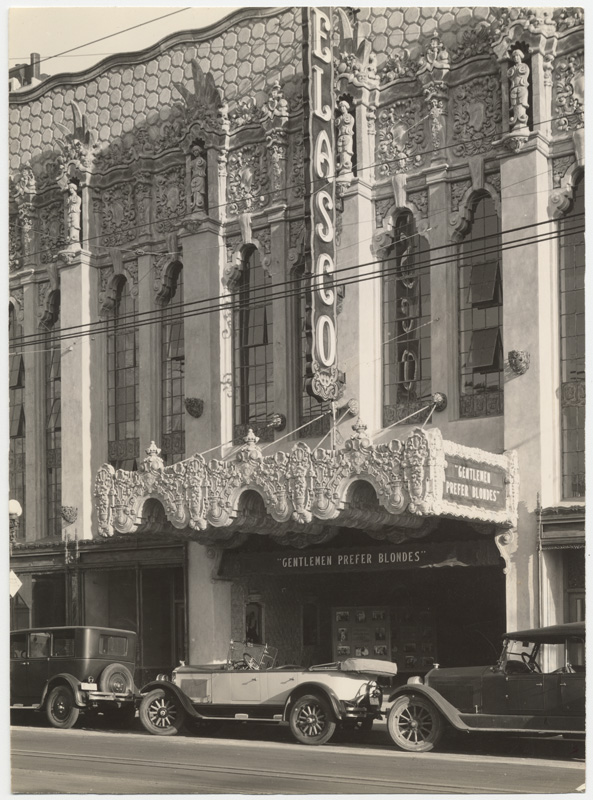 It was a double premiere- the opening of the new Belasco Theater at 11th & Hill streets and the Los Angeles debut of Gentlemen Prefer Blondes on November 1, 1926. Author Anita Loos and the crème de la crème of filmdom society were in attendance. Both the play and the theater were a hit. History doesn’t record whether the theater’s major financial backer enjoyed the show; he was about to leave for Washington, D.C. to testify in his bribery trial.

Construction of the new Belasco Theater Feb 1926. The Los Angeles Railway Building is behind it on Broadway; the tall structure under construction is the Commercial Club building (later Case Hotel). Across the street is William Randolph Hearst’s Los Angeles Examiner building. CSL collection

Operation of the new theater was headed by Edward Belasco, brother of the big New York theater man David Belasco, who’d given Ruth St. Denis her start on the legitimate stage back in 1910. Designed by Morgan, Walls and Clements, at 1100 seats the setting was intimate, the acoustics perfect. Los Angeles Times arts critic Edwin Schallert praised its “old-gold luxuriance” and lack of ostentation. Local oil billionaire Edward L. Doheny, Sr. put up most of the reputed $1,2500,000 cost of building the theater.

Ready to open. The retail shops are still vacant. The upper floors were eventually leased to a dancing academy. CSL collection.

Belasco, like his counterpart A.L. Erlanger at the Biltmore Theater, was focused on bringing Broadway shows to the west coast simultaneously, or as nearly so as possible, with their Manhattan debuts. Based on Anita Loos’ 1925 book about the adventures of gold-digging flapper Lorelei Lee, Gentlemen Prefer Blondes opened at the Times Square Theater in New York only a little over a month earlier and was still enjoying a hit run. In the past Los Angeles had had to wait some time for shows to make it out west.

The audience list for the premiere read like a Who’s Who of early Hollywood: besides Loos and husband John Emerson (credited as co-author of the stage version), it included Harry Langdon, the Charlie Chaplins (Lita Grey), Buster Keaton and his sister-in-law Constance Talmadge, the Harold Lloyds (Mildred David), sisters Viola Dana and Shirley Mason, Marie Prevost, Ruth Roland, the John McCormicks (Colleen Moore), Pola Negri, Ramon Novarro, John Barrymore, Lon Chaney, Lillian Gish and Bebe Daniels. Irving Thalberg escorted future wife Norma Shearer. The papers don’t mention whether Doheny was present to see the playhouse he’d financed; he was under indictment for conspiracy in the Teapot Dome oil lease bribery case along with former Secretary of the Interior Albert B. Fall and was due in Washington to testify a few days after the Belasco opening.

A close-up of the marquee. CSL collection. 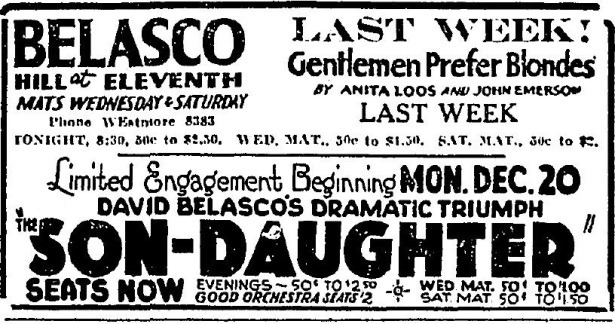 Because of Los Angeles’ enthusiastic reception of the play it was held over for an extended run, closing on December 18, 1926. The next show, David Belasco’s The Son-Daughter, opened December 20.

In helping finance the Belasco, E. L. Doheny hoped to start a new legitimate theater district west of the existing one along Main St., where the Burbank Theater was staging its latest burlesque show called, not un-coincidentally, “Ladies Prefer Gentlemen.”

Taken two days after the Belasco Theater opened, this photo shows excavation underway for what would be the Mayan Theater next door, which opened in 1927. Though the Mayan and the Belasco survived to the present, the Hill Street theater district never really took off. CSL collection.

2 thoughts on “The Belasco Theater”