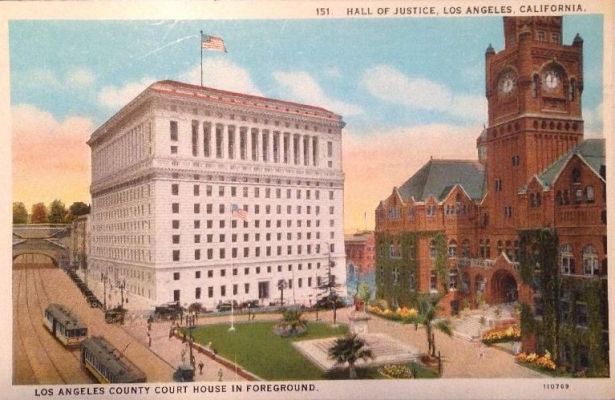 Los Angeles could be justly proud of the shining white temple that opened in February 1926. There was high praise all around for the design by the Allied Architects Association and the beautiful interior appointments, which lent a dignity to what were often sordid proceedings. But almost immediately it was tainted by controversy when several prisoners escaped from its “escape-proof” jail, and then there was the sheriff’s wild party on the roof…

Originally planned as just a 5-story addition to the existing 1880s county jail, the case was made that the growing metropolis clearly needed a larger building. Demolitions and excavations for new structure at N. Broadway, Temple and New High streets got underway in January 1923. Hundreds turned out to see the laying of the cornerstone on January 26, 1925. The new building housed number of county offices under one roof including the Coroner, Sheriff, and District Attorney. The classical temple on the top four floors housed the county jail. 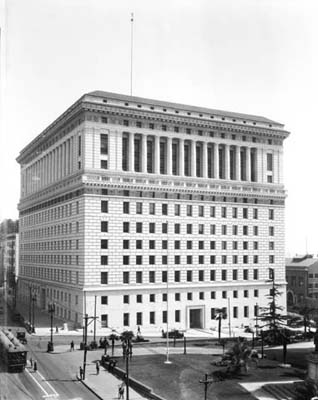 Many courtrooms and offices moved from the 1891 red sandstone courthouse on “Poundcake Hill” and elsewhere starting in January. On February 4, the public had the chance to tour the building before prisoners were transferred from the old jail on February 7. 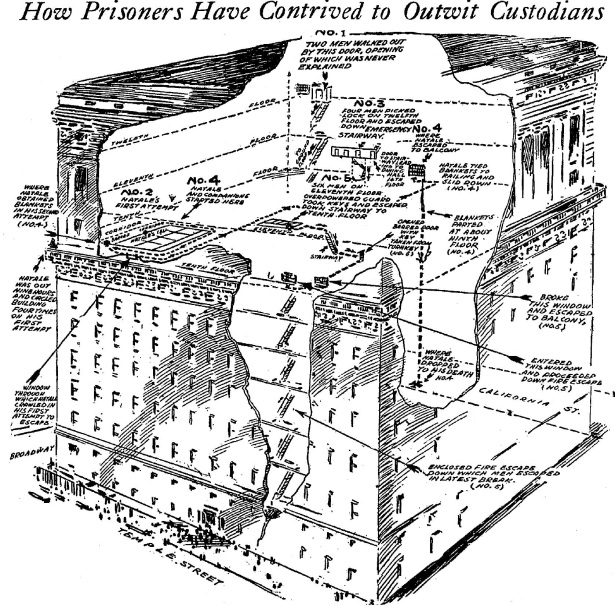 The first prisoner escaped before the jail was even occupied- he was Donald B. Spencer, a trustee sent to sweep out the new quarters. He simply walked away.

The next break happened on February 15 when two men escaped via a fire escape door on the 12th floor. On March 2, four men picked a lock with eating utensils and made their getaway. Bitter finger-pointing between Sheriff Traeger and County Supervisor Bean (who had overseen the Hall’s construction) led to a Grand Jury investigation into both the management of the jail and whether public money had been misappropriated in the construction. The latter charge was ultimately dismissed by the Grand Jury as baseless, and there were those who thought the whole thing had been a ploy by Mayor Cryer’s political machine to eliminate troublesome County Board members and manipulate the Grand Jury for its own purposes. If so, it didn’t work.

The next escape happened on March 2. Four men walked away from “mop detail” when a guard “turned his back,” exiting by the emergency stairs. Two of the men were recaptured hours later but the other two remained at large.

One of them was Jack Gordon. In November 1925 Gordon had been working as a valet for a man named John Osborne at the Maryland Hotel in Pasadena. Osborne was in his bath one morning when he noticed his valet wasn’t there to hand him a towel; he’d absconded, taking with $100k worth of Liberty Bonds.

Turns out, Gordon was no Jeeves- he was a Chicago gangster whose real name was Harold J. Whittaker. Maybe Osborne didn’t look too closely at his references, being a felon himself after recently being found guilty of using the U.S. mail to defraud investors in his Valhalla cemetery scheme.

In January Pinkerton detectives located Gordon in Cleveland and he was extradited to Pasadena. There was a flurry of nervous excitement in February when rumors circulated that “Chicago henchmen” were headed for California to spring their pal Gordon. Nothing came of it, but Gordon made good his escape on his own. He was recaptured in New York in November 1927.

The old county jail, the Hall of Justice, and the L.A. County Courthouse

The final 1926 escape from the new Hall of Justice jail was tragic: on March 7, a 16-year old boy attempting to make a break for it using the old blanket-rope ruse fell to his death from the 10th floor. The Coroner’s jury found faulty construction of the jail and lack of sufficient guards to blame for the youth’s death.

There would be many reports of leaks within the Hall of Justice, but they weren’t usually this literal. The gilded ceiling of Superior Court Judge Hardy’s courtroom began leaking on the afternoon of April 16, 1926. At first the judge called for umbrellas and carried on, but as the deluge worsened court had to be dismissed. The source was later traced to a backed up grease trap in the jail kitchen on the 13th floor. 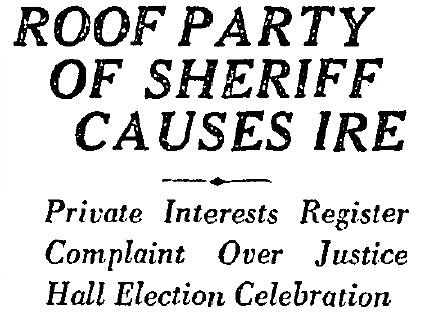 On the last day of August there was a minor scandal when it was reported that Sheriff Traeger had held a private party on the roof with boxing exhibitions, dancing and vaudeville entertainment to celebrate his landslide victory as the nominee for sheriff. The sheriff’s office insisted there’d been no wrongdoing- after all, Mrs. Traeger and “1000 of the best people in town” had attended. No one was too outraged, and Traeger was elected to the second of his three full 4-year terms in November.

3 thoughts on “The Hall of Justice”