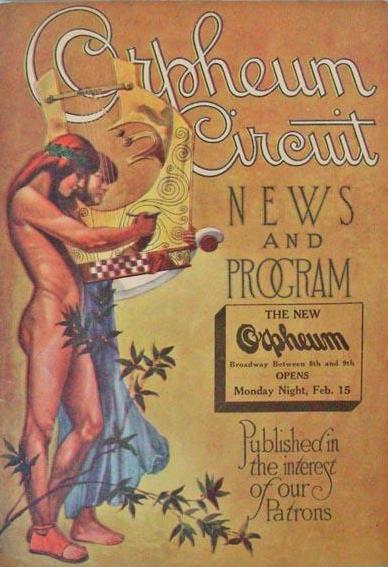 Located at 842 S. Broadway, Shultze & Weaver were the architects of the building, G. Albert Lanburgh designed the theater. Lanburgh was responsible for several other local theaters including new Shrine Auditorium (opened January 1926), and the two previous Orpheum Circuit theaters in Los Angeles: the “old” Orpheum (1911) at 630 S. Broadway, and the Hill Street (1922) at Eighth & Hill. 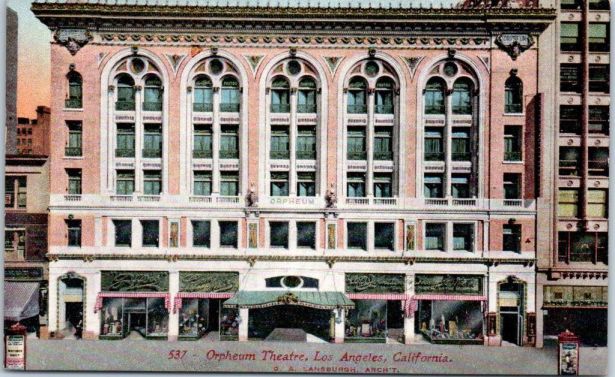 The “old” Orpheum was renamed the Broadway Palace and adopted a policy of vaudeville acts followed by a first-run feature film, a cartoon, newsreel and a novelty short.

Douglas Fairbanks’ The Black Pirate premiered at Grauman’s Egyptian Theater in Hollywood back in May, The week of November 22, 1926 it came to the Broadway Palace with “popular” (reduced) prices. It was indeed shot in Technicolor.

The Hillstreet Theater, also known as the “Junior Orpheum” continued to stage Orpheum vaudeville acts, often with a motion picture as part of the entertainment. It was soon to be renamed the RKO Hillstreet Theater. 12-11-1926

The new Orpheum was strictly for headliners. LA Times Arts critic Edwin Schallert was impressed by the theater’s “elegance without jazz,” noting that it “raises the status of the variety presentation to a new level of class and quality.” 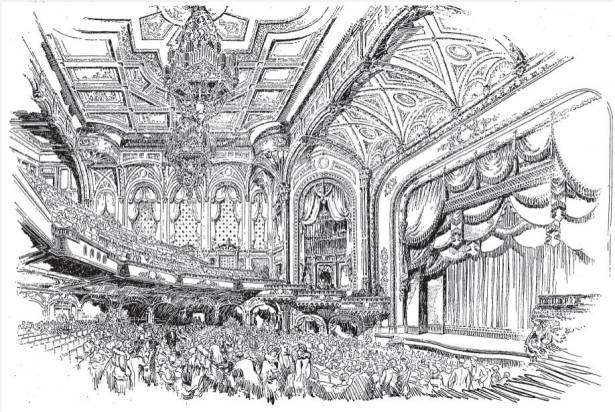 A drawing of the auditorium by Los Angeles Times artist Charles H. Owens, 2-14-1926.

Downstairs from the grand foyer was the Tudor lounge smoking room, decorated like an English drawing room and served by Japanese cigarette girls in “native costume.” As a sign of the times, ladies were invited to use the room as well. 30 usherettes in white and gold uniforms stood ready to escort guests to their seats. The performer’s dressing rooms were just as well appointed. The comfort of animal performers had not been neglected either, with a well ventilated area provided under the stage house.

The opening of the new Orpheum coincided with the vaudeville debut of former Denishawn dancing school pupil Ruth Chatterton. George Lovejoy Rockwell isn’t exactly a household name today but in 1925-1926 he was packing ‘em in at the Palace in New York with his comic doctor routine. Bandleader Henry Santrey was also well known at the time. He was married to Anna Seymour; Harry Seymour was her brother. Santrey and Rockewll evidently went over big on February 15- they were “held over” for a second week.

Headlining for the new Orpheum’s second & third weeks was singer Nora Bayes, who had her own theater in New York. This ad features the endorsement of “Rufas Lee, Omaha Capitalist” who proclaimed “I saw your Orpheum last night- all the big cities of the East will be envious of you.” The Orpheum also claimed it was the “only theater in Los Angeles reserving seats for Vaudeville.”

The Orpheum capped off its inaugural year by throwing a birthday party for the centennial of vaudeville on December 5, 1926.

Reports of the death of vaudeville over the next few years would prove to be greatly exaggerated- it lived on in some form well into the 1940s and classic vaudeville routines were often revived for radio and later reworked again for television. The 1926 Orpheum Theater, though, turned to a mostly-movie policy by the early 1930s. It remains an Orpheum Theater.

4 thoughts on “The Orpheum Theater”