Until the latter half of the 1930s, commercial radio was primarily based in New York and Chicago because the technology that made radio programming possible was oriented for east-to-west transmission, making it prohibitively more expensive to broadcast a show in the opposite direction. The regulations changed in 1935, sending radio rushing to Hollywood just as moving pictures had done in the 1910s.

Of the two major national networks CBS and NBC, NBC was the first to invest hard cash in local real estate, leasing a property from the old Consolidated Film Lab at 5515 Melrose Avenue (near Paramount Studios), vacant since being damaged in a 1929 fire. On July 2, 1935, the LA Evening Post-Record reported that the studio was spending $500,000 to revamp the existing structures. It opened December 25, 1935. 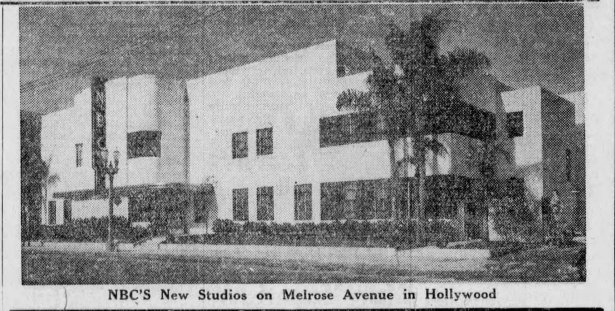 The NBC studio at 5515 Melrose Avenue near the northeast corner of Gower. LAPL collection.

The paint at Melrose Avenue had barely dried when already there was talk of adding even more space. On February 10, 1937, expansion effort was abruptly halted, however, by network president Lenox N. Lohr when he realized there was a serious problem with this location: not enough parking places.

In August 1937 NBC announced plans for a bigger home at the northeast corner Sunset and Vine, and aquired the parcel, bounded by Sunset and Selma Avenue, Vine Street and Argyle, from Paramount Pictures. It had been home to the Famous-Players-Lasky movie studio and was currently occupied by a Carpenter’s drive-in hamburger stand. See Part 1 for more information on the previous use of this property. 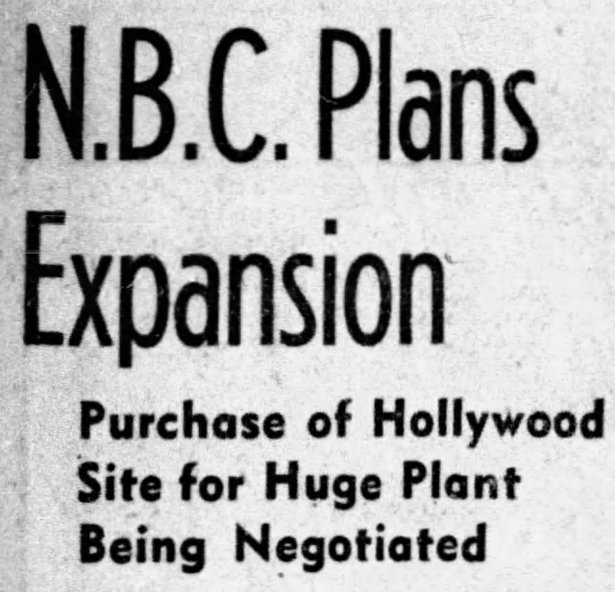 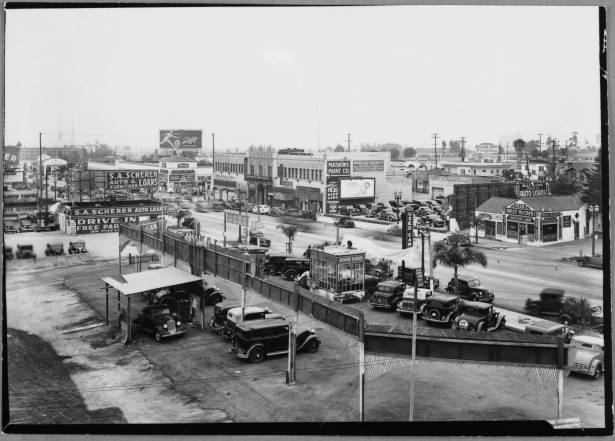 Circa 1937. A used car lot occupied the Vine Street side of the former Famous Players-Lasky studio between Sunset and Selma. Carpenter’s drive-in sandwich stand is at the northeast corner of Sunset & Vine. Huntington Library digital.

In September 1937, the owner of a rival drive-in restaurant across the street on the southeast corner of Sunset and Vine (6290 Sunset) had the existing buildings demolished and removed. The following month, Carpenter’s applied for permits at 6290 Sunset. NBC was ready to start construction on its new home by the end of October 1937.

NBC’s new building opened quietly on October 17, 1938, without the fanfare that had marked the dedication of CBS’ Columbia Square down the street a few months earlier. In fact, several programs had already been broadcast from the new location.

The sprawling, modernistic building was designed by John C. Austin. It was tinted a shade of greenish blue to reduce the glare of the California sun and blend in with the blue sky and green palm trees. The terraces leading to the entrances were painted a darker green, with red cement floors. The exterior was bare of ornamentation except for aluminum strips on the rounded corners, and the illuminated metal NBC signs, and magenta-lighted neon tubes parellelling the terrace on Sunset. The 3-story lobby, which linked the offices to the 8 broadcasting studios, was illuminated by  40-ft floor-to-ceiling glass brick panels and diffused with a warm orange light in the evenings. 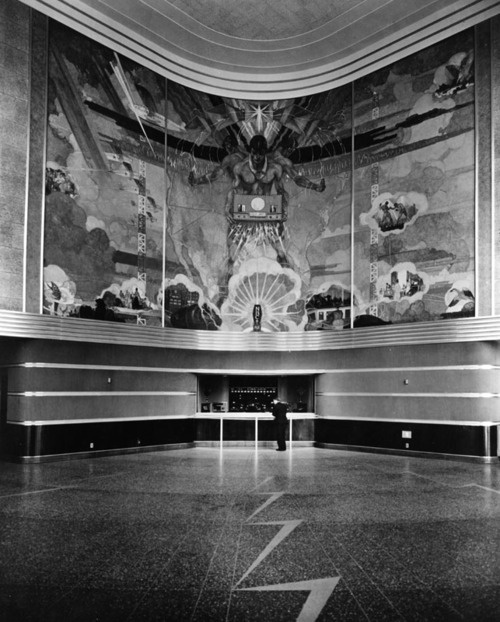 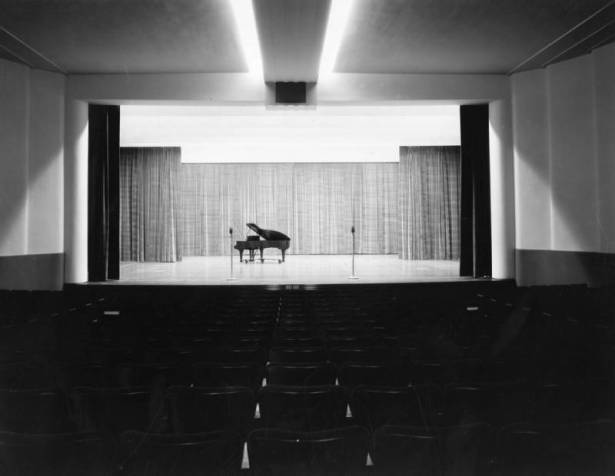 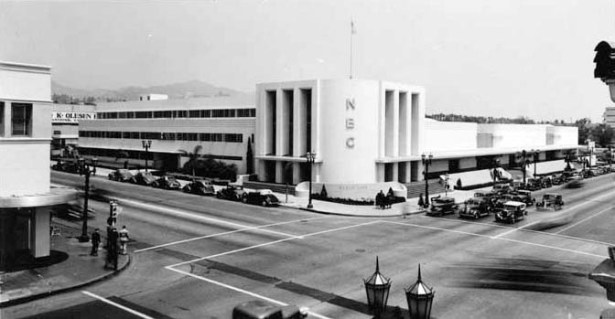 Across the intersection of Vine. LAPL

Looking north on Vine from Sunset at night. Note the orange glow and the illuminated glass brick panels.

Unlike the film studios, which rarely admitted the general public and kept a tight rein on visitors during filming, the radio studios became a popular tourist destination in Hollywood both for tours and for fans attending broadcasts. The networks were quick to capitalize on this idea with quiz and audience participation programs like NBC’s “Can You Top This,” “It Pays to be Ignorant” and “Double or Nothing.”

Crowd waiting on the Vine Street side to get in to NBC. LAPL.

Crowd waiting outside the Sunset side of NBC c. 1944. LAPL.

Anyone in the vicinity of sunset and Vine was potential fodder for a radio quiz program stunt.

By the late 1940s, like CBS down the street, NBC was struggling to find the room to expand its television operations. As it had in the early days of radio’s westward expansion, NBC leased theaters around town for extra space. In October 1948, the station was getting ready to house NBC’s western television headquarters and for KNBH, which was already showing an experimental test pattern on Channel 4, to be on the air soon. On January 16, 1949, KNBH Channel 4 began broadcasting in Los Angeles. Signage was added to the facade of NBC at Sunset and Vine. 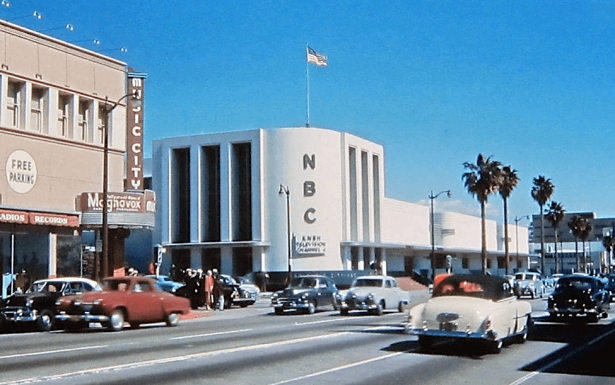 By the fall of 1951, NBC was building its own television studio in Burbank, which opened in October 1952. An addition specifically for color television, called Color City, was dedicated in March 1955. NBC still had plenty of use for its Sunset and Vine studio. In 1961, however, the studio announced that by 1963 it would consolidate its operations in Burbank and began shopping the Sunset and Vine property to potential buyers. In March 1961, NBC reported that it was negotiating with developer Lionel Hayes Uhlmann to sell the parcel for $3.5 million. The developer was proposing to build a 3-skyscraper hotel-office complex on the site after NBC departed in 1963.

NBC did depart in 1963 as planned and begininning in May 1964, the 26 year-old radion/television studio was demolished. But the skyscraper development never materialized and the property’s new owner, Home Savings and Loan, had no plans for developing the vacant site.

The property sat vacant for almost 4 years. Home Savings & Loan ultimately built its own headquarters on the site. The 2-story structure, addressed as 1500 N. Vine, opened in June 1968. In recognition of the site’s importance in Hollywood history, it features a mosaic mural, “The Golden Role of Stars” by Millard Sheets, and a stained glass window by Susan Hertel depicting famous chase scenes. Out front is a fountain with a 1920s sculpture by Paul Manship, the Flight of Europa. The building is currently a Chase Bank. 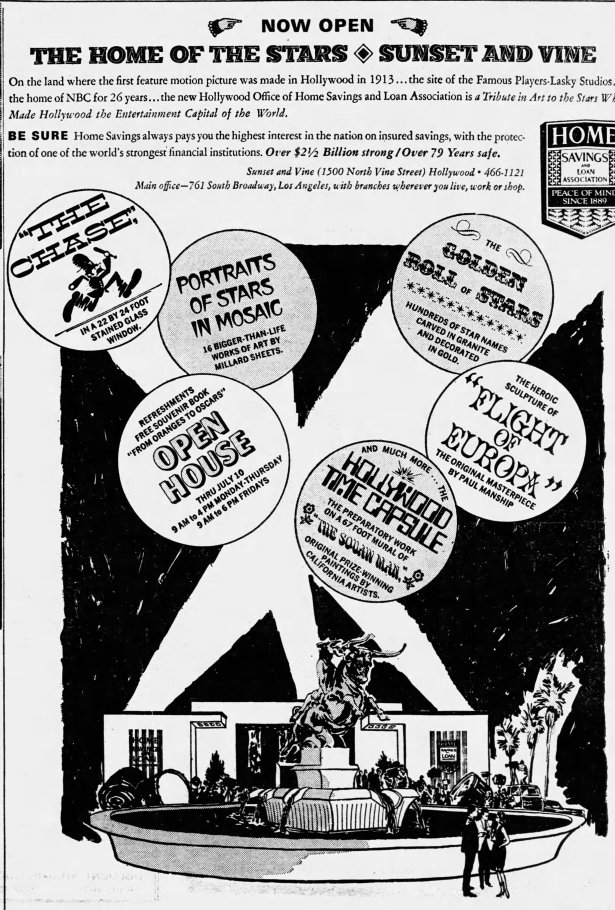 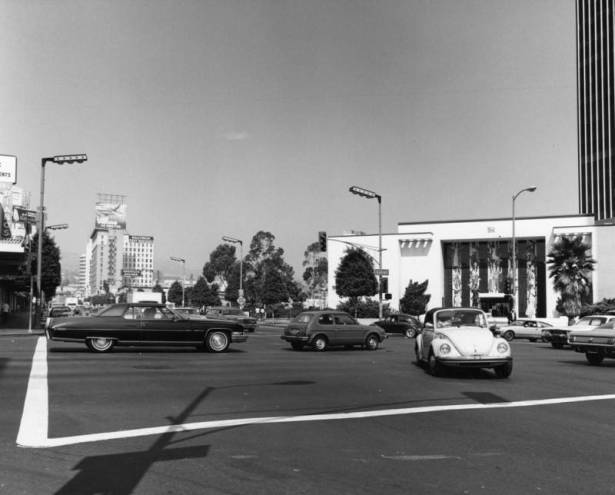