Located on the northwest corner of Sunset and Vine and alternately addressed as 1501 Vine Street, this property belonged to retired toy air rifle manufacturer William F. Markham and his second wife Carrie. The Markham home was located near the southwest corner of the same intersection; Marham had built the Markham Building at 6372 Hollywood Boulevard at Cosmo Street in 1918 and also had numerous rental properties.

In June 1925, it was announced that a local syndicate, the Hollywood Holding Company, had made a deal with Markham for a 99 year lease for the northwest corner extending West to Morningside Court and would build a 900-seat movie theater and a 20,000 square foot ice rink on the site. The LA Times published a sketch of the building, which was designed by architect John M. Cooper. The project never went forward.

A sketch of the never-built theater and ice rink designed by John M. Cooper. 6/7/1925 LAT.

In April 1926, local papers again reported that the northwest corner had been leased, as had- seperately the southwest corner (which became the Hood Building), for 99 years to investors who were to construct a building on the site.

This is how real estate worked in Los Angeles. Early residents lucky enough or rich enough to aquire land holdings rarely parted with it. When newspapers report a building being sold, most of the time, what that really meant was that the lease had been sold. The leaseholder would agree to improve the property with a building and put up all the money for the investment. Likewise, if the leasee defaulted on the lease or breached its terms, the entire property (including the improvements) reverted to the owner of the land. Relatives of these pioneers never had to do anything. They just held on to that land and collected the checks. (That is, unless the relative was stupid enough to sell off the properties to gamble with the cash, and then lose that too. Thanks, great-grandpa).

The leaseholders, Vine and Sunset Realty Company, also had to agree to move dwellings located on the parcel, which was accomplished. In September 1927, the investors announced plans to immediately build a two-story commerical building on the site that would contain 14 stores on the ground floor and 30 studios or offices on the second floor. Architect Charles F. Plummer designed the structure in a fanciful Spanish Baroque/Churrigueresque style, back when Sunset Boulevard still thought it was doing Spanish Baroque/Churrigueresque.

The building was completed in January 1928 and its anchor tenant, Western Auto Supply opened up shop, moving from its existing Hollywood location since February 1926 at 6327 Hollywood Boulevard in the Guaranty Building.

Western Auto erected a huge animated electric (not neon) roof sign consisting of over 750 light bulbs. A series of rockets would appear, burst, and center on an arrow pointing to the front entrance of the business. 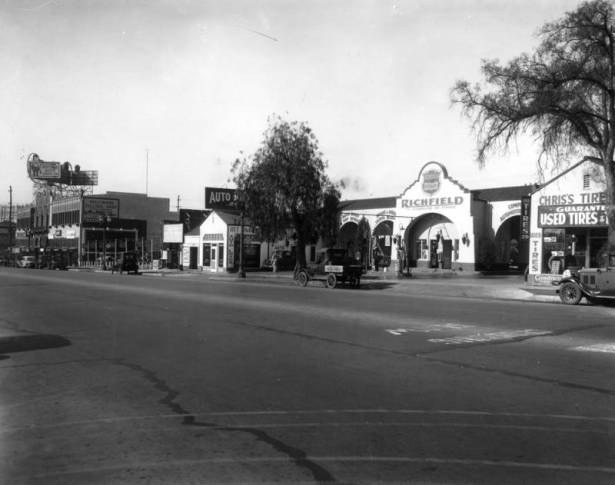 The 1500 block of Vine Street in 1928, showing Western Auto on the northwest corner. LAPL.

Detail from the above photo.

Western Auto remained here into January 1937. Then they and their roof sign were gone.

Detail from the above photo. Western Auto and its roof sign are gone.

On January 30, 1937, the leasee having defaulted on the terms of the lease, ownership of the building reverted to the land owner. In this case, the widow of William F. Markham. Markham had passed away in April 1930. Carrie Markham, though nearly 30 years his junior, herself passed away in August 1937. The estate, worth more than $2,000,000, had been in litigation at the time, brought by Markham’s daughter from his first marriage. She’d lost the suit in 1936, but appealed. and lost again in 1937, appealed to a higher court and again lost in 1940.

The property meanwhile, sat largely vacant for most of 1937, 1938 and 1939. In October 1938, the Markham estate spent almost $13,000 to makeover the building with help from architect Kemper Nomland in the new streamline-moderne style, in keeping with the new look of this section of Sunset Boulevard- the style set by CBS’ Columbia Square, which had opened a few months earlier, the just-completed NBC’s Radio City across the street, and Earl Caroll’s nearly finished theater restaurant. The estate spent another $15,000 on upgrades to the main corner storefront for it’s supposed San Francisco tenant who never materialized.

It was in July 1940 that the building got a new anchor tenant: Wallichs. Father and son Oscar and Glenn Wallichs had operated a radio and home appliance store on Ivar Street for 10 years before moving to this high-profile location. They renamed the new business Music City (being across the street from NBC’s Radio City). The Sunset and Vine store would continue to sell home appliances, radios, phonographs, records, sheet music, and recording equipment. In addition, it would offer free rehersal studios, having joined forces with the Hollywood House of Music recording studio, formerly of 5205 Hollywood Boulevard. The 3-day opening celebration began July 10. 1940. 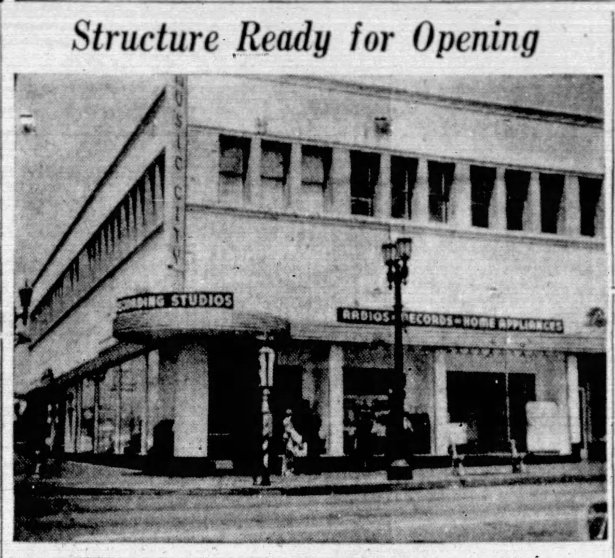 With neighbor NBC broadcasting television to LA over KNBH as of Janaury 1949, Wallichs highlighted its television department at the “television corner.”

Wallichs c. 1949. At left is the Hood Building. Temporary signage on the top curve of the NBC building. LAPL

In 1960, the building was given another face-lift for a more space-age appearance.

The 1960 facade. Detail from a larger postcard view.

Wallichs remained here for 37 years. The building that currently occupies this site is modern.