This block, on the north side of Sunset between Cahuenga and Morningside Court was owned by Jacob Muller and later his sons Frank and Walter.

On December 28. 1902, the LA Times reported that “J. Muller has a commodious frame building nearly completed on Sunset Boulevard to be used as a butcher shop.”

Before 1931, Ivar Street had terminated north of Hollywood Boulevard. After it was extended through to Sunset Boulevard, it cut through the Muller property between Cahuenga and Morningside Court.

The first “Muller Bros.” operated at what became the northeast corner of Sunset and Ivar) as a fuel, feed & fertilizer yard, in 1916, addressed initially as 6371, then as 6367. Hollywood Fuel and Feed moved here (now as 6367) in 1919 from its previous home on Cahuenga. The brothers opened their auto service business across the street at 6380 Sunset the following year.

Jacob Muller built the 2-story wood frame structure here in 1907. As was typical, it housed stores on the ground floor and apartments above. It was addressed variously at times as 6367 Sunset or 6365-6367 Sunset.

Ad for the Blue Bird Chop Suey Parlor, 6365 Sunset. 7/8/1921. It’s “just east of Cahuenga” because Ivar did not yet extend to Sunset Boulevard. Hollywood Citizen-News.

The Blue Bird was reportedly full of Hollywood film stars and “other patrons” when it was raided on October 26, 1921 on orders of Hollywood Division Chief of Detectives George K. Home. His detectives reportedly found booze being served in tea cups, just like in the movies, and charged the manager, T. Hadaka, with violation of the Gandier Ordinance- the Los Angeles city prohibition on alcoholic beverages that predated national prohibition.

The Blue Bird kept a lower profile after that. In May 1927 it “reopened” under new management. It operated through 1931 at least.

From Thanksgivng Day 1931 to early 1932, the Hollywood Puppet Theater, operated by artist Ruth Monro Augur, operated in one of the Muller buildings here, addressed as 6363 Sunset. Augur had puppets resembling famous film stars such as Marie Dressler, Will Rogers, Douglas Fairbanks, William Powell, Joe E. Brown, and Greta Garbo. An Ann Harding puppet served as MC of the show. Starting in the Fall of 1932, Augur toured with the Marionettes and did not reopen the puppet theater here. 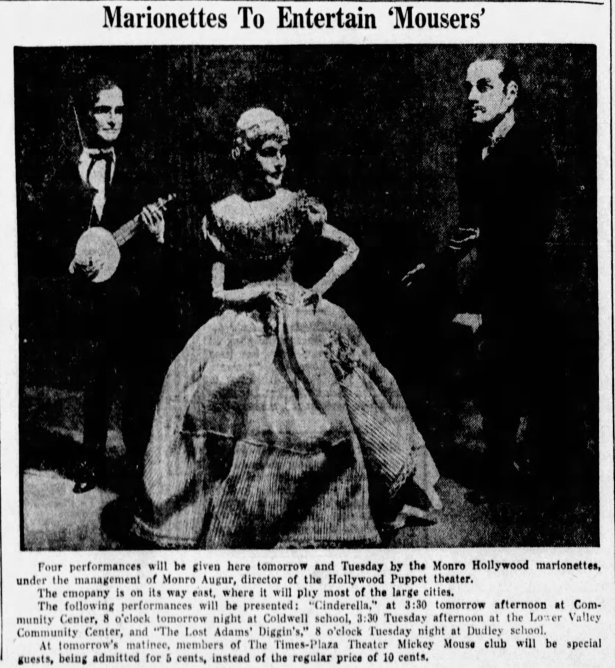 6361 Sunset is another contender for Building No One Ever Took A Picture Of On Purpose.

In October 1926, it was announced that Mrs. Mae Cooley, who ran the Romaine Cafeteria on Western Avenue and was in need of larger quarters, had leased the ground at this location and that the Muller Brothers would construct a new building here for her use. Walter Muller confirmed the news in November 1926. Cooley’s Sunset Cafeteria opened at 6361 Sunset on January 23, 1927. 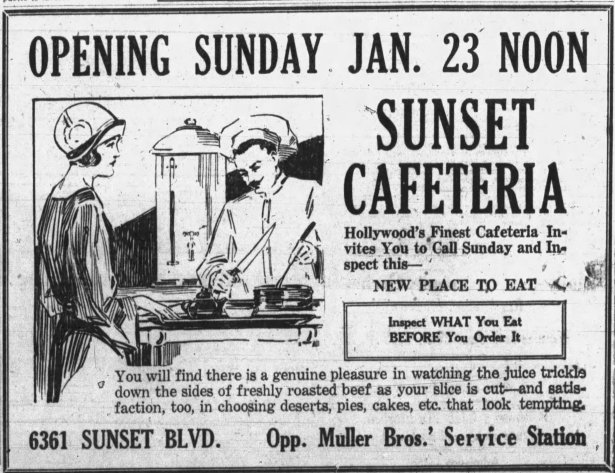 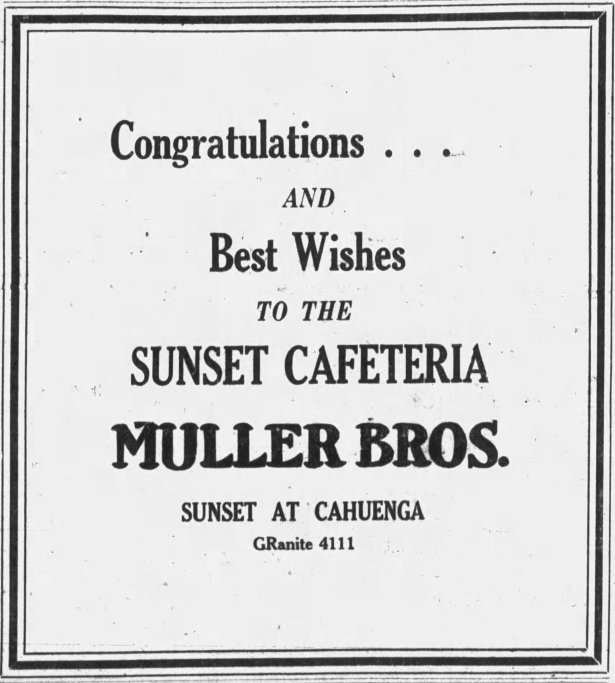 Muller Brothers congratulate their new tenant. It’s “Sunset at Cahuenga” because Ivar did not yet extend to Sunset. 1/22/1927. Hollywood Citizen News. 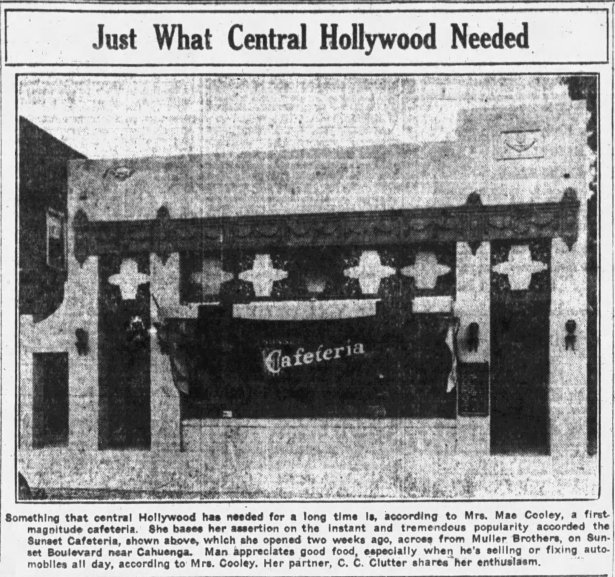 In February 1929, Cooley leased a new space on Western Avenue- 616 N. Western Avenue- and had it converted for use as a cafeteria. By July 1929 6361 Sunset had become Kalil’s Cafeteria. Said Abu “Sidney” Kalil had come to the US from Turkey according to his naturalization papers. He worked as a busboy for the Childs restaurant chain in New York, working his way up to exexutive management. When Childs bought the Los Angeles Boos Brothers cafeteria chain in February 1927, Kalil came West to supervise the transition before deciding to launch his own restaurant here. Kalil also took over Cooly’s space at 616 N. Western. 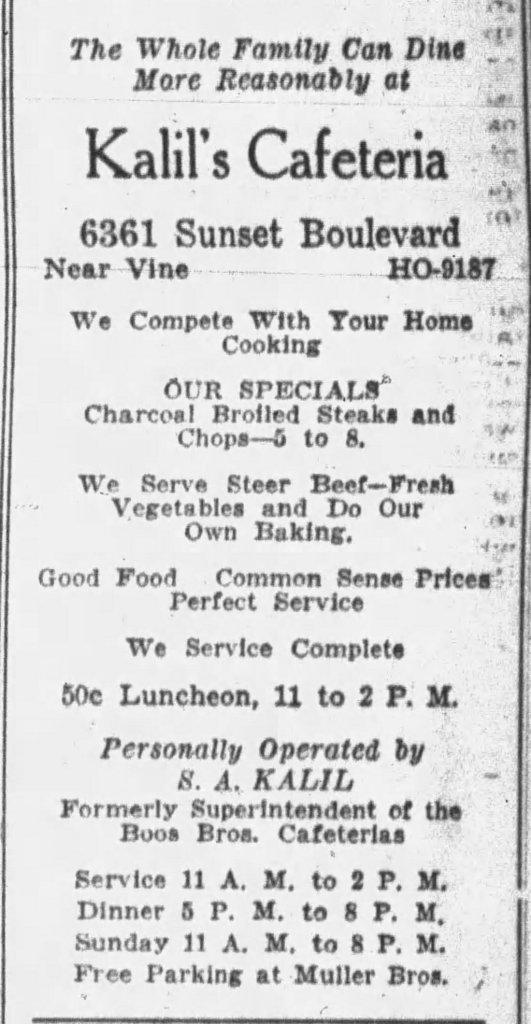 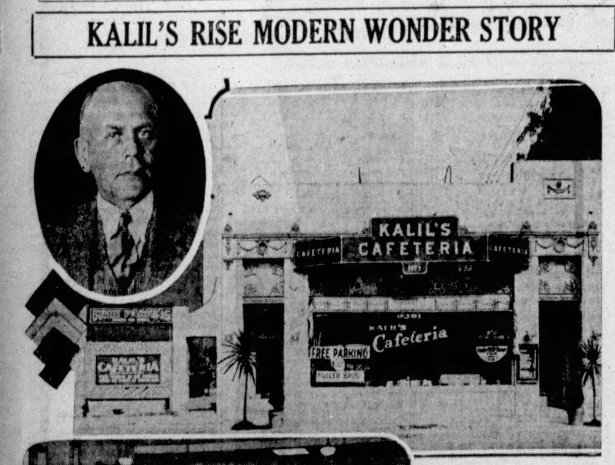 In September 1933, the Hollywood Citizen-News reported that “rotund Frieda and Charlie” were operating their charming Hofbrau Garden at this address. Though national prohibition was still in effect for hard liquor, President Roosevelt had legalized beer sales in March 1933. Hofbrau Garden (sometimes spelled Hofbrau Gardens or Hof-brau Garden) was advertising lunch and dinner by March 1934 with dancing and music. The singing waiters of the Haufbrau Quartette were popular on local radio.

With Europe at war with German, Hof-brau Garden was “A Swiss Establishment.” 11/23/1938. Hollywood Citizen-News.

Having survived the Depression and World War II, Haufbrau Gardens closed in October 1945. THe fixtures were sold at auction December 18, 1945.

Another restaurant briefly took over this space, The Rotisserire, opening in July 1946.  The signage shown in the ads was actually at its second Wilshire Boulevard location in Beverly Hills. Even skating bartenders couldn’t save the place. The Rotisserie closed at 6361 by April 1947, with 9 years to go on its lease. 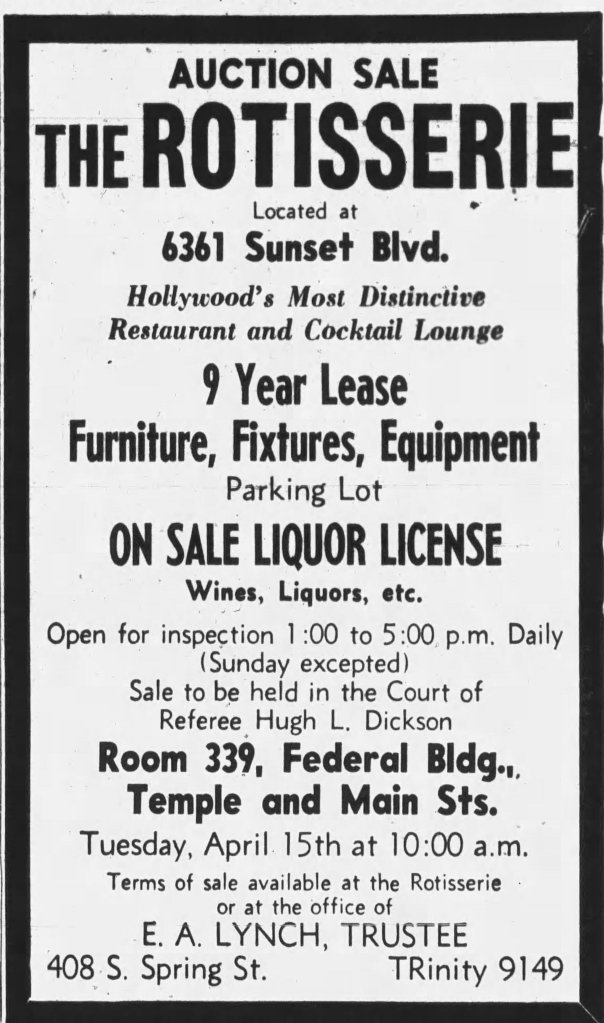 Walter Muller died in January 196q. In August 1962, surviving Muller brother Frank and RCA announced that RCA planned to build a high rise building on the parcel, to be addressed as 6363 Sunset. Demolition of the existing strucres was already underway. Ground-breaking for the new RCA building, designed by Albert C. Martin and Associates, was held on January 3, 1963, The completed building opened in April 1964.