Brothers Frank and Walter Muller’s expansive automobile service business was at 6380 Sunset Boulevard on a 5-acre parcel that the brothers later told reporters their father Jacob had purchased in 1893 for $1500. It extended from Sunset to DeLongpre Avenue and along the south side of Sunset Boulevard from Morningside Court on the east to Cahuenga Boulevard on the west, as Ivar did not yet cut through Sunset.

Born in Germany, Jacob Muller married Minnie Altman in Los Angeles in October 1891. Walter was born in August 1892 (per the 1900 census; his WWI draft registration has it as 1893), Frank in October 1895. There was also a Muller sister in between- Florence. Jacob also owned a parcel across the street, where in the late teens Frank and Walter, as “the Muller Bros.” ran a fuel, feed and fertilizer business. 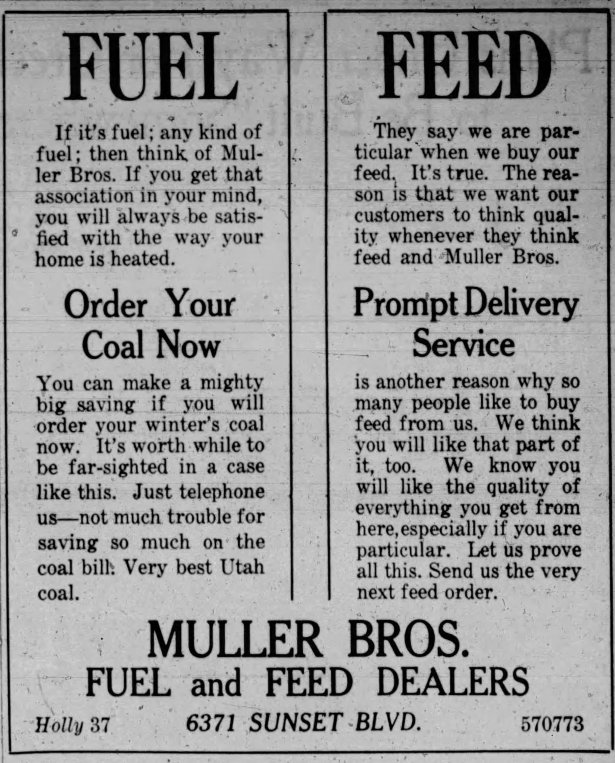 After Army service during World War I, the brothers changed tp fueling a different kind of horsepower: the automobile engine. Their gas and tire business opened at 6380 Sunset in early 1920. 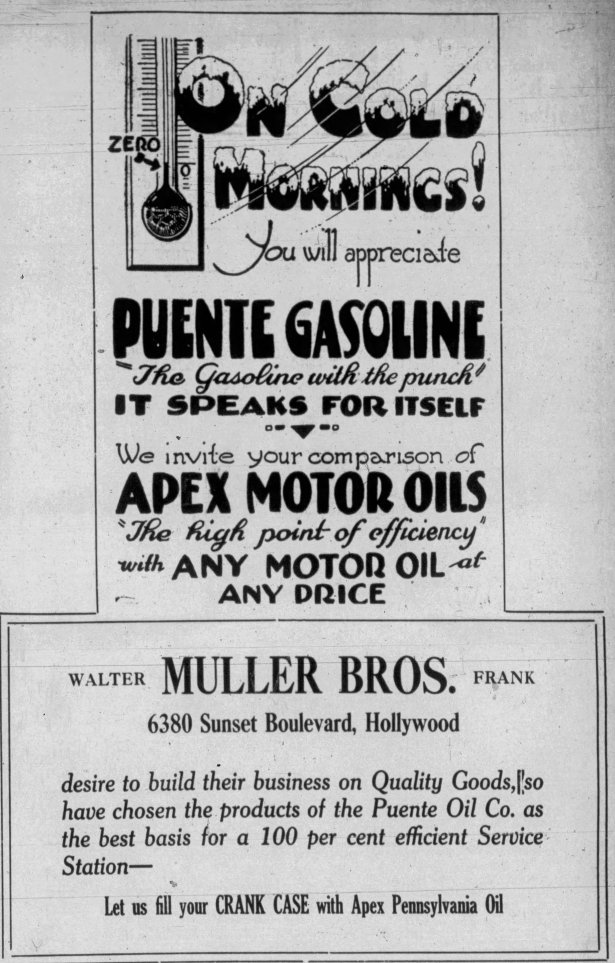 By December 1920 they had expanded to include other types of auto supplies, accessories, and service and officially declared the business as the Muller Bros. 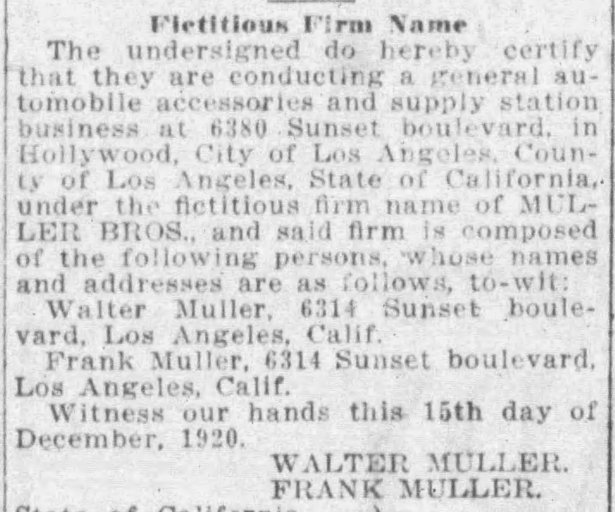 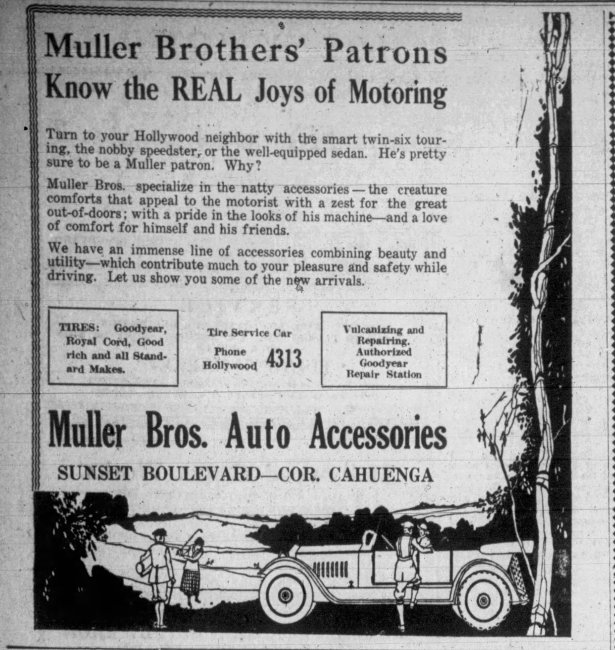 In less than two years of operation, they had expanded from the corner of Sunset and Cahuenga to a sprawling complex occupying 3 of the 5 acres and employed 35 men. In 1922 they were already the (albeit self-proclaimed) “World’s Greatest Service Station.” Services offered included a moter lubrication department, a washing and polishing service, a headlight testing station, and a tire vulcanizing department. They also had a service car that could be deployed to help stranded motorists. 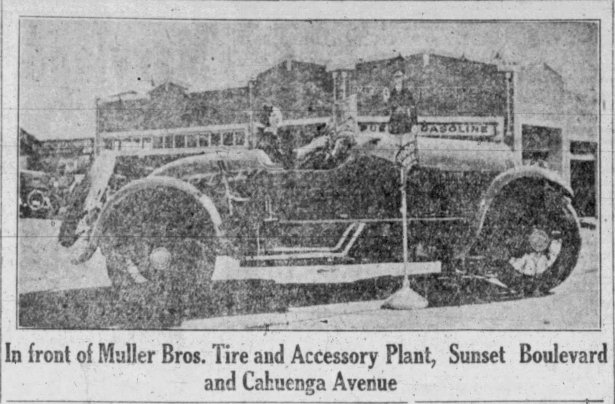 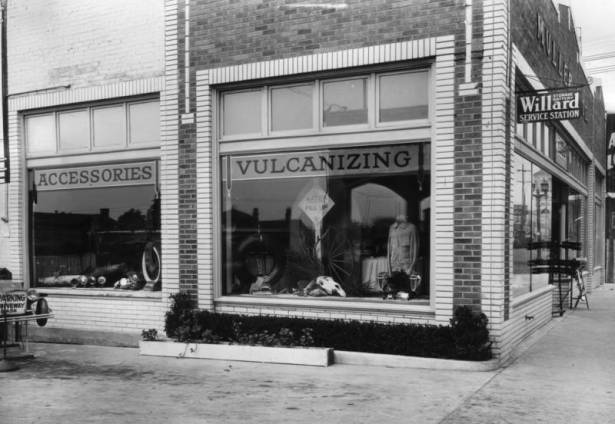 The brothers’ employees really put the SERVICE in Service station. 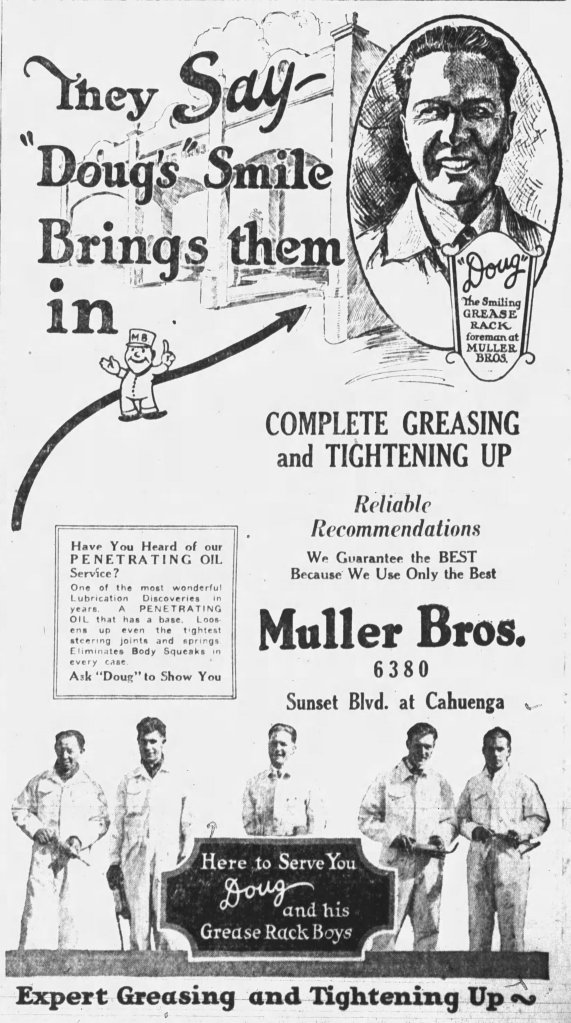 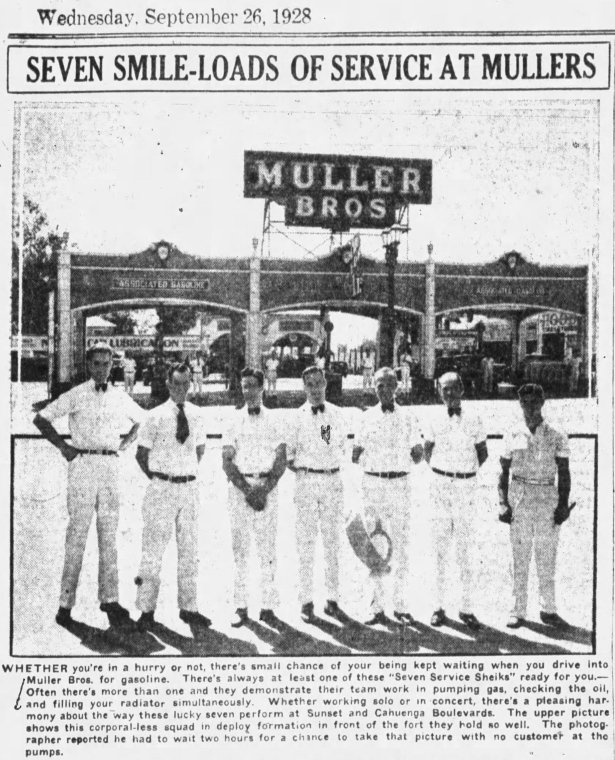 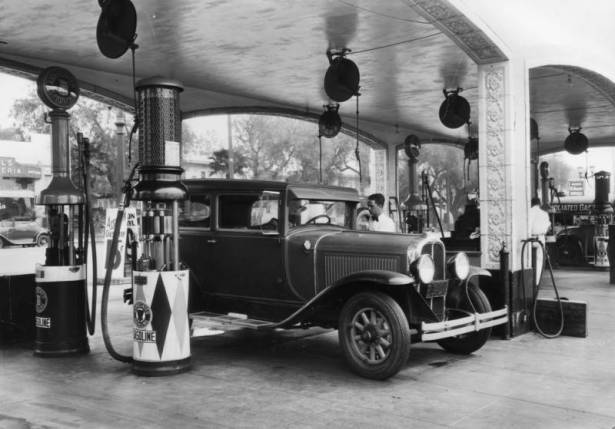 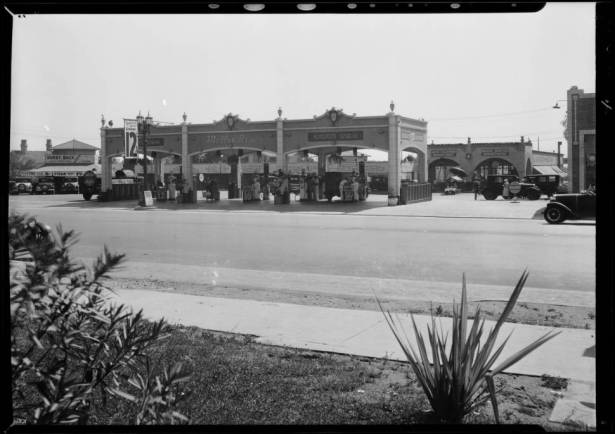 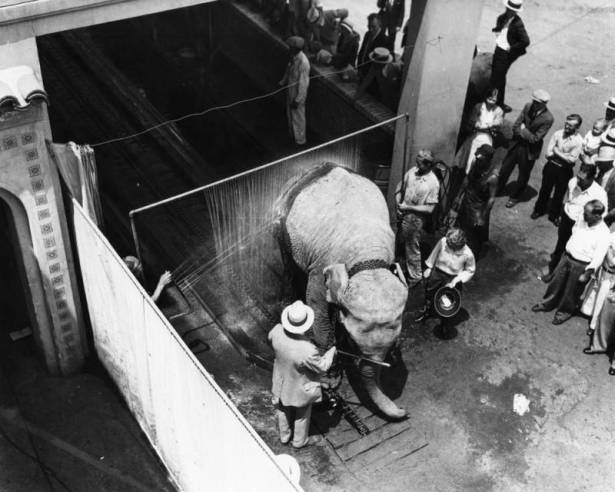 Exploiting a beautiful elephant to promote the new car wash aka auto laundry, 1931. The elephants were appearing in a Franchon & Marco stage show at the Hollywood Pantages. LAPL. 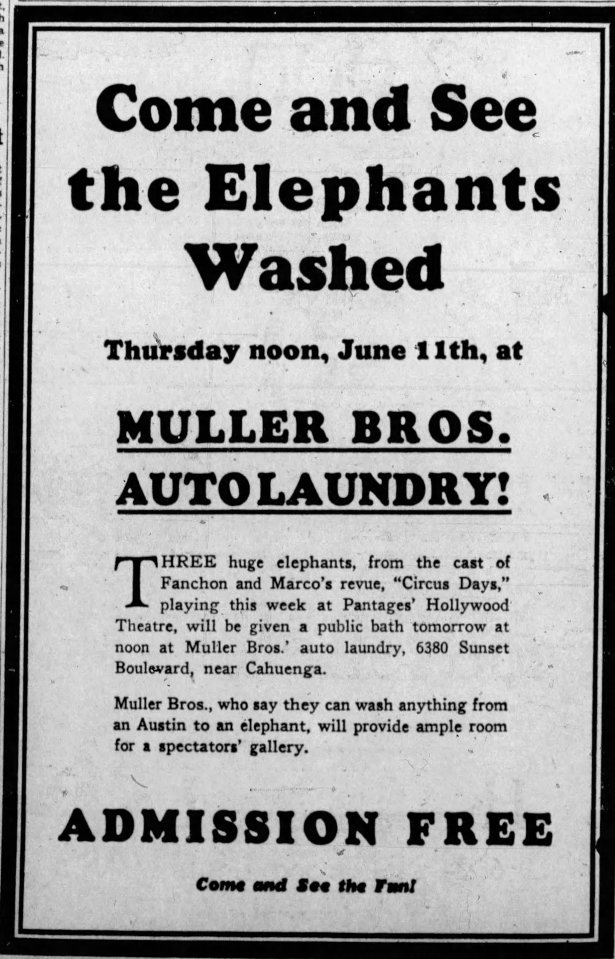 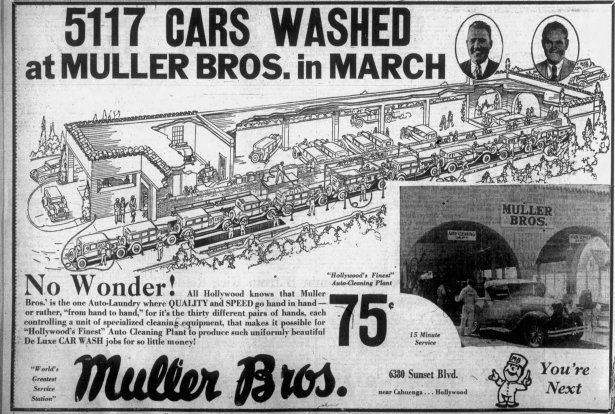 In February 1936, the firm, which now had 125 employees, announced it was undertaking a modernization, with new structures designed by architects Douglas Hull McLellan and Allen McGill in the streamlined style, inspired by the 1933-1934 Century of Progress World’s Fair in Chicago. The first unit of the project, the lubrication shop, was completed in March 1937. A few other structures, including a modern gas pump station, were indeed built but several Spanish-Italian tile roof buildings, such as the car wash, remained to the end. 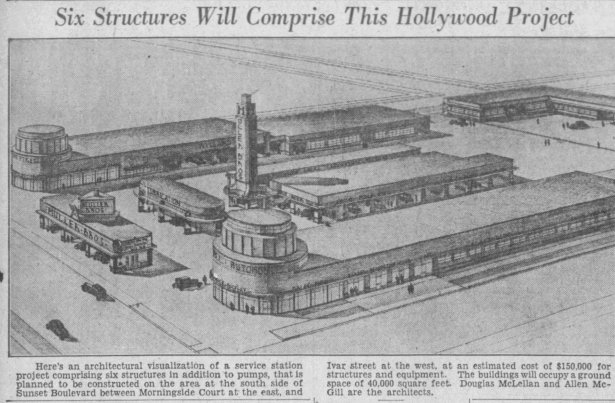 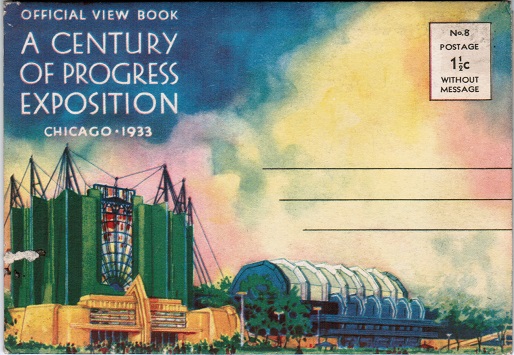 With the modernized lubrication shop from the corner of Sunset and Morningside Ct. 3/10/1937. Hollywood Citizen-News. 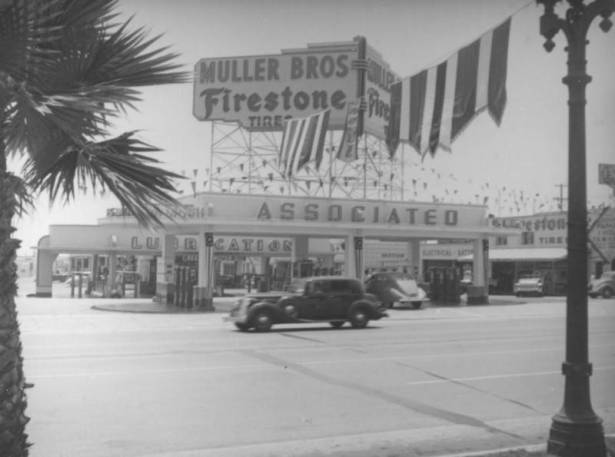 With gas and tire rationing introduced during World War II and manufacture of new autos halted for the war effort, the Muller Bros. offered services essential to keeping your old car operating. They also began selling some non-auto related products and, in late 1943, used cars. 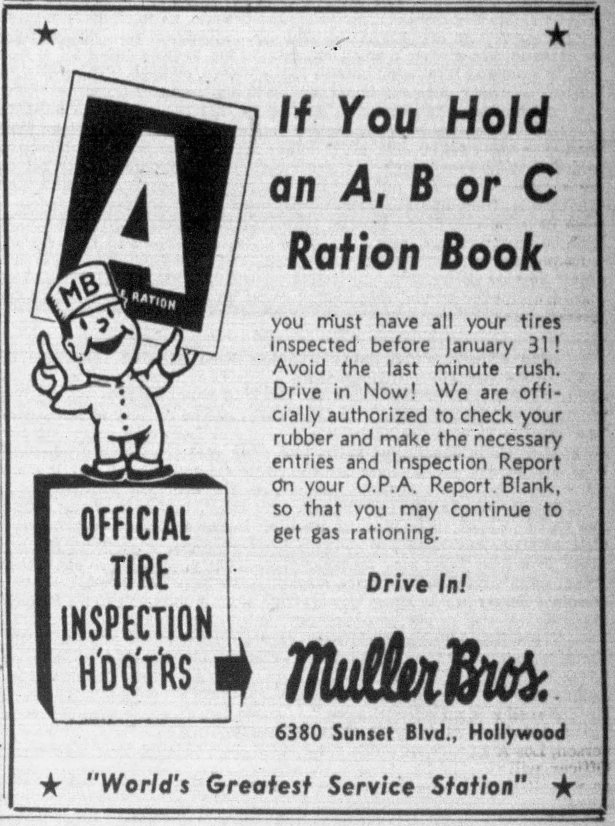 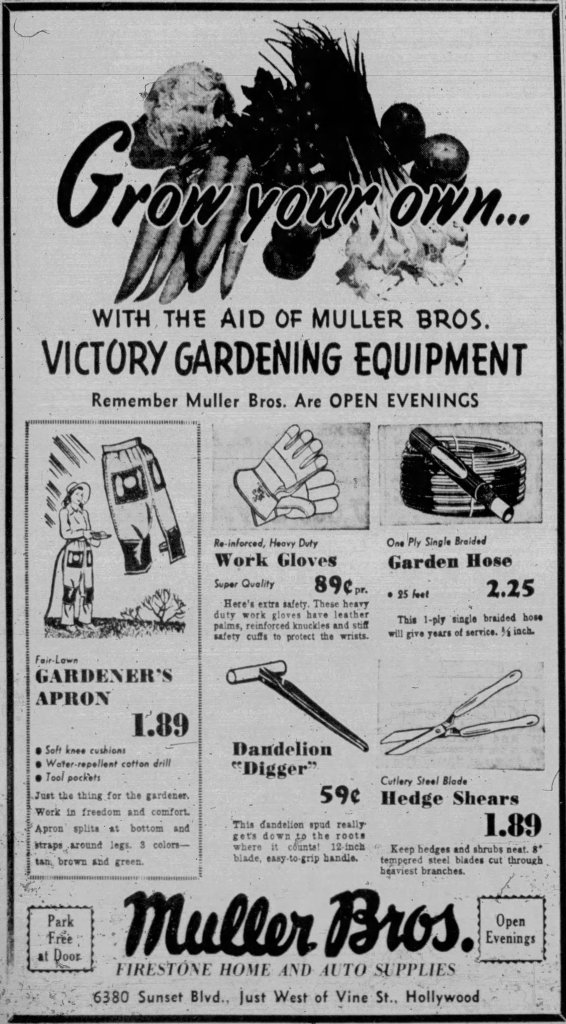 After the war, the business kept rolling along. The Mullers continued to sell home appliances in addition to automotive accessories, expanded the used car lot on another Muller-owned parcel in the 6400 block of Sunset, and added a U-drive car rental service. As of 1952, they had 150 employees. 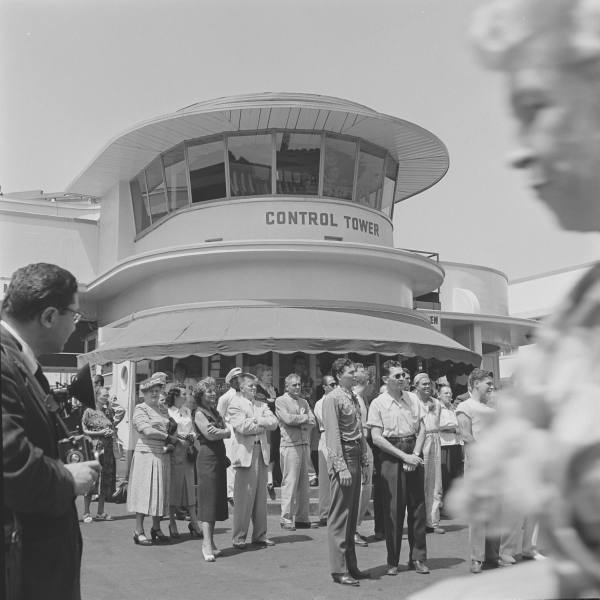 The “airport type control tower” (part of the 1916 modernization) acted as the “nerve center” of the complex. June 1951 for Life Magazine. 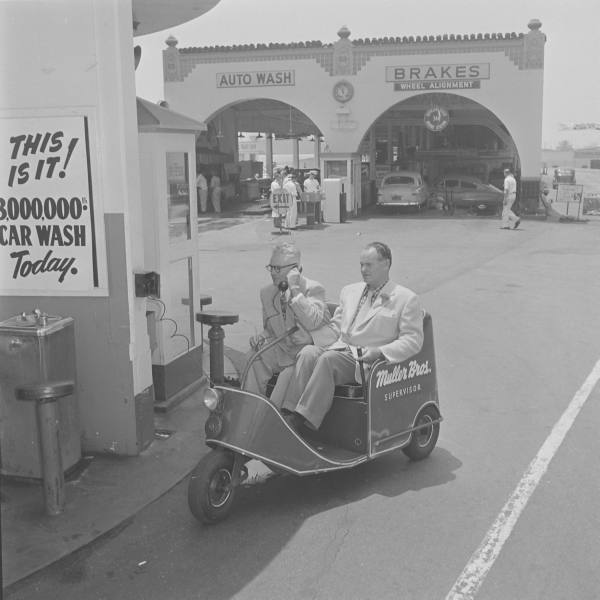 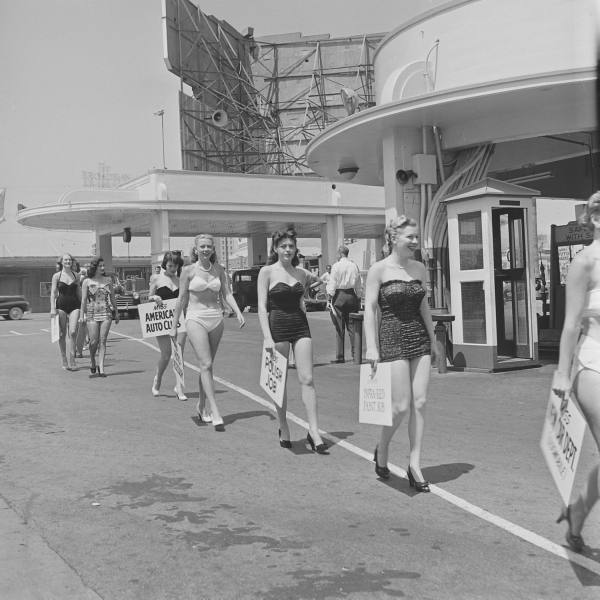 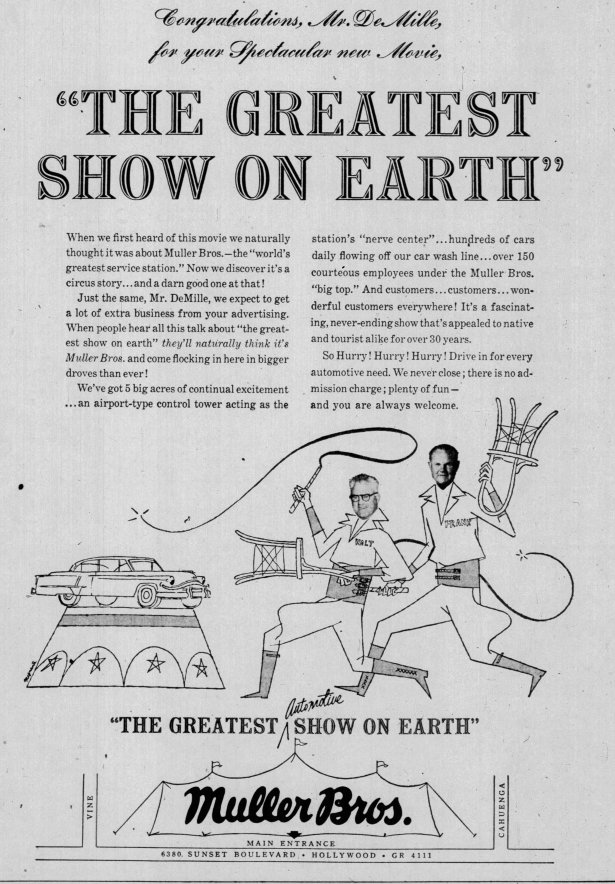 Walter Muller died in January 1961. In August 1961, Frank sold the 5-acre property to a New York firm for an undisclosed amount. Muller Bros. service station closed on August 31, 1961. An auction of the fixtures and equipment was held October 3, 1961. 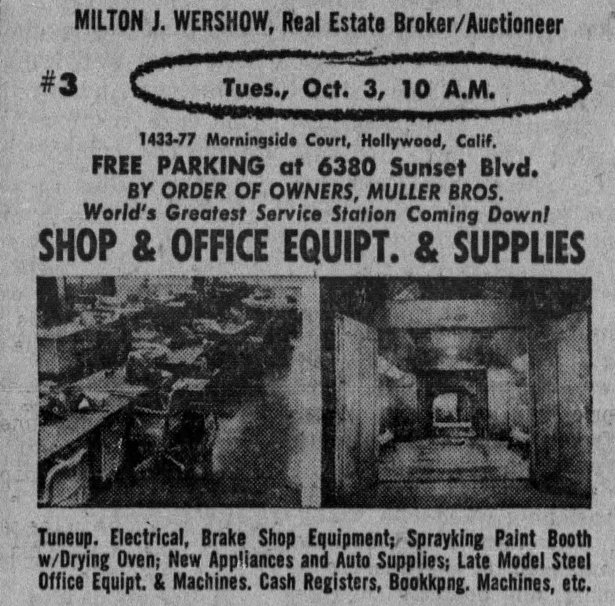 Pacific Drive-In Theaters constructed a geodesic dome theater on the site, the Cinerama Dome, that would be addressed as 6360 Sunset Bouevard. A ceremonial ground-breaking was held in April 1963 with stars of It’s A Mad, Mad, Mad World, the film that was to inaugurate the theater at its opening in November. 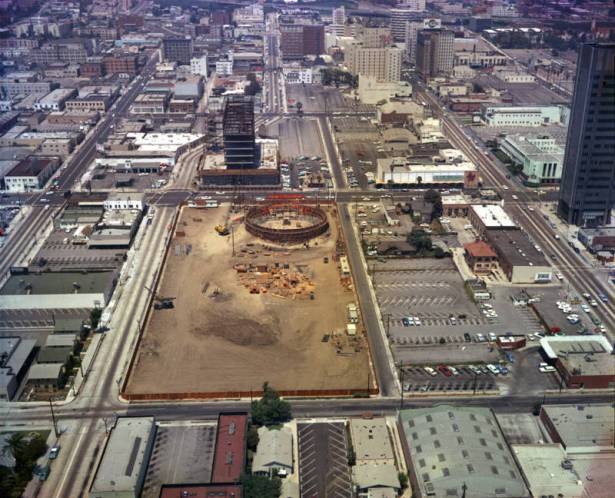 Construction of the Cinerama, looking north. The RCA building is being on the other former Muller parcel across the street. LAPL. 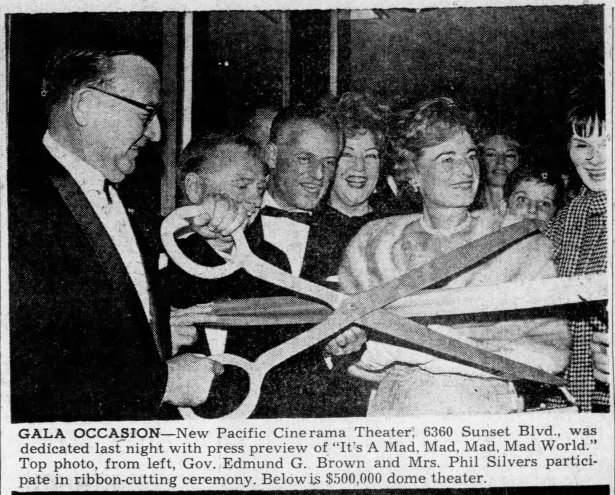 Governor Brown and Mrs. Phil Silvers perform the ribbon cutting ceremony at a press preview of It’s a Mad, Mad, Mad World at the Cinerama Dome on November 3, 1963. 11/4/1963. Hollywood Citizen-News. 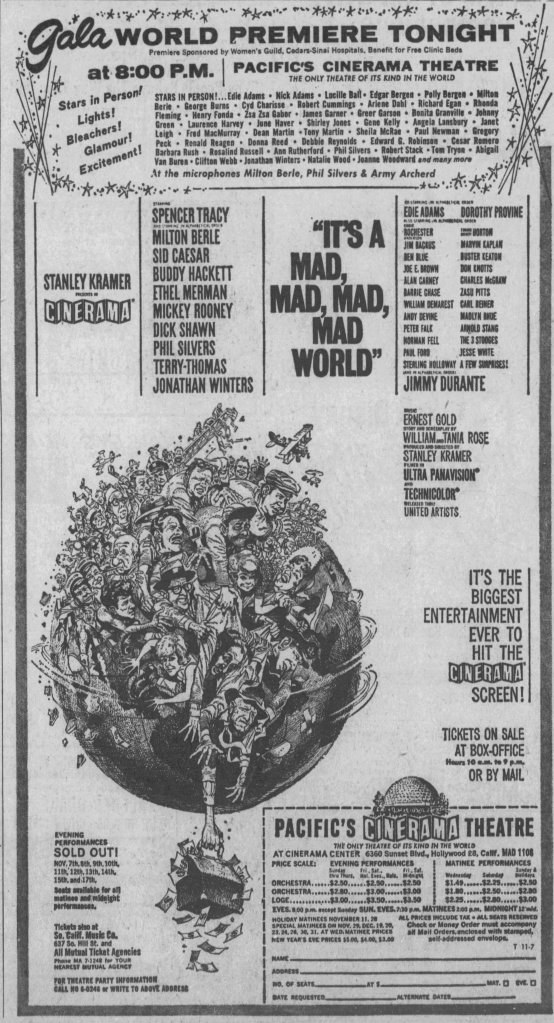 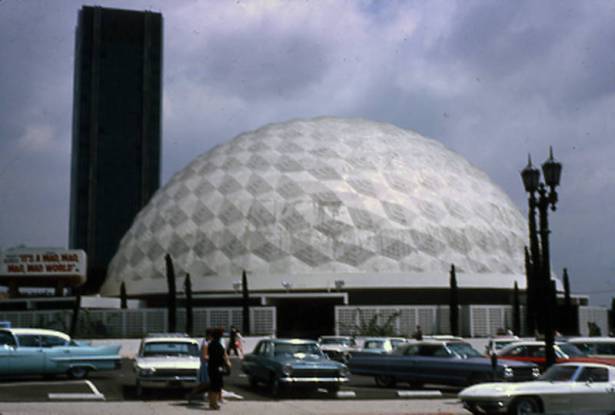 Cinerama Dome during the run of It’s A Mad, Mad, Mad World. The new Sunset-Vine Tower, built on the site of the second Sunset & Vine Carpenter’s drive-in, looms in the background. LAPL.