Mary Helen Kemp opened her first Sunset Boulevard tea room at the southwest corner of Sunset and Wilson on September 26, 1922.

Born in Wisconsin in 1869, Mary Helen Kemp had previously been a hostess at candy maker Betty Bolton’s tea room, which had opened at 1766 N. Highland in July 1921 before resigning to open her own place, not unlike James M. Cain’s fictional Mildred Pierce. 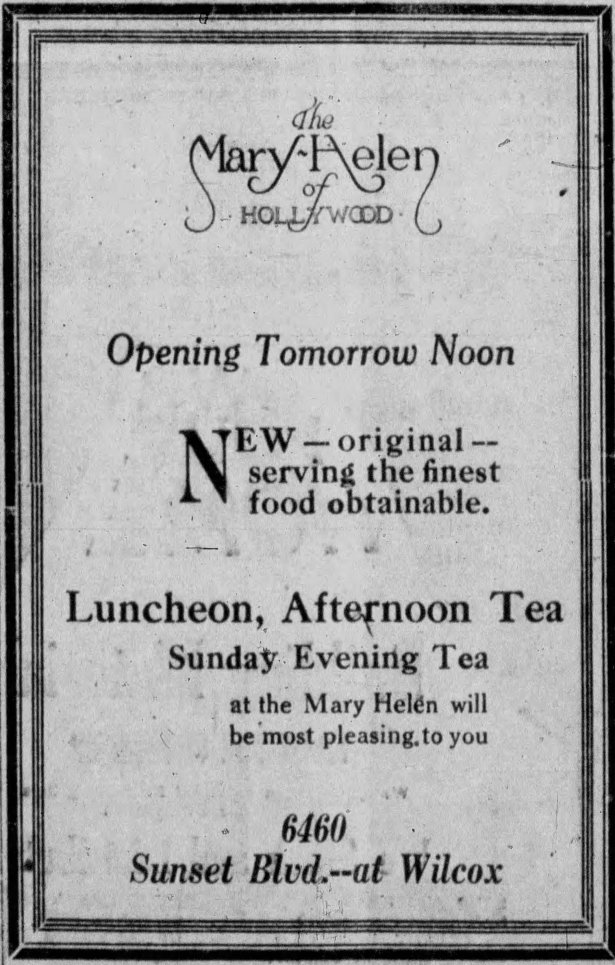 The tea room was situated in a bungalow, built as a residence in 1919. It could seat 28 persons. Within two years, Kemp was so popular that she leased a second bungalow on the lot. Connected by a covered walkway, the two spaces could hold 81.

Many of those who came were from the nearby film studios. Autographed photos of motion picture actors hung on the walls. Director Cecil B. DeMille, who worked at the Famous Players-Lasky studio at Sunset and Vine, reportedly planned his 1923 biblical epic The Ten Commandments at The Mary-Helen, lunching there nearly every day. Director Rex Ingram, who lived just down the street in a cottage at 6633 Sunset, likewise supposedly planned his 1923 film Scaramouche in Mary-Helen’s charming dining rooms.

Cecille B. DeMille (center) in 1923. From CecilBDemille.com.

At the end of October, 1927, Kemp closed the Mary-Helen at 6460 Sunset in order to prepare for a grand re-opening down the street at her new location at 6530 Sunset in the recently built Fred Thompson building.

The bungalow briefly held other shops such as Vionelle’s Wash Dress Shop.