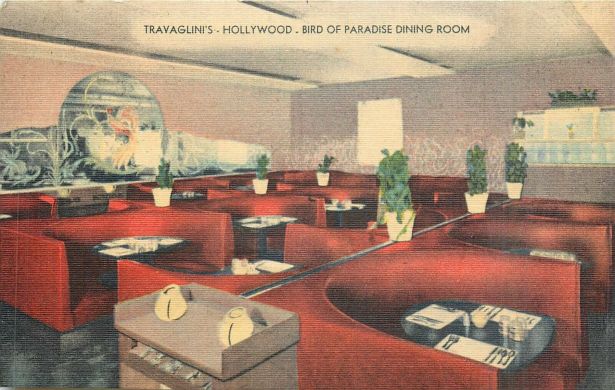 Located on the south side of Sunset Boulevard between Wilcox and Hudson, 6480 Sunset started out as an automobile showroom. The 1-story brick struture was built in 1923 and opened as the new home of H.W. Swanson’s Hupmobile dealership. 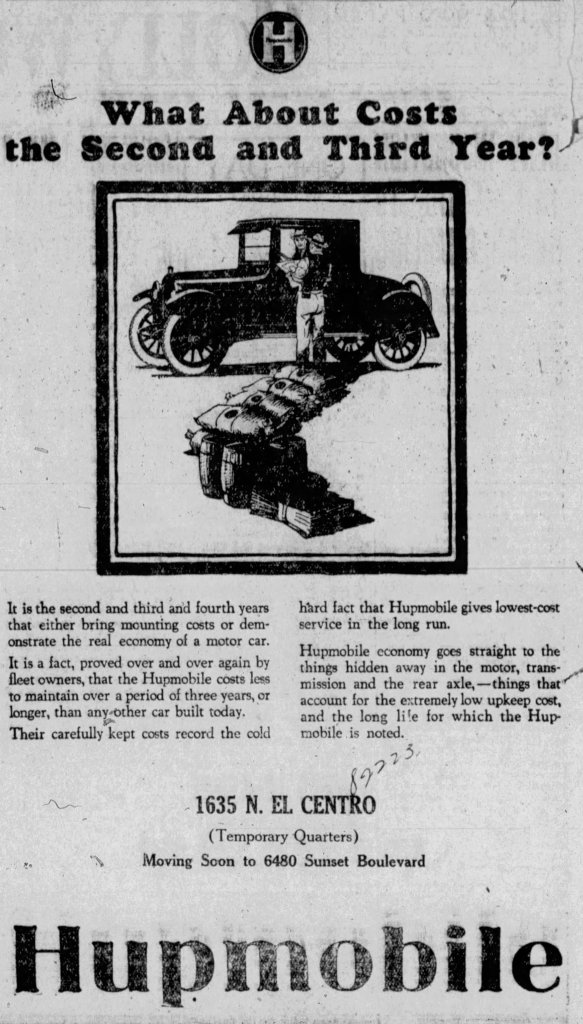 Swanson continued to sell Hupmobiles throughout most of the prosperous 1920s. In July 1929 he became the Hollywood dealer of a different luxury motor car, Pierce-Arrow. But Pierce-Arrows were a tough sell even in Hollywood post-Crash and by May 1931, Swanson was selling Graham-Paige autos and had given up 6480 to Walter Finney as of September 1931. 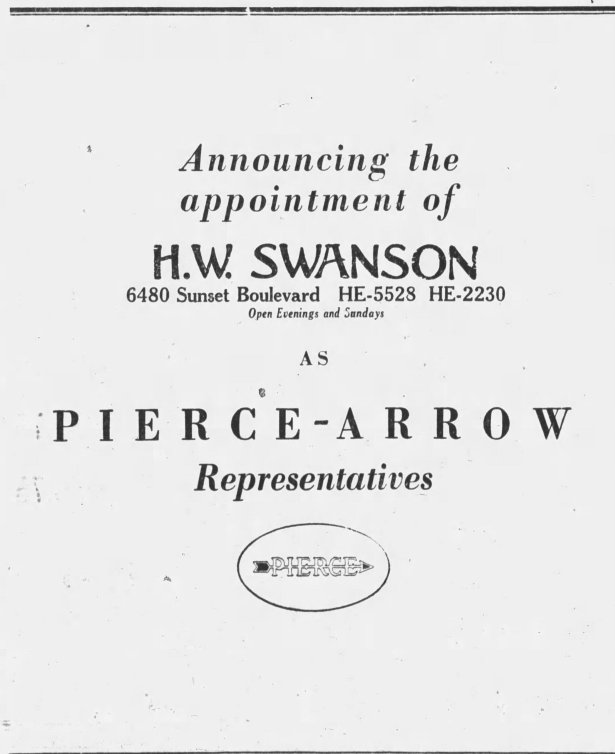 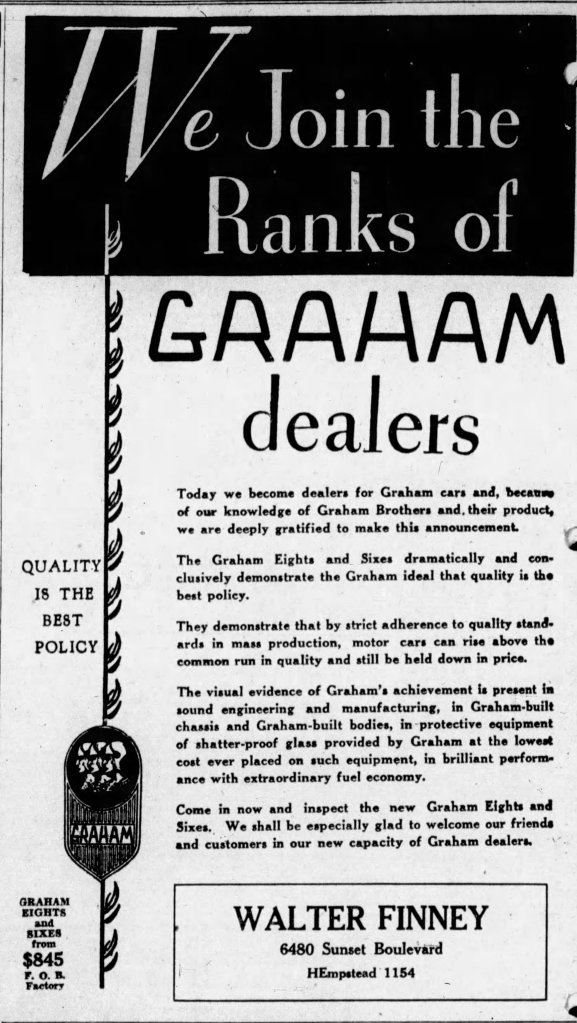 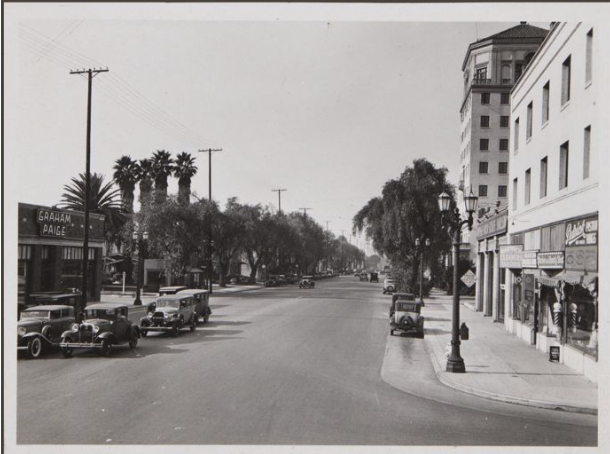 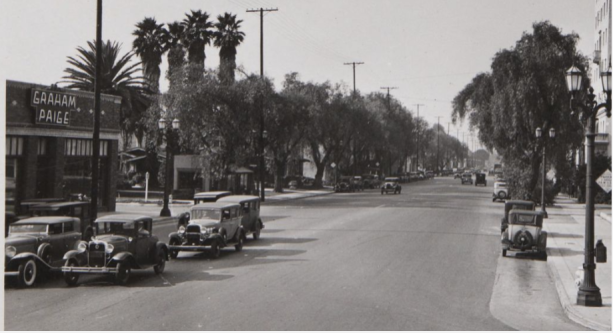 Detail from the above photo. This is the only image found of the exterior of 6480, another candidate for Building No One Ever Took A Picture Of On Purpose.

By early 1933, the building’s auto showroom days were over. In the summer of 1933 it briefly housed The Producers Showroom, a venue under the direction of Ethel Clifton for aspiring writers and actors to showcase their talent, or lack of. 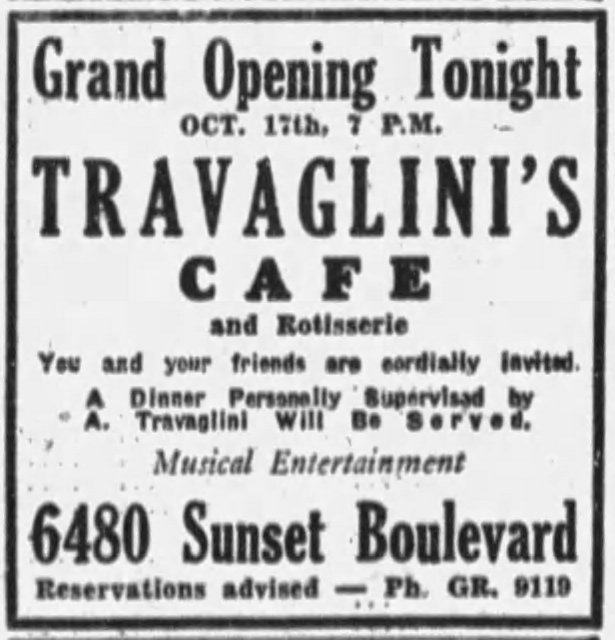 Achille Travaglini was a well-know name to Los Angeles diners by this time. His first restaurant opened in the King Edward Hotel downtown at Fifth and Main streets. The King Edward opened in 1906, the same year that A. Travaglini came to the USA from Italy. 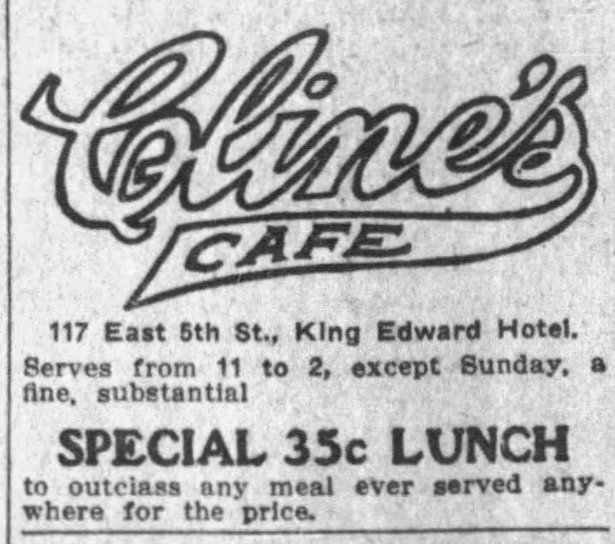 Gus Cline operated the cafe at the Kind Edward from 1908 to 1909, serving German and Hungarian dishes. In late 1909 it reopened as the King Edward Cafe with Italian and French dinners. In 1910, A. Travaglini Co. and Frank E. Zucca were running the former King Edward Cafe at 117-19 E. Fifth St., renamed the Roma Cafe, serving Italian and French dinners. A. Travaglini later moved the cafe from the King Edward to 710 S. Spring St. In July 1914, he had the space enlarged and reopened the Roma next door at 712 S. Spring. 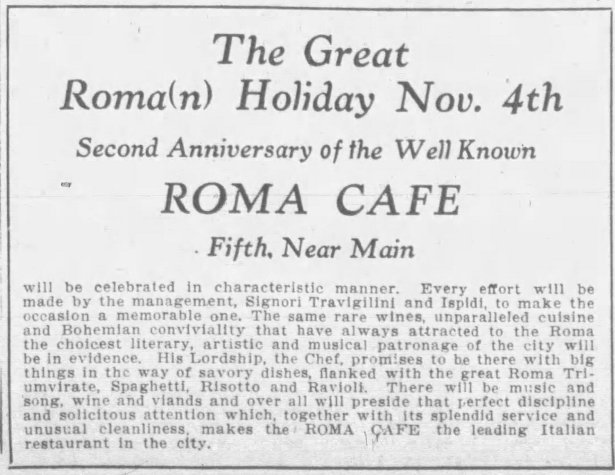 In 1923, Travaglini opened at 1801 W. 7th St. as Travaglini’s Roma Rotisserie, offering take-away meals. Two years later he expanded to 1803 to offer cafe service and groceries. This venture closed in June 1930, the fixtures and equipment sold at auction. 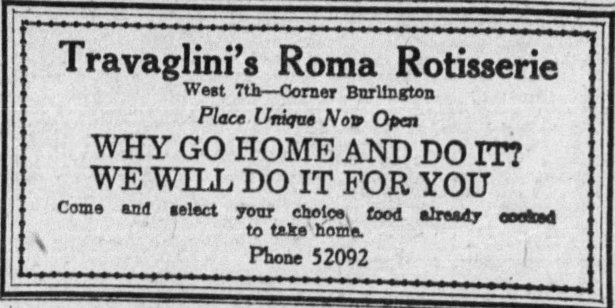 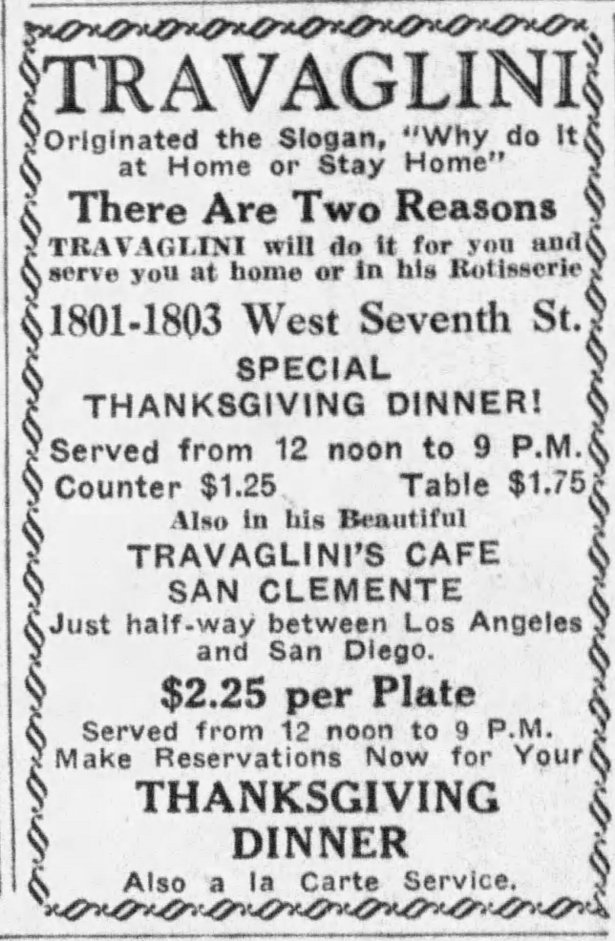 Travaglini continued to operate his namesake cafe in San Clemente, which opened in 1927, and a new cafe in Laguna Beach established in 1931.

After a two year absence from Los Angeles, A. Travaglini returned, opening at 6300 Wilshire Boulevard on July 19. 1933.

It was from here, a short time later, Travaglini’s moved to more permanent home at 6480 Sunset. 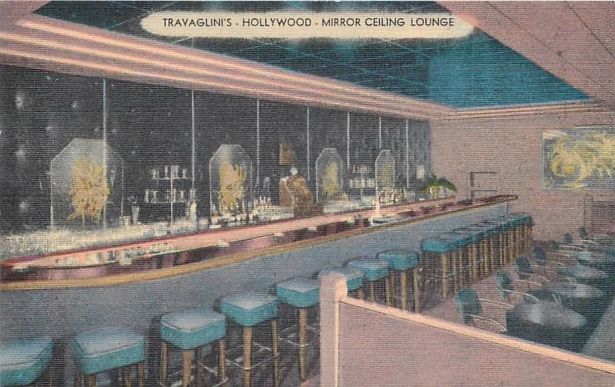 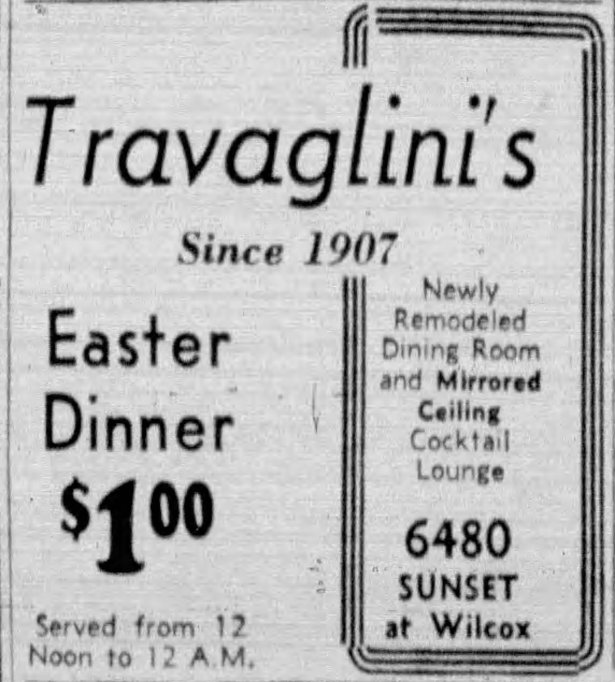 By the later 1940s, son Anthony “Tony” Travaglini ran the restaurant operation. In late 1947, he opened a second location at 17500 Ventura Boulevard in Encino, Travaglini’s One-Za-Meal Restaurant, featuring take-away meals and using the old “Why do it at home?” slogan.

April 1948, the 6480 Travaglini’s was taken over by new management, who renamed it the La Maria. 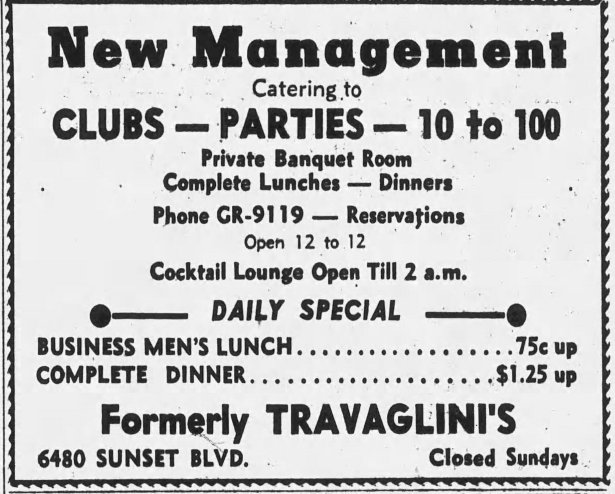 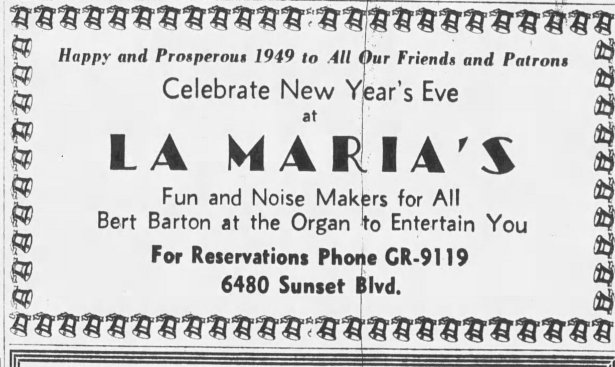 On December 28, 1950 La Maria became Rene’s, an all-you-can-eat buffet, run by Rene Pedrini, lately of the Cameo Room down the street at Sunset and Normandie. 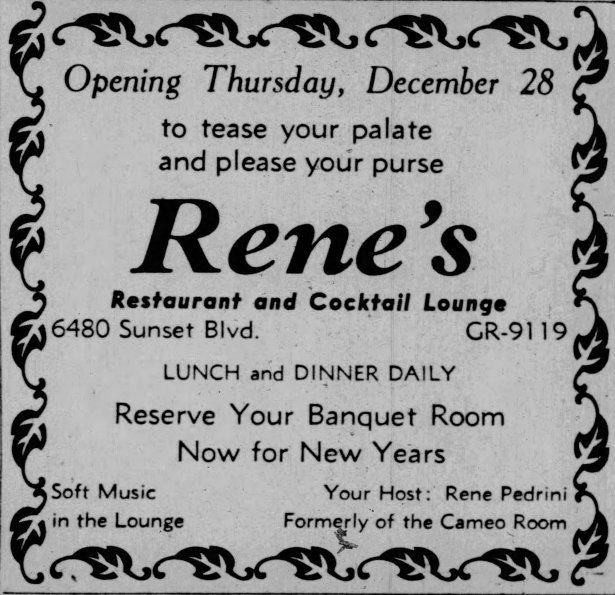 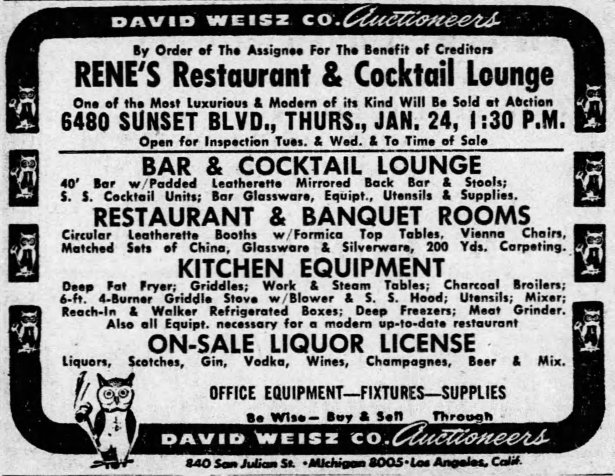 Rene’s folded by January 1952, its fixtures and equipment sold at auction. 6480’s restaurant days were now over. It thereafter served as office space. It was demolished in March 1968, the same year that Achille Travaglini passed away, at age 88. A 10-story building was constructed on the parcel, addressed as 6464 Sunset. 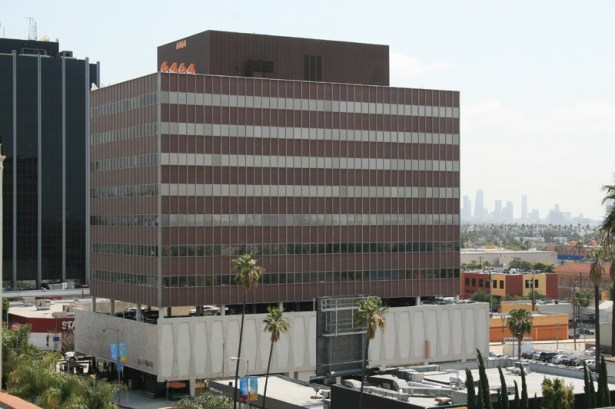 Frank E. Zucca went on to operate the Cafe De Paris at 401-407 N. Los Angeles St. He died in 1917. His widow Victuria (Victoria) applied to take over the liquor license of the Cafe De Paris and later ran her own cafe, the Madam Zucca Inn, on North Spring Street. She retired in 1932 then returned to the restaurant business in 1944 to take over the Hollywood Casino at 6000 Sunset Boulevard, operated by her son.