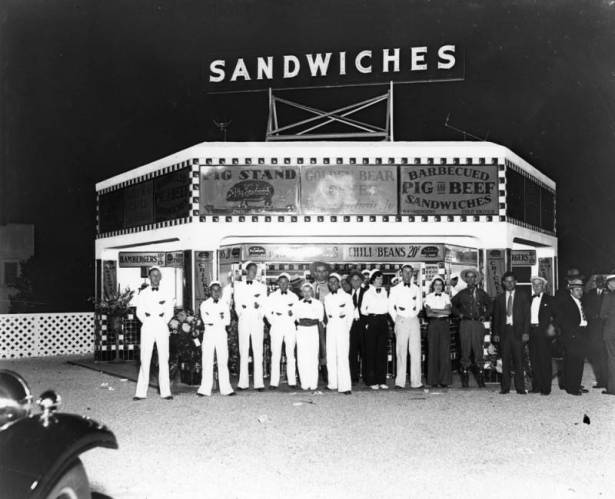 The Pig Stand drive-in was built on the southeast corner of Sunset and Vine in 1931 opposite the already-established Carpenter’s drive-in at 6285 on the northeast corner. Owners “California Pig Stands Inc. Ltd.” applied for a permit in August 1931. J.W. Stromberg was the architect. The permit for a roof sign was issued in September 1931.

Looking North on Vine c. 1932. The Pig Stand on the SE corner of Sunset & Vine and Carpenter’s on the NE corner. LAPL. 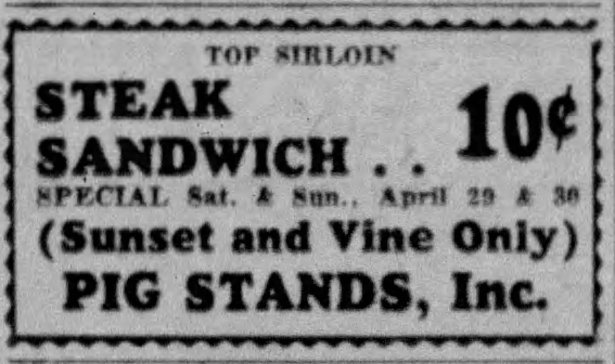 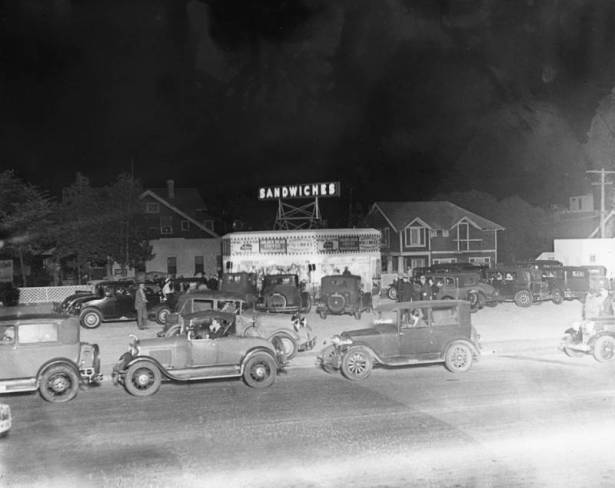 This was the second Pig Stand on Sunset. The first was at 4700 Sunset at Vermont. A permit for that location had been approved in April 1930.

By 1934, the sandwich stand was known as Pool’s operated by Clifford Valentine Pool.

By late 1935, Harry Carpenter, who also operated the namesake drive-in across the street at 6295 Sunset, took over this location as well though it continued to operate as Pool’s for the time being.

Harry Carpenter lists both 6285 Sunset and 6290 Sunset as his in the 1936 Los Angeles City Directory.

In August 1937, NBC publicly announced that it was eyeing the Carpenter’s drive-in site on the northwest corner of Sunset and Vine for the site of its new broadcasting studio. The following month, Harry Carpenter had the southeast corner drive-in site cleared, hiring the Charles Wrecking Co. to demolish and remove 3 buildings: the barbecue stand, a garage and a house. In October, 1937, Carpenter engaged structural engineer S.B. Barnes to construct a new building in a more modern, streamlined style. It was round, enclosed in glass and steel, with a wide overhang roof. In place of a mere sign was a tall pylon on top of the building and freestanding letters that spelled out CARPENTERS (later HARRY CARPENTERS). Everything was laced with neon. The Los Angeles Daily News reporting in November 1937 on major building projects planned for Hollywood (including the NBC studio and CBS down the street) noted that the drive-in was to cost $175,000.

Looking north on Vine St. from just south of Sunset. Carpenter’s is on the right. Its former location is now occupied by NBC.

The drive-in was demolished in August 1961 and the site was evavated for construction of a high-rise office building and apartment building for Los Angeles Federal Savings, to be named Sunset-Vine Tower, designed by Douglas Honnold of Honnold and Rex. Sunset-Vine Tower opened in July 1963.

Pool’s appears in the 1938 Los Angeles City Directory, which went to print in 1937 before the buildings were demolished. The Life magazine photograph of Pool’s was not taken in 1938, as some websites indicate; the buildings were gone by then.

C.V. Pool went on to assertedly have a stake in the Green Room Club, a “bogus press club” at 6735 Yucca Street (formerly the location of the Masquers Club, the “233 Club,” and the Casino Cafe, and later the famous Villa Capri), which was raided by the Sheriff’s vice squad on December 9. 1937 for illegal gambling. He later operated a restaurant at 7227 Beverly Boulevard before moving to San Diego, where he died in 1971.