It’s unlikely that patrons of The Broadway at Fourth & Broadway in the fall of 1926 noticed anything different about their shopping experience. Hosiery was still on aisle 8, books on aisles 5-6; the beauty shop was still giving marcel waves on the 3rd floor, and Toy Town on the 4th floor was being made ready for a visit from Santa Claus. But like Hamburger’s, another pioneer Los Angeles department store had passed out of family ownership. 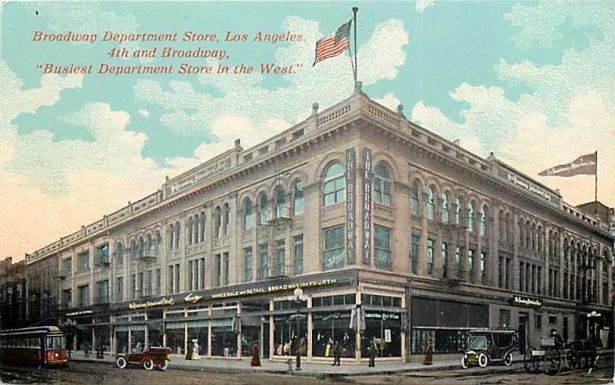 There’d been a Broadway Department Store on the southwest corner of Broadway & Fourth Street since 1895. Arthur Letts Sr., newly arrived in Los Angeles, took over the failing store there in February 1896 and built it into a wildly successful enterprise. Catering to the bargain shopper, Letts was innovative among department store retailers at the time for his pricing practices and return policy.

Unlike other stores that changed location often, The Broadway stayed right where it was, adding on as needed, and let the growing City come to it. Plans for a new 8-story cream colored brick edifice designed by Parkinson & Bergstrom were announced in late 1912. Built in stages so that the store could remain open during construction, the fully completed store debuted in 1915. The Broadway also leased space in the upper three floors of the new (1914) Clark Hotel on Hill St., which abutted it to the west, and had its own entrance from Hill Street through the lobby of the hotel.

Inside it was like a small city, with a beauty salon, rooftop restaurant and full departments: clothing, furniture, rugs, perfume, books, groceries, cosmetics, household goods, sporting goods, yardage- if The Broadway didn’t sell it, you probably didn’t need it. The multi-level bargain basement was billed as the “store within a store.”

In April 1923, The Broadway revealed plans for its Fourth Street expansion on the site of the old Sherman Hotel. Soon after, the 60-year old Arthur Letts, Sr. fell ill and died on May 18, 1923. The pioneer merchant was much mourned by his employees and the community. Son Arthur Jr. took over as head of the store. The 11-story addition had a gala “informal opening” from November 8-10, 1924.

The new addition had two-way escalators from the basement to the 4th floor and elevators to all floors. 11-9-1924.LA Times

In February 1926, The Broadway proudly celebrated its 30th birthday.

In October 1926, Letts Jr. sold The Broadway to a group of the store’s executive management, headed by the late Letts Sr.’s son-in-law, Malcolm McNaghten. The single department store employed about 2400 people at the time. Outwardly there were few signs of the change, other than the name Letts disappearing from the store’s advertising and “Inc” appeared instead.

One of The Broadway’s main floor aisles decorated for Christmas c. 1925. USC collection.

The Arthur Letts home in Hollywood, with its formal gardens, had its own postcards.

4th & Broadway remained the company’s only store until 1932, when it took over the bankrupt H.B. Dyas store and opened Dyas’ Hollywood location as The Broadway Hollywood. The downtown store closed in 1973.

One thought on “The Broadway Department Store”