The rivalry between Notre Dame’s “Fighting Irish” and Southern California’s “Thundering Herd” began in 1926, when fans of both sides packed the Memorial Coliseum in Los Angeles to see the two teams play for the first time. So who won?

Los Angeles had seen the Notre Dame gridders before, almost two years earlier, when coach Knute Rockne, now a nationally-known sports figure, brought his undefeated 1924 team to the Rose Bowl on New Year’s Day 1925 to meet Stanford in a post-season game. Since then, USC had tried to recruit Rockne but got former Iowa coach Howard Jones instead.

The visiting Irish arrived Friday morning at the Southern Pacific’s Central Depot where they were met by a fleet of Studebakers provided by the company’s local distributor, Paul G. Hoffman, and whisked through downtown Los Angeles to the Ambassador Hotel, their home for the next two days.

Tickets for the game sold out almost immediately, but those unable to secure seats could listen to it on the radio over local station KFI, sponsored by Bullocks, the upscale Los Angeles department store. Radio played a hand in helping to popularize the sport. 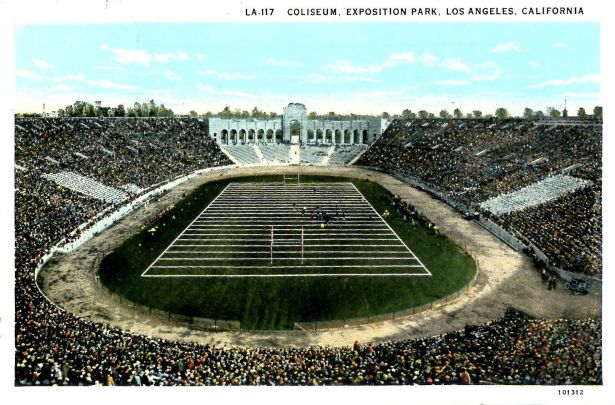 College football had become a major spectator sport by 1926. In earlier days, games were primarily attended by (mostly male) alumni. The forward pass that Rockne advocated had led to a more open, spectator-friendly game, with the result that newly-constructed stadiums were packed with cheering fans- and many of them were women. Clothing retailers were quick to realize women would want to coordinate their outfits for football games.

In December 1926, Bullocks offered faux-flowers in gold & blue for Notre Dame and cardinal & gold for USC. 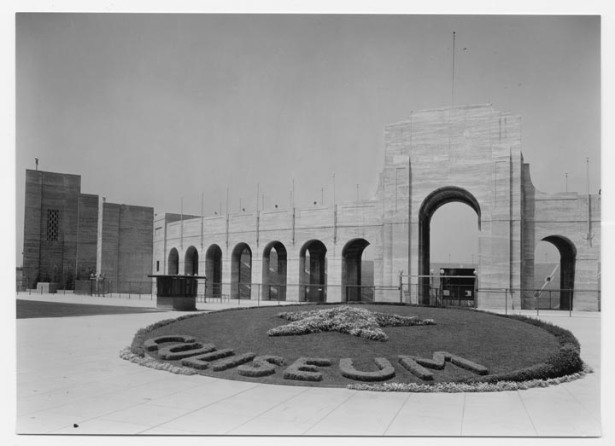 The Coliseum before its now-signature Olympic torch was added to the peristyle entrance in 1930. Designed by John and Donald Parkinson, it had been commissioned in 1921 as a memorial to World War I veterans. It opened in 1923. CSL.

Game day dawned bright & sunny. The Studebakers whisked the visiting team to the Coliseum, where some 75,000 fans cheered themselves hoarse.

Actress Sally O’Neil signing a football for coach Rockne at the game on Dec. 4, 1926. She served as Notre Dame’s mascot for the day.

USC boosters may have been surprised but pleased to see star halfback Morley Drury playing, as he had been laid up with an injury. At first it looked like it was going to be a victory for USC. Then- disaster.

In the last few moments of the game, Notre Dame’s Art Parisien (who, like Drury played despite an injury) executed a flawless forward pass to John Niemiec, who scored the winning point. Los Angeles Times sportswriter Paul Lowry called the game “a football battle that has never been excelled for brilliance, thrills and pulsating drama.”

Located on W. Jefferson St. near Figueroa, the new Shrine Auditorium opened in February 1926, replacing the older Al Malaikah Temple, which burned down in 1920. The Moorish Revival building was designed by theater architect G. Albert Lansburgh (whose work that year also included the Orpheum Theater), with John C. Austin and A.M. Edelman.

Sunday morning, the Studebakers again collected the Irish and deposited them at the depot. They departed for victory parades in South Bend, where they would meet USC in November, 1927. The rivalry was on.

For more about the rise of football’s popularity in the 1920s, see Coach for a Nation: The Life and Times of Knute Rockne by Jim Lefebvre.